[01/08/19] Dinner with Tuomas Välimäki, Member of the Board of the Bank of Finland & Iikka Korhonen, Head of the Bank’s Institute for Economies in Transition

On January 8th, the EACCNY, in partnerships with the Consulate General of Finland organized a private dinner for EACC Executive Members at the Residence of Ambassador Manu Virtamo, Consul General of Finland, to honor Tuomas Välimäki, Member of the Board of the Bank of Finland and  Iikka Korhonen, Head of the Bank’s Institute for Economies in Transition

Among the topics addressed during the dinner, the guests discussed about  the status of the Transatlantic relationship as well as US/EU trade and economic policy. Also, insights in the European Central Bank’s monetary policy as well as related European monetary and financial market policy issues were shared.  Our guests  also provided brief remarks on Russia.

[04/10/19] Vice-President of the European Commission, Mr. Valdis Dombrovskis joined the EACCNY on April 10th 2019 to discuss the Euro Zones financial stability outlook, an update on the capital markets union in Europe and what to expect for the EU financial markets in the light of Brexit

On April 10th, the EACCNY organized a private dinner for EACC Executive Members at the with the Vice-President of the European Commission, Mr. Valdis Dombrovskis.  Among the topics discusses was the the Euro Zones financial stability outlook, European financial stability and services services, and the Capital Markets Union. 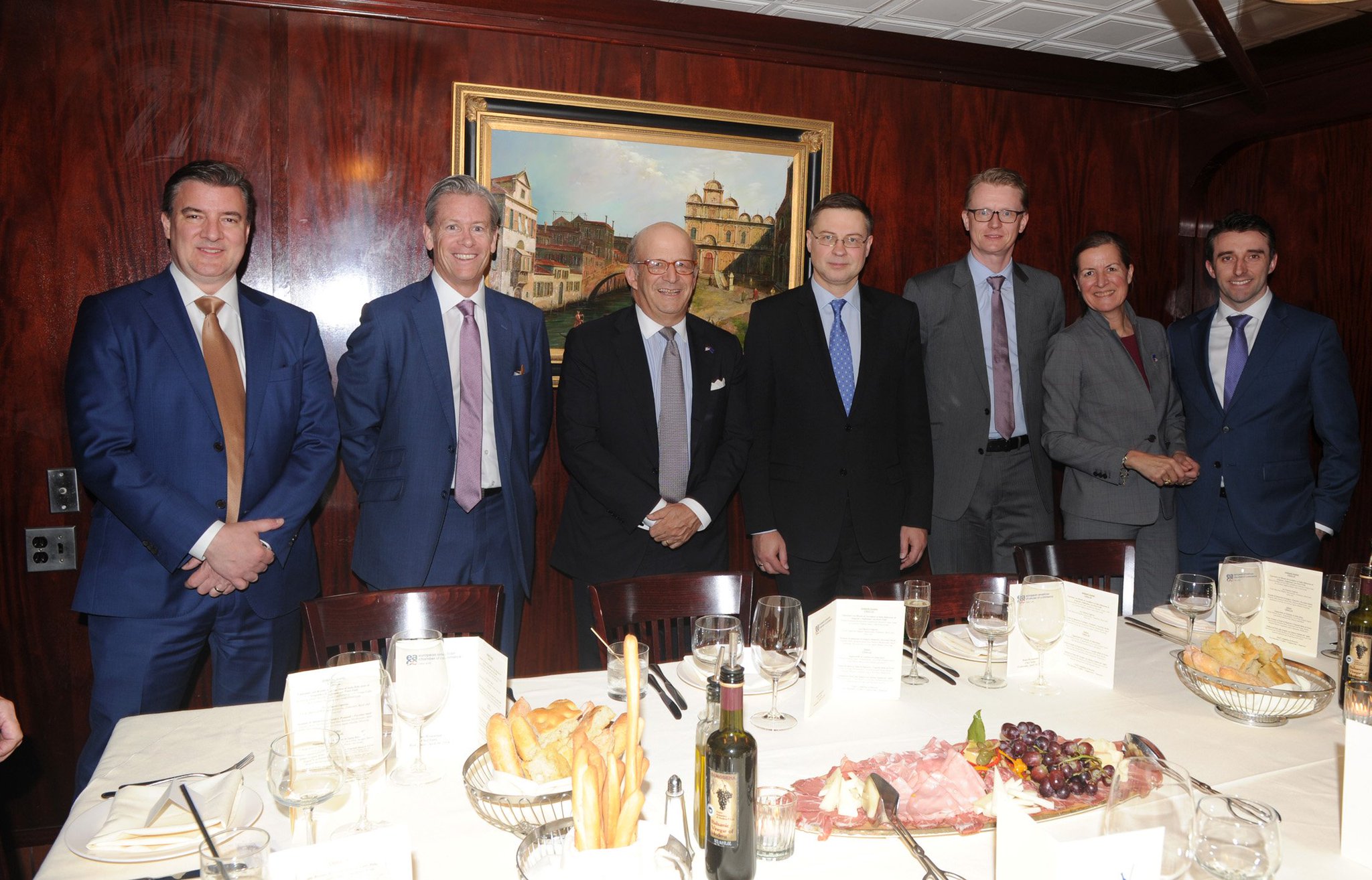 [04/16/19] Private breakfast with Olli Rehn, Governor of the Bank of Finland

On April 16, the EACCNY, in partnership with the Consulate General of Finland organized a private breakfast with Olli Rehn, Governor of the Bank of Finland, to discuss the Economic Outlook & Monetary Policy in Europe. 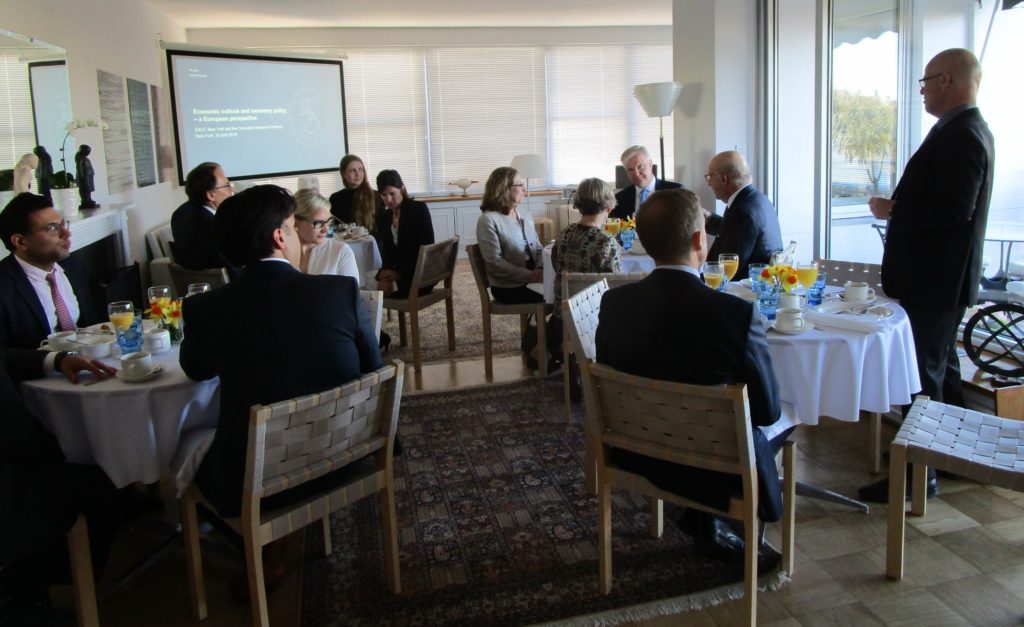 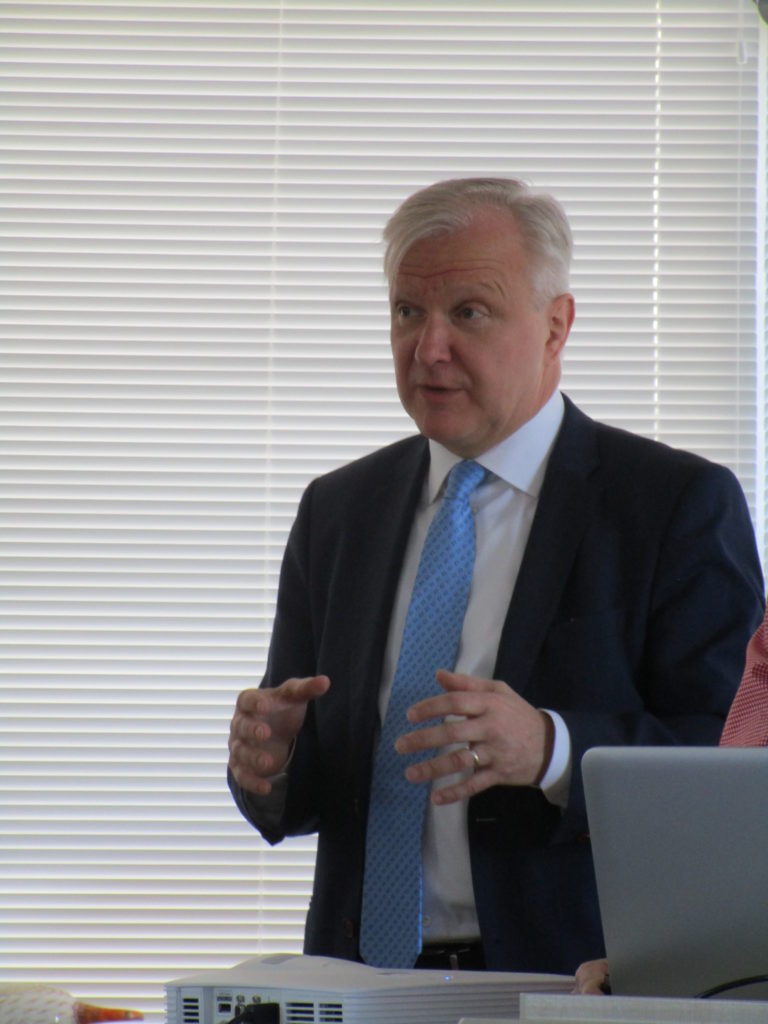 Dr Olli Rehn is Governor of the Bank of Finland. He has been Governor and Chairman of the Board as of 12 July 2018. Governor Rehn is responsible for monetary policy preparation, domestic economic policy, external communications, international affairs and internal audit. Governor Rehn is a member of the Governing Council of the ECB.

Luis de Guindos, vice-president of the European Central Bank since June 2018, sat down with Rob Cox, global editor of Reuters Breakingviews in New York on April 25, 2019 at the European American Chamber Of Commerce Economic Update Event.

The discussion took place a few weeks prior to what may be one of the most eventful elections in the history of the European Parliament. The outcome of this year’s vote will help determine the future leadership of the European Commission, the European Council and who runs the Eurozone’s central bank at a pivotal moment for the region’s monetary and fiscal policy.

Topics covered included Global trade, the investment climate, the economic outlook on 2019, outlook on international growth, investment opportunities & risks, and the impact of US and European government action.

A week before the crucial Climate Action Summit at the UN this meeting organised in collaboration with the EU Delegation to the United Nations was a unique opportunity for EACCNY Members to better understand the direction and ambition of the future EU policy and challenges, both internally and in the wider international context.

The European and international debate on climate clearly shifted in the last decade as fighting global warming emerged as a world priority. The private sector plays a key role in achieving climate objectives and discussions therefore focus on how industrial, business and trade policies can contribute to achieving the climate priorities.

Industry and energy transition will be at the center of attention at the Summit. As the UN Climate Summit is tasked to boost climate ambition, this is an occasion to discuss the direction of the European policy and what this means for business in Europe and beyond. 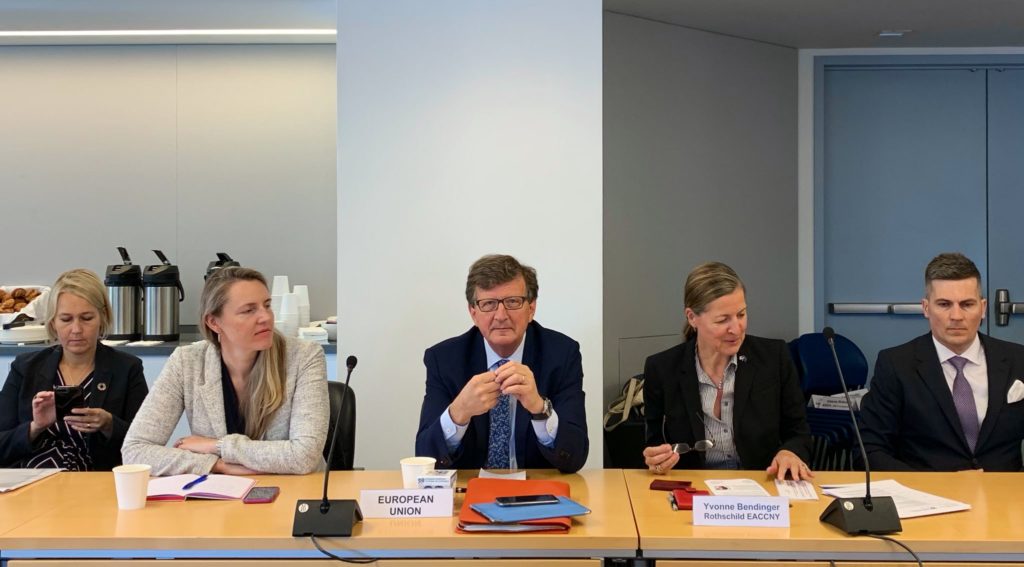 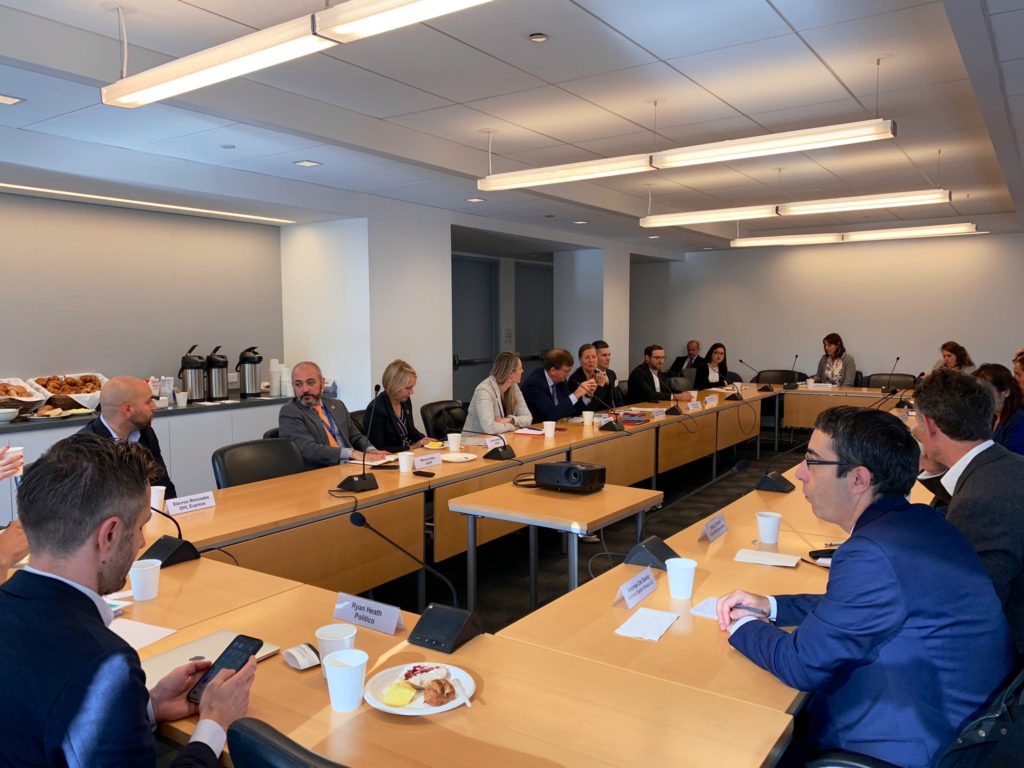 Mauro Petriccione is the Director-General for Climate Action at the European Commission since 2018. As such he is charged with managing and devising the climate policy of the EU, which is at the center of the policy programme of the new Commission.

Before his current position, DG Petriccione has had a long-standing career in the European Commission’s Directorate General for Trade, most recently as Deputy Director-General, and as the EU’s chief negotiator for the free trade agreements with Japan and Canada.

[09/24/19] Why US Investors should Invest in Europe Now: Innovative Financing Models are Generating Profits & Impact

A presentation about the innovative investment models the European Investment Bank together with the EU Commission have established to attract private monies for public good AND to help investors generate profits & measurable impact.

Investors increasingly seek investment opportunities with verifiable societal impact (e.g. green or social). In the years to come, we can expect the importance of the sector to grow further as globally, USD 24 trillion will be transferred from the generation of baby boomers to millennials, who are on average much more inclined to invest “with impact”. To provide investors with such investment opportunities, the public and private sectors can strategically cooperate. 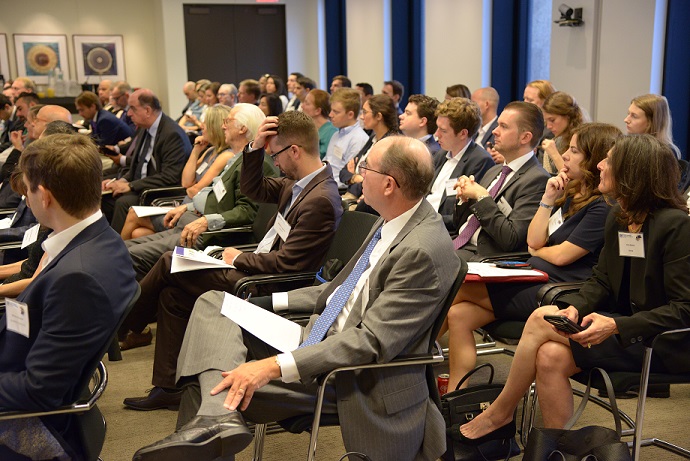 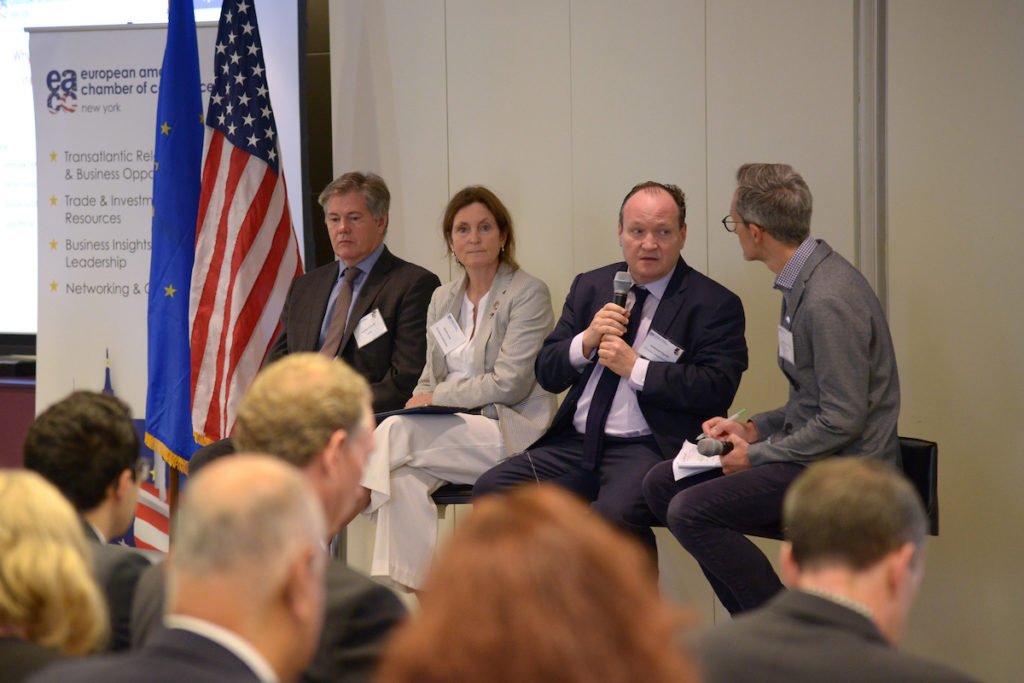 The EU soon has new leadership that among other challenges has to tackle the economic consequences of trade tensions and heightened global uncertainty while continuing to deepen the Economic and Monetary Union (EMU).

We will be making an assessment of the achievements of the Juncker Commission, but also look forward to unfinished business. Specifically, the Euro Area needs to be strengthened, by completing the Banking Union and creating an efficient Capital Market Union. Safe assets and central fiscal capacity are also important tools to make the EMU more resilient and ensure it works for all Member States.

Before his designation, he served in the European Parliament and in the French National Assembly, mainly working on economic issues.He has been Minister for European Affairs (1997-2002) and Minister for the Economy and Finance (2012-2014) in France.

As Commissioner, he is in charge of the application of the Stability and Growth Pact, as well as ensuring the economic soundness of Commission proposals and deepening the Economic and Monetary Union to create the conditions for jobs, growth and investment, and encouraging further structural reforms.

On taxation matters, Commissioner Moscovici is responsible for developing a value added tax system at EU level, improving the functioning of the internal market in both direct and indirect taxation and fighting tax fraud and tax evasion.

His responsibilities also include the development and management of an efficient EU customs union. The conversation was moderated by Richard Beales Deputy Editor, New York, Reuters Breaking Views. 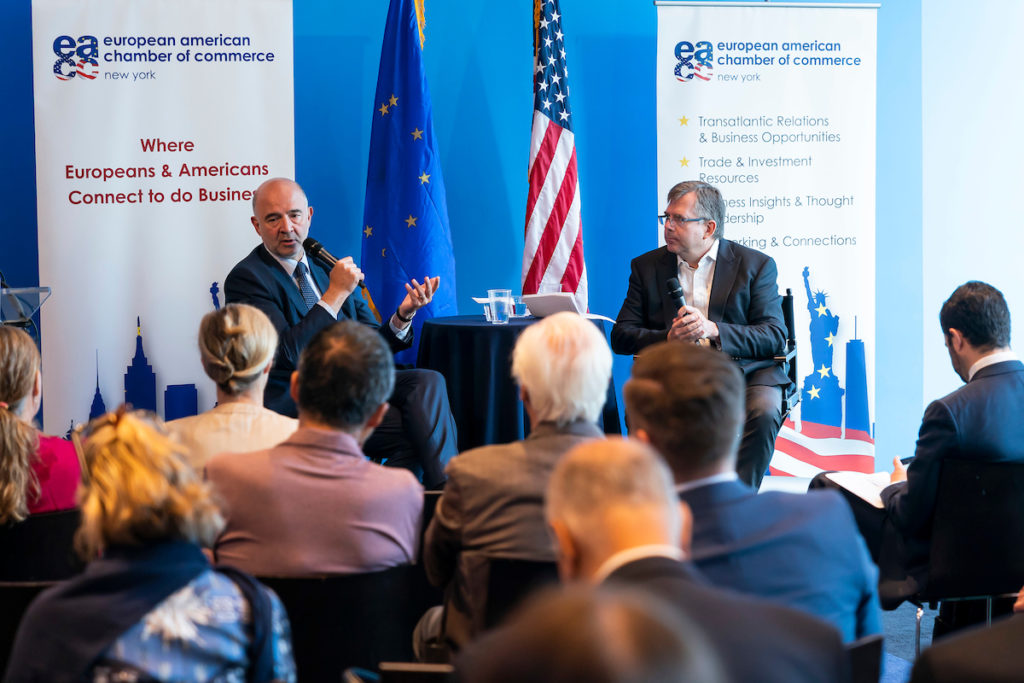 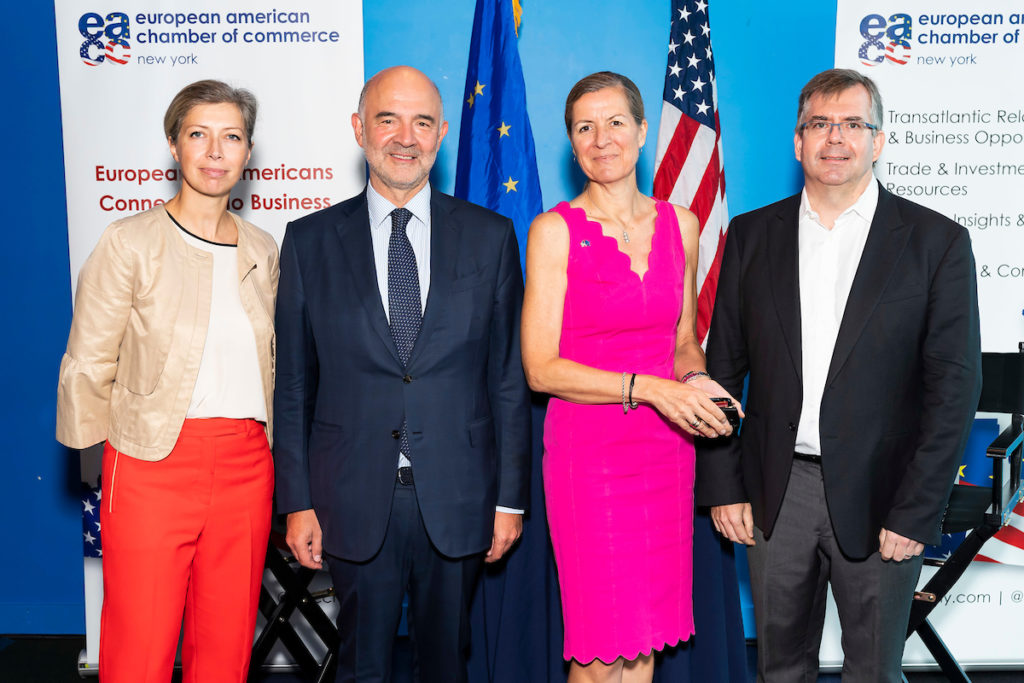 A conversation with Pascal Lamy, James Knightley & Nouriel Roubini about the future of the EU with or without Britain, how Transatlantic relations may develop depending on the outcome of the US Elections and how these developments are going to affect trade and investment on either side of the Atlantic. 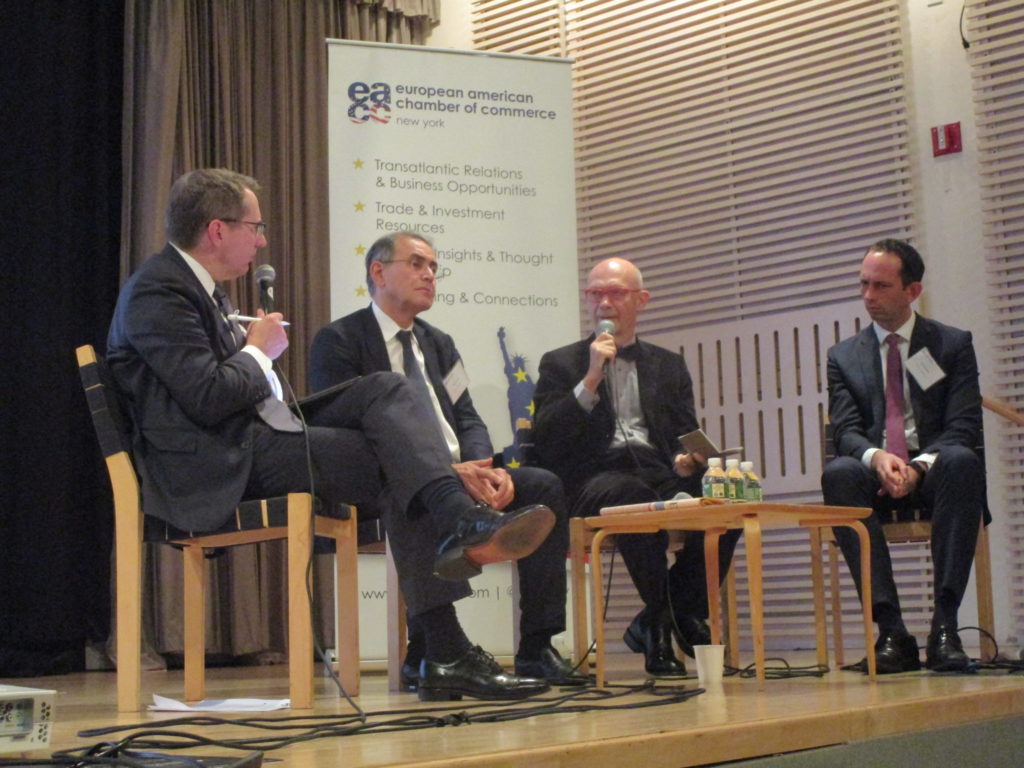 Pascal Lamy, one of the foremost thinkers and practitioners on trade issue in Europe and the world. After two consecutive 4 year terms at the helm of the WTO, his time as the European Commissioner for Trade, the French Minister of Finance and as an advisor think-tanks like European Horizons and Notre Europe, Mr. Lamy is in one of the most unique position to assess and comment on this incredible moment in transatlantic relations.

James Knightley, ING’s Chief International Economist. He joined the firm in 1998 and during that time has been responsible for the bank’s coverage on all the G7 and major West European economies. His main responsibilities currently are North America and the UK. James has been heavily involved in the Brexit debate in the UK, advising clients on likely macro and market effects.

Nouriel Roubini, professor of economics at New York University’s Stern School of Business and the CEO of Roubini Macro Associates, LLC, a global macroeconomic consultancy firm in New York. At a 2006 address to the International Monetary Fund, Roubini warned of the impending recession due to the credit and housing market bubble. His predictions of these upside-down balance sheets became a reality in 2008, with the bubble bursting and reverberating around the world into a global financial crisis – a recession we’re only recently rebounding from after a decade climb.