On February 12th, 2014, the EACC held its annual Economic Update at the New York Stock Exchange with speakers James Bullard, President of the St. Louis Federal Reserve Bank, and Nicolas Véron, a visiting fellow at the Peterson Institute for International Economics as well as co-founder and senior fellow of Bruegel. The event proved fascinating and successful, with over 200 people in attendance including prominent business leaders, foreign trade representatives, economists, journalists, and numerous representatives from various consulates. 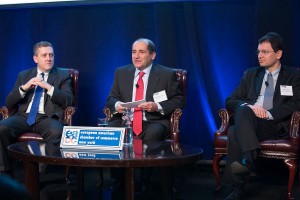 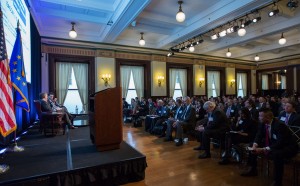 In a debate, moderated by Sassan Ghahramani, founder and CEO of SGH Macro Advisors, the discussants focused on the state of the economies in the Eurozone and the US, monetary and fiscal policy, opportunities, interest rates, and the general macroeconomic outlook for each economy. Furthermore, each shared personal insights on growth and combatting unemployment, including guidance and policy recommendations.

James Bullard is president and chief executive officer of the Federal Reserve Bank of St. Louis, positions he has held since 2008. In these roles, he participates in the Federal Open Market Committee (FOMC) and directs the activities of the Federal Reserve’s Eighth District head office in St. Louis and branches in Little Rock, Ark., Louisville, KY., and Memphis, Tenn. An economist and monetary policy scholar, Dr. Bullard has been with the Bank since 1990.

Nicolas Véron is a scholar both at Bruegel, which he co-founded in 2002-04, and at the Peterson Institute for International Economics, which he joined in 2009. Most of his research is about financial systems, financial reforms, and political economy in European and global policymaking. He has been a consultant to the International Monetary Fund and World Bank, a financial policy expert for the European Parliament, and has given testimony on several occasions at the US Senate. In September 2012, Bloomberg Markets included Véron in its second annual 50 Most Influential list, with reference to his early advocacy of European banking union.