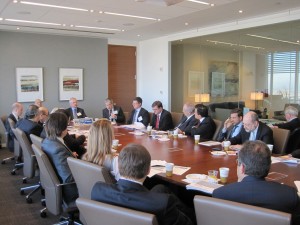 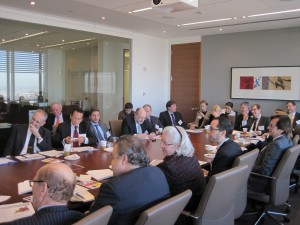 In a comprehensive presentation, Minister Gustas highlighted the strength of the Lithuanian economy citing key facts and figures, while delving deeper into what makes Lithuania unique for investors. The Minister’s presentation was followed by a lively question and answer session in which business leaders had the opportunity to voice their individual needs and interests to which the Minister and his team responded. Additionally, the Minister touched on the country’s goals and accomplishments during Lithuania’s presidency of the Council of the European Union.

Evaldas Gustas was appointed Minister of Economy in 2013, just before Lithuania took helm of the EU Presidency in the second half of the year. Prior to his role as Minister, Mr. Gustas served in a number of executive positions in the Ministry of Interior of Lithuania. Additionally, Mr. Gustas worked for the Lithuanian Central Bank and before his roles in the public sector, held various positions in the private sector.