On February 27th, 2014, in partnership with the United States Department of Commerce, the European American Chamber of Commerce in New York (EACCNY) held a Roundtable about where T-TIP negotiations currently stand.

The Roundtable featured Seward “Skip” Jones, Executive Director (Europe, Middle East and Africa) of the International Trade Administration and the U.S. Department of Commerce, and Damien Levie, Head of the Trade and Agriculture Section of the European Union Delegation in Washington D.C. via teleconference. The discussion was moderated by James Rosener, president of the EACCNY. 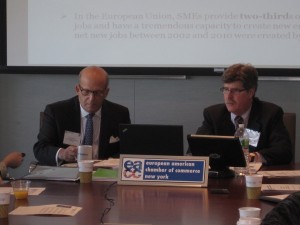 Skip Jones is responsible for overall coordination of the trade policy and trade promotion work for the Europe and Eurasian regions within the Global Markets unit of the International Trade Administration. With staff around the United States, in Washington and in various countries around the world, Global Markets promotes U.S. exports, especially among small and medium-sized enterprises (SMEs), advances and protects U.S. commercial interests overseas and attracts inward investment into the United States. Skip served as Deputy Assistant Secretary for Trade Agreements and Compliance, overseeing ITA’s work in support of the WTO Doha Round and the Trans-Pacific Partnership and Transatlantic Trade and Investment Partnership negotiations and other multilateral trade and investment policy initiatives.

Before coming to Washington, Damien Levie was a member of the Cabinet (personal office) of EU Trade Commissioner Karel De Gucht from 2009 to 2012. He subsequently headed the USA and Canada team of the Directorate General for Trade at the European Commission. During that period, he contributed to the pursuit of an ambitious EU trade policy agenda with the Americas, in particular the launch of the Transatlantic Trade and Investment Partnership (TTIP) negotiations between the U.S. and the EU, for which he was deputy chief negotiator. Damien joined the European Commission in 2001. 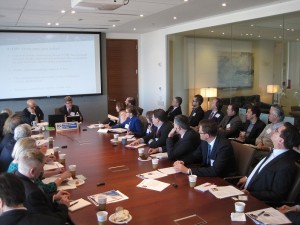 Mr. Jones and Mr. Levie addressed a select group of 30 people and spoke candidly about the status of the T-TIP negotiations. Following the discussion, they answered questions from the audience.