On April 28, 2015, EACCNY in partnership with the Embassy of Portugal to the United States and EACCNY member AICEP Portugal Trade & Investment Agency, hosted a breakfast with his Excellency Paulo de Sacadura Cabral Portas, Deputy Prime Minister of Portugal. The event was held at the Harvard Club in New York City. 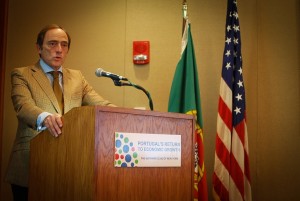 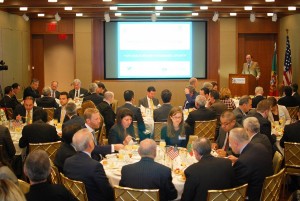 At this breakfast, the Deputy Prime Minister addressed a select audience comprised of EACCNY members and invited guests, among them investors from the United States and Europe.

In his speech, Prime Minister Portas shared insights into Portugal’s return to economic growth and the policies his government instituted to revitalize its economy. He outlined some of the initiatives that Portugal has deployed to attract investment and spur growth. The presentation was followed by extensive Q&A from the audience.

Paulo Portas was born in 1962, is a Law graduate from the Portuguese Catholic University, where he taught History of Political Thought in 1996. Previously a journalist for Tempo, A Tarde and Semanário newspapers and other media, he founded the weekly newspaper O Independente in 1988, of which he was director. He also founded and directed an opinion poll centre.