June 11, 2013 — As part of his visit to New York, Deputy Prime Minister and Minister of Foreign and European Affairs of the Slovak Republic Miroslav Lajčák today attended a breakfast meeting at the European-American Chamber of Commerce (EACC), at which he made a presentation on the topic “From Reform in Slovakia, through European Integration towards a Transatlantic Trade Agreement”. 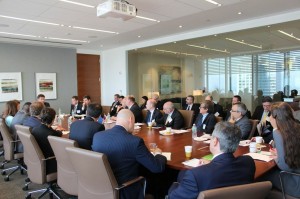 The event was scheduled to meet with major investors and entrepreneurs who are interested in the development of the economic situation in the European Union and Slovakia. EACC is a renowned organization preparing similar events for members and government ministers from different states of the European Union as well as educational programs on matters affecting business between Europe and the U.S.

The conversation was moderated by James Rosener, the President of EACC New York and Managing Partner of the law firm Pepper Hamilton, and held with the participation with representatives of companies already operating in Slovakia, as well as EACC members including potential investors, and journalists.

Minister M. Lajčák in his speech praised the reforms implemented Slovakia during the twenty years of independence, as well as the achieved integration efforts within NATO, the EU and the euro area. In this context underscores the Slovak government to continue reforms. It also reported on the National Reform Programme, which aims to implement measures to achieve stable economic growth and employment. 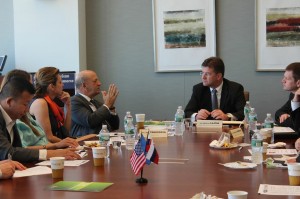 Minister M. Lajčák in his presentation informed the participants of the event about economic indicators Slovakia, appropriate investment and business environment in Slovakia, which is mainly the stable political situation, favorable geographical position, high-quality workforce and achievements in different areas of the economy. The Minister gave the example of the automotive industry, where the SR has become a major investment destination. He stressed that the United States is the twelfth largest investor in Slovakia and gave examples of U.S. companies that have already invested and founded his company in Slovakia. Slovakia introduced as the country where it pays to invest in science, research and new technologies.

Minister M. Lajčák expressed support for the upcoming transatlantic free trade agreement between the EU and the USA, which will strengthen interdependence and cooperation on both sides of the Atlantic.