EACCNY in partnership with Fordham University hosted a indepth briefing on the European Banking Union and its effects on the global financial markets.

A top-level panel with experts from the European Union and the United States the panelists covered topics such as:
• The financial architecture in the European Union and the US markets – differences and similarities
• A status update on the European banking union, the SSM, Single Resolution Mechanism, Stress Tests & the Asset Quality Review (AQR)
• Implementation of the banking union across Europe & how it is contributing to Europe’s financial stability
• How will the banking union and the single rule book (for Capital requirements, Deposit Guarantee Schemes and Bank recovery and resolution) effect U.S. market participants. 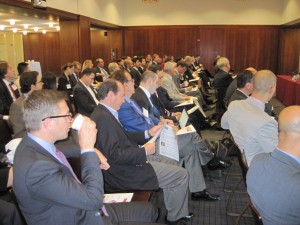 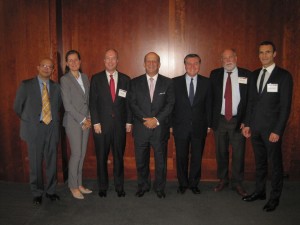 • Thomas Wieser is a Key advisor to the Ministers of Finance of the European Union countries.
• Thomas Philippon  specializes in financial economics and is the author of Capitalism heirs. The French crisis of labor. He is an administrator of the European think tank EuropaNova.
• José Viñals was previously Deputy Governor at the Bank of Spain and served on a range of advisory and policy committees at the central bank and within the European Union, including as Chairman of the European Central Bank’s International Relations Committee
• Douglas J. Elliott is an expert on the financial sector worldwide and its regulation, on pensions both corporate and state and local, and on the eurozone and its economic and financial governance, including the Euro Crisis.