With the results of the US election upending many forecasts, organizations are looking for new opportunities in Europe despite uncertainties around increasing regulation, economic growth, interest rates and political change.

The European American Chamber of Commerce (EACC) along with HSBC hosted David O’Sullivan, the Ambassador of the European Union to the United States for an evening of analysis and a panel discussion of major trends that will shape the way businesses go to market.

Executive Director of the EACC-New York, Yvonne Bendinger-Rothschild welcomed the audience by highlighting the importance of ongoing dialog: “The European American Chamber of Commerce provides a neutral platform for a dialog between the UN and Europe. We are non-political and focus solely on business related issues. Especially in turbulent times, it is important to educate the business communities on both sides of the Atlantic about the opportunities and challenges they face,” she said. “Discussions like the one today help American and European executives better understand the environment they do business in and based on that make better educated business decisions.”

After setting the stage with the political context, the panelists joined for further discussion of what the business community on both sides of the Atlantic can expect from the new administration. Ambassador O‘Sullivan was joined by a panel of experts which included Nick Giordano, US Tax Policy Leader, Washington Council, ERNST & YOUNG, Leonard Mortimore, SVP & Co-Head International Subsidiary Banking, HSBC, and Jose Rasco, Managing Director, Head of Investment Strategy, HSBC PRIVATE BANK. 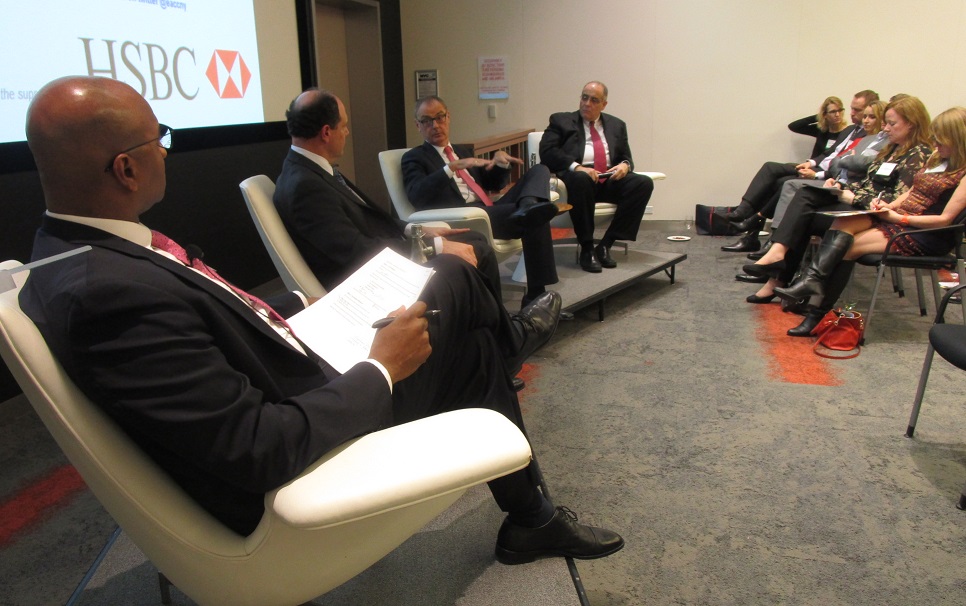 Characterizing the political mood in New York and Washington D.C., Ambassador O’Sullivan said, “New York is literally abuzz with interest. It would have been exciting, whatever the outcome. Indeed, a new administration is always exciting.”

As speculation on President-Elect Trump’s cabinet and personnel continues to make headlines and dominate news cycles, the Ambassador cautioned that incoming presidents have upwards of 4,000 positions to fill, and with past administrations, this process can take up to six months.

Nick Giordano, US Tax Policy Leader, Washington Council, ERNST & YOUNG, characterized the President-Elect’s campaign as centered on open markets and fast economic growth through rapid tax reforms, regulatory reforms and major infrastructure investment. “There will be a lot of procedures and rules in order to take these policies and proposals and turn them into legislation that will get votes … will be a challenge.”

Europe as a whole, is of utmost importance to the business community on both sides of the Atlantic, Ambassador O’Sullivan acknowledged the challenge of forecasting in the current climate.

One scenario O’Sullivan sees a renewed focus on bilateral deals benefiting both the US and the EU. While President-Elect Trump has been critical of regional free-trade agreements such as the Transatlantic Trade and Investment Partnership (T-TIP) and NAFTA, O’Sullivan said transatlantic trade would remain vital, and US and EU relations remain important. As Europe represents 37% of world trade and has five of the world’s top 10 economies, maintaining strong ties between the US and Europe would benefit organizations looking to growth outside their current markets via international connections.

“The United States is still important terms of influence, military expertise and economic power, not just in Europe, but globally.” While the EU has had to contend with complex economic situations such as widespread unemployment, uncertainty about immigration and slowed recoveries in Greece and Italy for example, O’Sullivan stressed that Europe is has turned the corner: “Don’t underestimate the transformation and the investment in change. Europe is open for business as has an ambitious trade agenda.”

Likening the UK’s vote to leave the EU, which surprised many economists, to the recent US election results, Ambassador O’Sullivan maintained that, “Support for the EU in Europe has gone up since Brexit.”

“The biggest myth about Europe under the EU is that it is a homogenized unit,” said O’Sullivan. “We’re all part of the single market, 19 of us are part of the single currency, we have common rules we have agreed upon … but there is huge diversity of practice.”

Going forward, one challenge the EU must address is defense and military procedure for Europe, which will additionally impact industrial businesses. While the EU has increased funding and addressed rule changes for sharing intelligence and resources within Europe, without Great Britain as part of the EU, military activity will have to be renegotiated.

Jose Rasco, Managing Director, Head of Investment Strategy, HSBC PRIVATE BANK indicated opportunities arise can with unexpected events like Brexit. In the days after the referendum, British travel agencies reported an inflow of bookings from China into London because of the currency difference. Additionally Chinese are acquiring assets in Europe because of the currency difference. Currencies are one area where non-UK businesses and consumers have benefitted post-Brexit.

Trade policy was a major topic during the election; however, the panel noted that we are not hearing much about trade in the transition. Currently, the EU and the US have strong ties, boasting the world’s largest bilateral trade agreement. The EU continues its trade negotiations with Asia and South America, though indicators from the incoming US administration are that regional trade agreements will have to be reassessed and potentially renegotiated.

While specifics have been slow to emerge, both President-Elect Trump and Republicans in the House of Representatives have been supporters of a policy that favors activity undertaken in the US. The panel suggested that trade policy could possibly be folded into tax policy, in the way the US taxes international companies and imports and exports.

Trump’s tax proposals significantly overlap with those contained in the House Republican Tax Reform  Blueprint issued in June by Speaker Paul Ryan. Among the suggested policy changes is moving the US to a “territorial” tax system similar to that utilized by its major trading partners. The House Blueprint on tax reform also  includes a border adjustment provision similar to those used in VAT regimes.  The House Republican border adjustment proposal would exempt exports from tax and deny tax deductions for imports into the US. The  border adjustment provision would likely have varying effects on different industries.  Retailers and others who import products and commodities into the US for manufacturing or sale may see their taxes rise .  On the other hand companies that are net exporters would likely see their tax burden reduced if this concept moves through the process and becomes law.

ECONOMIC ENVIRONMENT FOR US COMPANIES LOOKING TO MAKE INVESTMENTS

From an investment viewpoint, Jose Rasco, Managing Director, Head of Investment Strategy, HSBC PRIVATE BANK, noted that economists have seen more growth indicators for the US and growth projections from economists for the have increased. The majority of these projections, including HSBC’s, are modest. Rasco cautioned that there remains the potential for the President-Elect to incorporate faster inflation forecasts and push the FED to raise interest rates.

Rounding out the discussion, Ambassador O’Sullivan emphasized how the US is already heavily invested in Europe and the two economic powerhouses are massively cross-invested. “While Brexit creates a level of uncertainty, the hope is that the US will still find Europe a profitable environment.” 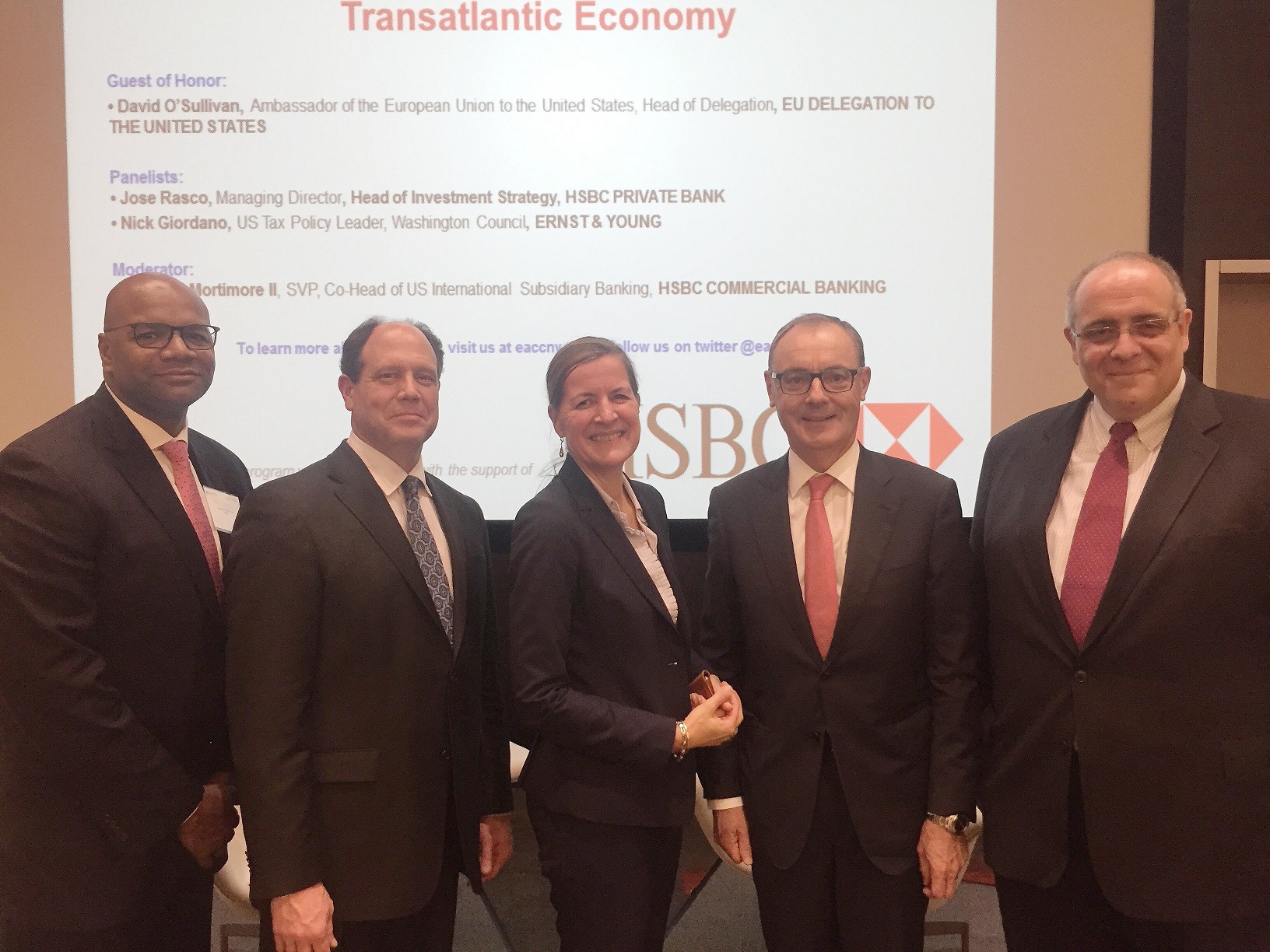