On April 30, 2015, the EACCNY hosted a Newsmaker Breakfast with David O’Sullivan, EU Ambassador to the United States, in a conversation with Daniel Bases of Reuters News. The discussion was organized in partnership with the State University of New York and the Foreign Trade Commissioners Association. The program was held at SUNY Global Center in Midtown Manhattan. 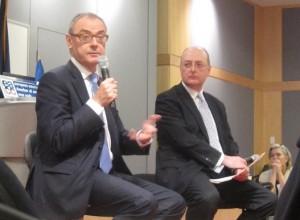 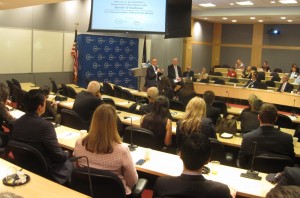 Ambassador O’Sullivan came fresh from the most recent round of TTIP negotiations, held in New York City only days earlier, and shared the most-up-to-date insights about the status of the negotiations. He also spoke candidly about the economic, political and social climate in Europe. Following the conversation with Daniel Bases, Ambassador O’Sullivan also answered questions from the audience. 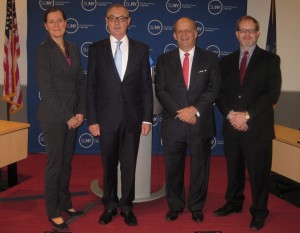 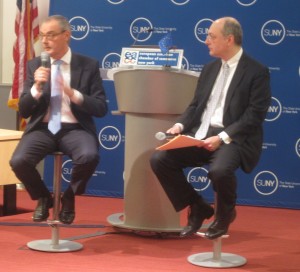 David O’Sullivan was Director General for Trade from 2005 to 2010. Previously he was Secretary General of the European Commission from June 2000 to November 2005, Head of Cabinet of Commission President Romano Prodi and Director General for Education and Training. He started his career in the Irish Foreign Ministry and spent four years in the Commission Delegation in Tokyo. He also has extensive experience in EU social and employment policy.

Daniel Bases is an award-winning print and broadcast correspondent who for the last 20+ years has written and analyzed financial, foreign policy and general news. Daniel has worked for Thomson Reuters for the past 18 years on assignments in Latin America, Asia, Europe, the United States and United Nations. In addition to high level government and C-suite interviews, he runs journalism training courses for the Thomson Reuters Foundation and moderates high level panel discussions at Japan Society in New York, New York Society of Security Analysts, IFC/EMPEA and Thomson Reuters.