This discussion focused around the economic and political climate in Europe and the United States, and provided an update on where we stand on EU/US Trade, tax reform on both sides of the Atlantic, as well as what to expect for the Eurozone and US economies. 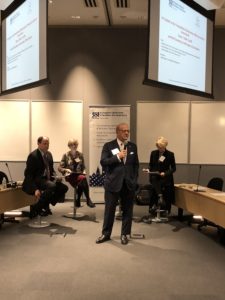 The panelists addressed the following topics:
• An overview of the European economy and what is happening in the US markets
• Ramifications of the US and EU Tax reforms for both European and American companies;
— How reforms will affect FDI and what businesses need to know about Repatriation of overseas assets.
— What European companies need to know about some problematic international tax provisions of the Tax Cuts and Jobs Act and other relevant issues of the US tax reform
• US and EU Trade Update:
— What is the status on Steel and Aluminum Tariffs and the response by the EU, what is happening on trade agreements (NAFTA, EU-Mexico 2.0 and EU-Japan)
• Brexit: a quick update on where we are and what issues are still open (incl. deadlines, expectations)
• The role and importance of the EU/US partnership in the global economy 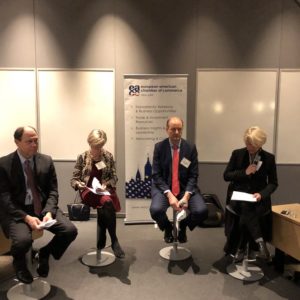