July 12, 2012 — The European American Chamber of Commerce New York hosted a Newsmaker Breakfast for the Danish Minister for European Affairs, Nicolai Wammen, during his visit to New York.

The ministers presentation “Europe – The Path Ahead” focused on the current economic situation in Europe, the main results achieved during the recently completed Danish EU Presidency and not least on creating growth and jobs across the Atlantic.

“I am not so fortunate as to live in New York every day, but I know that some US press has lately been engaged in what we might refer to as ‘euro-bashing’. I am here today to tell you that I believe the situation is too serious for blame games. It is time for more cooperation across the Atlantic and Europe is delivering results.”

The transatlantic area represents around half of the world’s GDP, and one-third of total world trade, and the Danish Presidency has given high priority to bilateral and regional free trade agreements, including securing significant progress in important discussions on strengthening trade and investment links with the US.

“I know that your businesses work day in and day out to strengthen transatlantic trade. In my view, such strengthened commercial ties between the EU and the US could provide a much needed boost to our economies, and it’s time to engage in discussions.” 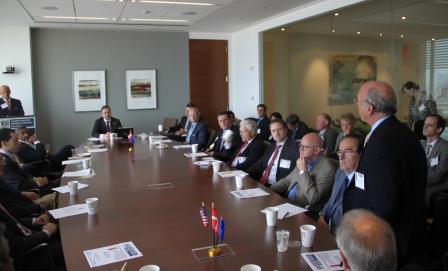 Steps Ahead
With regards to the current economic situation in Europe, the minister highlighted a number of joint initiatives that have been taken, including the so-called Fiscal Compact [the Treaty on Stability, Coordination and Governance in the Economic and Monetary Union], enlargement of joint rescue funds and strengthening of financial regulation and supervision. He also emphasized that this does not mean that Europe is “home free”:

“There is no silver bullet. We have taken important steps in the right direction on the EU level, but it is also the individual EU member states that have the competency in this area.”

In addition to the efforts to stabilize the European economy, the Danish presidency has also increased efforts to promote growth, in a “two-pronged approach”.

“Very few member EU member states have the option of increasing spending. There is no alternative to the consolidation measures. Therefore we have had to find smarter ways of boosting growth in Europe,” said the minister, referring to the new “growth pact”, reached at the end of the Danish Presidency. After the presentation, the minister engaged in a thorough Q&A session with the audience, answering questions on how to strengthen commercial ties between the US and EU, how to strengthen the economic and financial supervision and how to create growth without falling deeper into debt.