On October 11 2012, over 130 guests gathered at Bloomberg LP, New York, to mark the launch of the Henry Jackson Initiative (HJI) in the US. 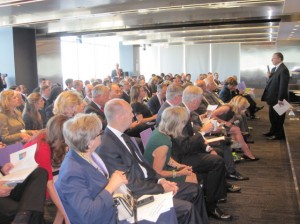 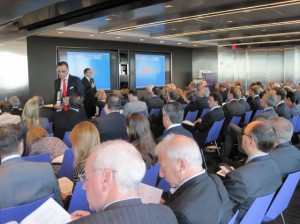 The New York launch event of the Henry Jackson Initiative was opened by Norman Pearlstine, Chief Content Officer at Bloomberg who introduced Lady Lynn Forester de Rothschild, co-chair of the HJI’s inaugural task force for Inclusive Capitalism. Lady Lynn started off the program with a short presentation on the genesis of the HJI, the organisation’s objectives and the urgency for business to become engaged in its work. She summarized her points with an illustration by the economist Lawrence Katz comparing the US economy with an apartment block where, on account of growing inequality, the penthouses have become more spacious whereas the apartments in the middle have become squeezed, the basement is flooding but, worst of all, the elevator (signifying social mobility) is broken.

The first of the morning’s keynote speakers was Lawrence Summers, Charles W. Eliot University Professor and President Emeritus of Harvard University. Mr Summers gave his support to the HJI’s white paper and, in particular the vision of inclusive capitalism. Mr Summers also urged the HJI to think more about what a truly inclusive capitalism would look like and how the entire business environment and government policy ecosystem must contribute towards this vision. 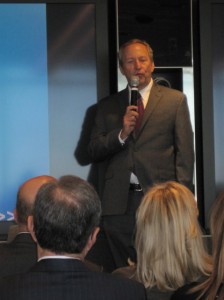 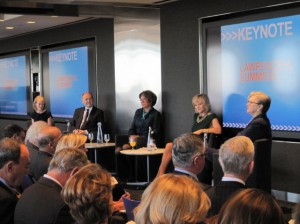 The panel discussed whether the pathways chosen for focus by the HJI were applicable on both sides of the Atlantic (the pathways are education for employment, support of SMEs and start-ups and long term governance) and what business can do to work towards a truly inclusive capitalism in which the benefits of the system are more broadly shared by all.

The discussion was followed by an interview conducted by Norman Pearlstine with Glenn Britt, CEO of Time Warner Cable Inc. on ‘Connect a Million Minds’, a five-year, $100 million cash and in-kind philanthropic initiative to address America’s declining proficiency in science, technology, engineering and math (STEM).

The floor was then opened up the audience to ask questions and to answer those posed by Bloomberg hosts Trish Regan, of Street Smart, and Diane Brady. The event was concluded by Dominic Barton, Global Managing Director of McKinsey and HJI task force for Inclusive Capitalism co-chair, who gave a call to business action to adopt actions and behaviours in line with the vision of inclusive capitalism and the pathways highlighted in the HJI’s report. 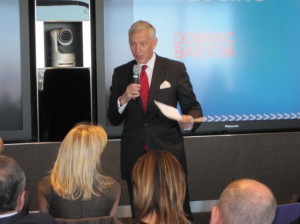 The creation of the HJI was well documented in global media at the time of its UK launch in May 2012 and the launch of the HJI in the US was highlighted in interviews on the Piers Morgan Show on CNN, Fox Business and Bloomberg television on the evening before and day of the launch in New York on October 11. The European American Chamber of Commerce was a central part of the event, inviting its members and supporting the vision of the HJI more broadly through outreach and connecting interested parties behind the scenes.

About the HJI
The HJI is a business-led initiative that seeks to build a more inclusive capitalism through highlighting business best practice, connecting leaders for collaborative working, partnering on original projects with stakeholders and communicating the benefits of capitalism to an external audience.

The HJI supports all actions supporting a more inclusive capitalism, but focuses on three pathways in which it believes business action can deliver demonstrable outcomes:
1. Education for employment and job creation – matching the needs of today’s and tomorrow’s jobs market with the skills of the workforce
2. Supporting start-ups and SMEs – ensuring small and medium sized companies have access to financial and non-financial support and fostering en environment for entrepreneurship
3. Long term governance – reorienting business practice and the stewardship of companies away from short-termism

The essence of the HJI’s argument is that business needs to take the lead in the areas that need improvement most. These businesses understand it is in their best interest to improve the overall environment for business and the economy. As long as industry, innovation and enterprise are anchored by inclusivity and responsibility, the capitalist system that has made our societies great will continue to do so.