The EACC chapter network recently asked its members across the network in Europe and the United States a series of questions to gauge how the pandemic was impacting their willingness to gauge in a range of activities. This repeated a survey we did a few months ago.

We found some significant differences between Europe and the U.S. For example – overall, 57 percent of respondents said they had already or were prepared to return to their normal workplaces.  However, 73 percent of Europeans agreed with this position, compared to less than half (48%) of U.S. respondents.

With regard to travel, 36 percent of U.S. respondents said they’d not travel domestically until next year or until there is an effective vaccine, while 94 percent of Europeans said they were already making such trips or would do so before the end of the year (with 84 percent saying they’d already resumed such travel).  And for international travel, only 26 percent of U.S. respondents said they’d do that before the end of the year, while nearly three out of four (73 percent) of Europeans indicated that they would.

The survey was conducted September 21-24 and includes responses from our members based on both sides of the Atlantic.

The graph below is an illustration of the data points we compiled from the two surveys in July and September. Click the image to view an enlarged version. 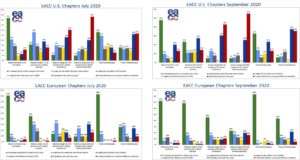 If you are a member of the EACC and would like to get a full report of this survey and additional data points, please reach out to Paolo Frazzini Meléndez at membership[at]eaccny.com.