A salient feature of the coronavirus (COVID-19) pandemic has been the sharp and deep decline in mobility, which has caused a slump in tourism, trade in travel services and consumption by non-residents. Lockdowns and social distancing measures led to strong declines in otherwise stable services consumption. This box takes stock of developments in the tourism sector, discusses how the impact of these developments on consumption has varied across countries and reviews the near-term prospects for a recovery in tourism and travel. 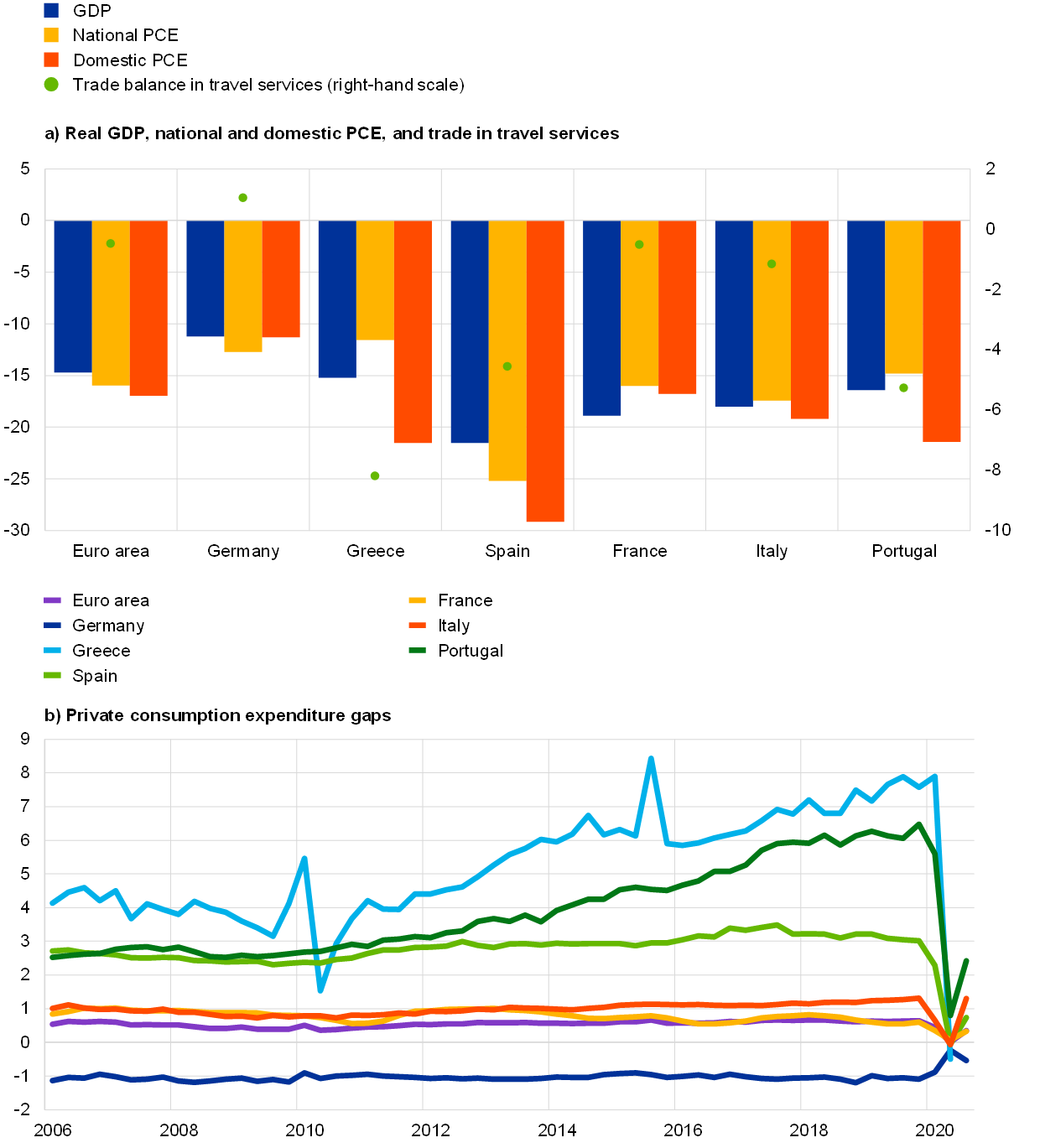 Sources: Eurostat and ECB staff calculations.
Notes: Euro area represents the euro area aggregate. In panel (a) the trade balance in travel services is shown as a share of GDP. In panel (b) PCE gaps are computed as the difference between domestic PCE and national PCE, which corresponds to the net balance of foreign residents’ expenditure domestically minus domestic residents’ expenditure abroad. In panel (b) the latest observations are for the third quarter of 2020, with the exception of Greece. For the euro area the third quarter of 2020 has been estimated based on partially available information for euro area countries, which does not include data for Greece and Luxembourg.

A partial rebound notwithstanding, the data show that the foreign tourism sector remained depressed in the third quarter of 2020. Data on tourist arrivals continued to show significantly low figures for foreign arrivals when compared with the situation before the outbreak of COVID-19 (see panel (b) of Chart B). By contrast, domestic tourism remained relatively resilient and was able to partially compensate for the loss of foreign tourism, despite remaining below the levels seen in 2019. During the summer, short-haul destinations were more in demand and several governments launched promotional initiatives.[4] However, the latest available data suggest a fragile and incomplete recovery. In the euro area, tourist arrivals were less than two-thirds of the levels seen a year earlier. Tourism in countries relying on foreign arrivals, such as Greece and Portugal (see panel (a) of Chart B), still remains far below normal levels. Likewise, turnover in restaurants, and less so in accommodation, recovered but still stood at very low levels, supported by domestic tourists and locals.

(panel (a): percentage of total; panel (b): ratio relative to the same quarter in the previous year) 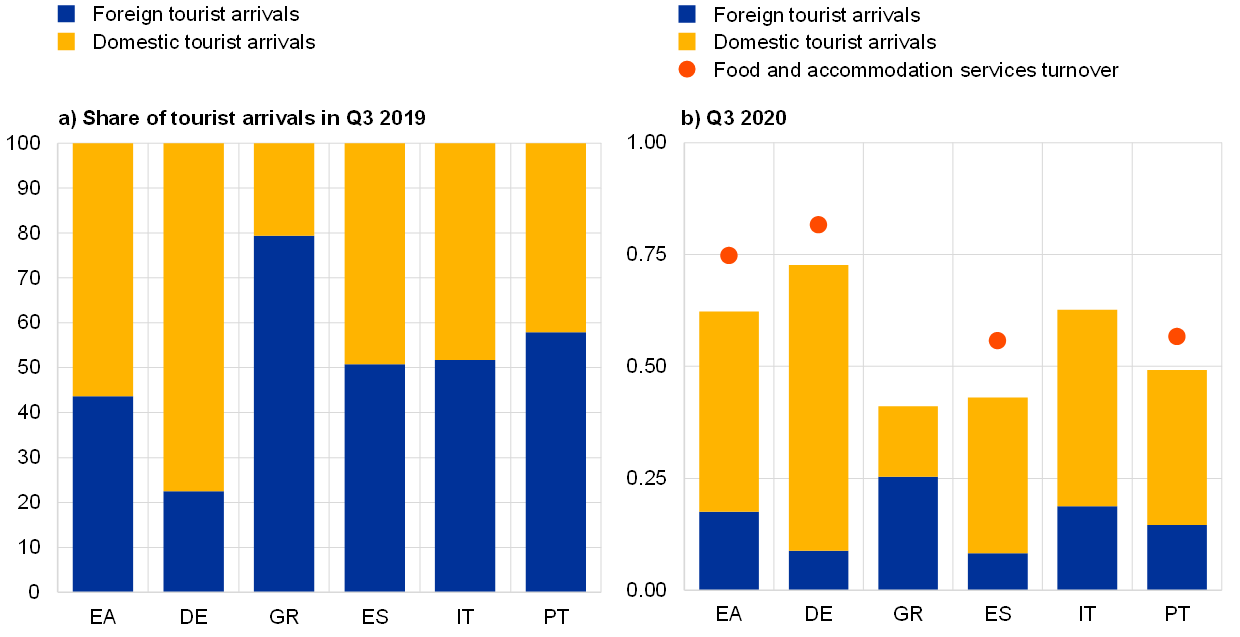 Source: Eurostat.
Notes: Owing to data availability, the ratios for tourist arrivals refer to August and September for Greece. Ratios for food and accommodation services turnover are not available for Greece or Italy.

Following the widespread resurgence of COVID-19 cases, since October 2020 most euro area countries have been reimposing restrictions. Visitors are currently subject to testing or quarantine in most countries, and entry for visitors from non-EU countries is only allowed for countries considered safe.[5] In most euro area countries, governments reimposed curfews and closed tourist attractions and recreational facilities such as museums, theatres, bars and restaurants. The reintroduction of travel restrictions since October will likely imply that the substitution of foreign tourism with domestic tourism will continue to affect the dynamics of tourism services in the near term. The latest restrictions may also alter the geographical impact of the crisis on the sector, as winter tourism destinations will be more severely affected this time.

Forward-looking indicators point to a renewed deterioration of the tourism sector as restrictions are reintroduced (see Chart C). Owing to travel bans, restrictions and renewed lockdown measures (shown by the green line), travel decreased after the summer and confidence effects are weighing strongly on bookings. This is shown by a reversal in the recovery of flight capacity (red line) which occurred across euro area countries. According to the latest data, flight capacity currently stands at about 25% of pre-COVID-19 levels. Forward-looking indicators such as PMI new orders in the tourism and recreation sectors declined again in November, staying in contractionary territory. Confidence in the accommodation industry also remains depressed and well below its historical average, as suggested by the respective European Commission confidence indicator. 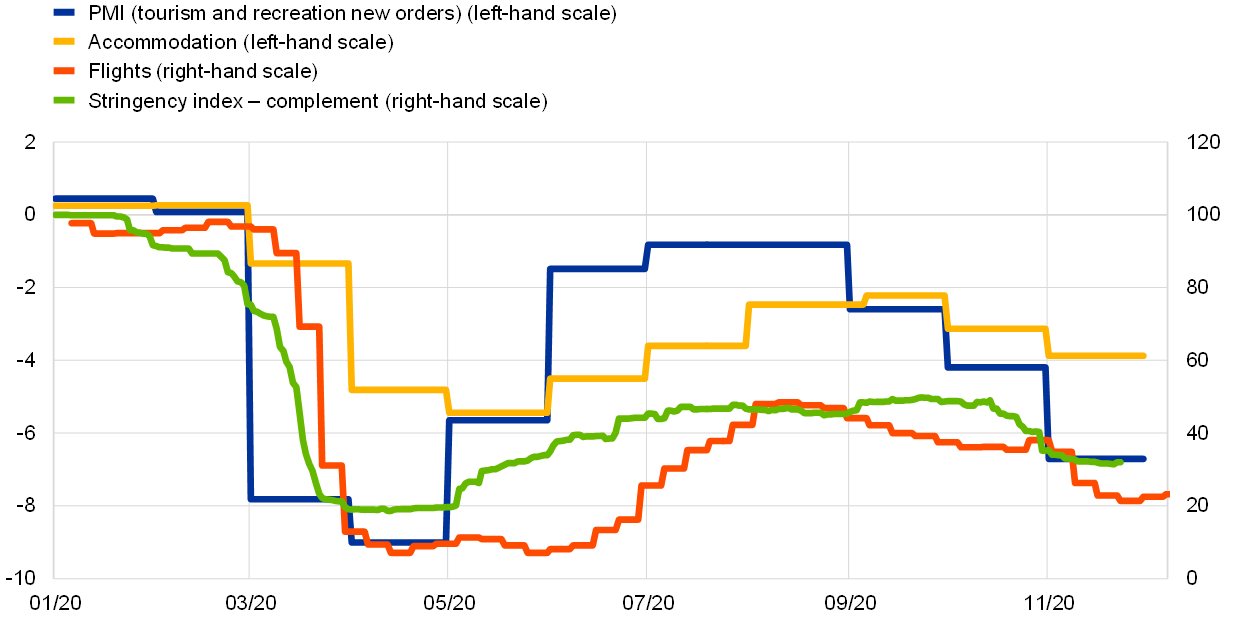 Sources: Markit, HAVER, European Commission, OAG, Eurostat and Oxford COVID-19 Government Response Tracker.
Notes: The PMI is for the EU. Accommodation is measured by the European confidence indicator. The data on flights are for Germany, Spain, France and Italy only. The stringency index is an average across euro area countries weighted by the share of tourist arrivals in 2019. Complements (100-value, where 100 is maximum stringency) of the stringency index are reported so that an increase in the series corresponds to easing and a decrease to higher stringency.

Compliments of the European Central Bank.