This is to inform you that Guillaume Martinez was unanimously elected  Chairman of the Board of EACC France as of October 19th, 2017. 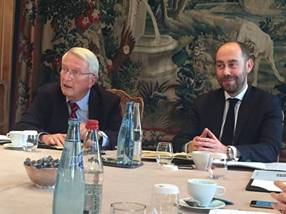 During the lunch that followed the meeting of the Board of Directors, two ancient books from the 18th century in the USA were offered to Maurice from all the administrators to thank him for his service.  Guillaume Martinez is  deeply grateful for all the dedication that Maurice showed during his tenure. EACC is in great shape today and we all owe a lot to Maurice for that. He is both a role model to Guillaume and a true friend to go to whenever Guillaume need really smart advice.

Guillaume Martinez is a Partner with the International Professional Services firm Deloitte, specialized in M&A.  Guillaume mainly focuses on European and International corporations in the Aerospace, Transportation and TMT Industries.  Between 2007 and 2010, his spouse and himself were based in New York.  Guillaume Martinez was working with Deloitte NY whereas his spouse worked at LVMH Inc..  We have three children, and the youngest one was born in New York.

Guillaume Martinez will continue to make EACC an indispensable partner for all corporations in the US and Europe by proposing new services and also by strengthening our bilateral relationships.   Our EACC Gala  to be held in Spring 2018 in Paris will be an opportunity to celebrate “the Positive Innovation” with the testimonials of EU and US corporations committed to creating value for both their stakeholders and the communities around them.  Guillaume Martinez  counts on you all to be there with us on that special night.