The twelve Member States will provide up to €2.9 billion in funding in the coming years. The public funding is expected to unlock an additional €9 billion in private investments, i.e. more than three times the public support. The project complements the first IPCEI in the battery value chain that the Commission approved in December 2019.

Executive Vice-President Margrethe Vestager, in charge of competition policy, said: “For those massive innovation challenges for the European economy, the risks can be too big for just one Member State or one company to take alone. So, it makes good sense for European governments to come together to support industry in developing more innovative and sustainable batteries. Today’s project is an example of how competition policy works hand in hand with innovation and competitiveness. By enabling breakthrough innovation while ensuring that limited public resources are used to crowd in private investment and that competition distortions are minimised. With significant support also comes responsibility: the public has to benefit from its investment, which is why companies receiving aid have to generate positive spillover effects across the EU.”

Vice-President Maroš Šefčovič, in charge of the European Battery Alliance, said: “Thanks to its focus on a next generation of batteries, this strong pan-European project will help revolutionise the battery market. It will also boost our strategic autonomy in a sector vital for Europe’s green transition and long-term resilience. Some three years ago, the EU battery industry was hardly on the map. Today, Europe is a global battery hotspot. And by 2025, our actions under the European Battery Alliance will result in an industry robust to power at least six million electric cars each year. Our success lies in collaboration, with some 300 partnerships between industrial and scientific actors foreseen under this project alone.”

Commissioner for Internal Market Thierry Breton said: ‘“The batteries value chain plays a strategic role in meeting our ambitions in terms of clean mobility and energy storage. By establishing a complete, decarbonised and digital battery value chain in Europe, we can give our industry a competitive edge, create much needed jobs and reduce our unwanted dependencies on third countries – in short, make us more resilient. This new IPCEI proves that the European Battery Alliance, an important part of the EU industrial policy toolbox, is delivering.”

The project will cover the entire battery value chain from extraction of raw materials, design and manufacturing of battery cells and packs, and finally the recycling and disposal in a circular economy, with a strong focus on sustainability. It is expected to contribute to the development of a whole set of new technological breakthroughs, including different cell chemistries and novel production processes, and other innovations in the battery value chain, in addition to what will be achieved thanks to the first battery IPCEI.

The Commission assessed the proposed project under EU State aid rules, more specifically its Communication on Important Projects of Common European Interest (IPCEI). Where private initiatives supporting breakthrough innovation fail to materialise because of the significant risks such projects entail, the IPCEI State aid Communication enables Member States to jointly fill the gap to overcome these market failures, while ensuring that the EU economy at large benefits and limiting potential distortions to competition.

The Commission has found that the proposed IPCEI fulfils the required conditions set out in its Communication. In particular, the Commission concluded that:

On this basis, the Commission concluded that the project is in line with EU State aid rules.

The project will involve 42 direct participants, including small and medium-sized enterprises (SMEs) and start-ups with activities in one or more Member States. The direct participants will closely cooperate with each other through nearly 300 collaborations envisaged, and with over 150 external partners, such as universities, research organisations and SMEs across Europe. The overall project is expected to be completed by 2028 (with differing timelines for each sub-project).

The direct participants, the Member States supporting them and the different project areas are as follows: 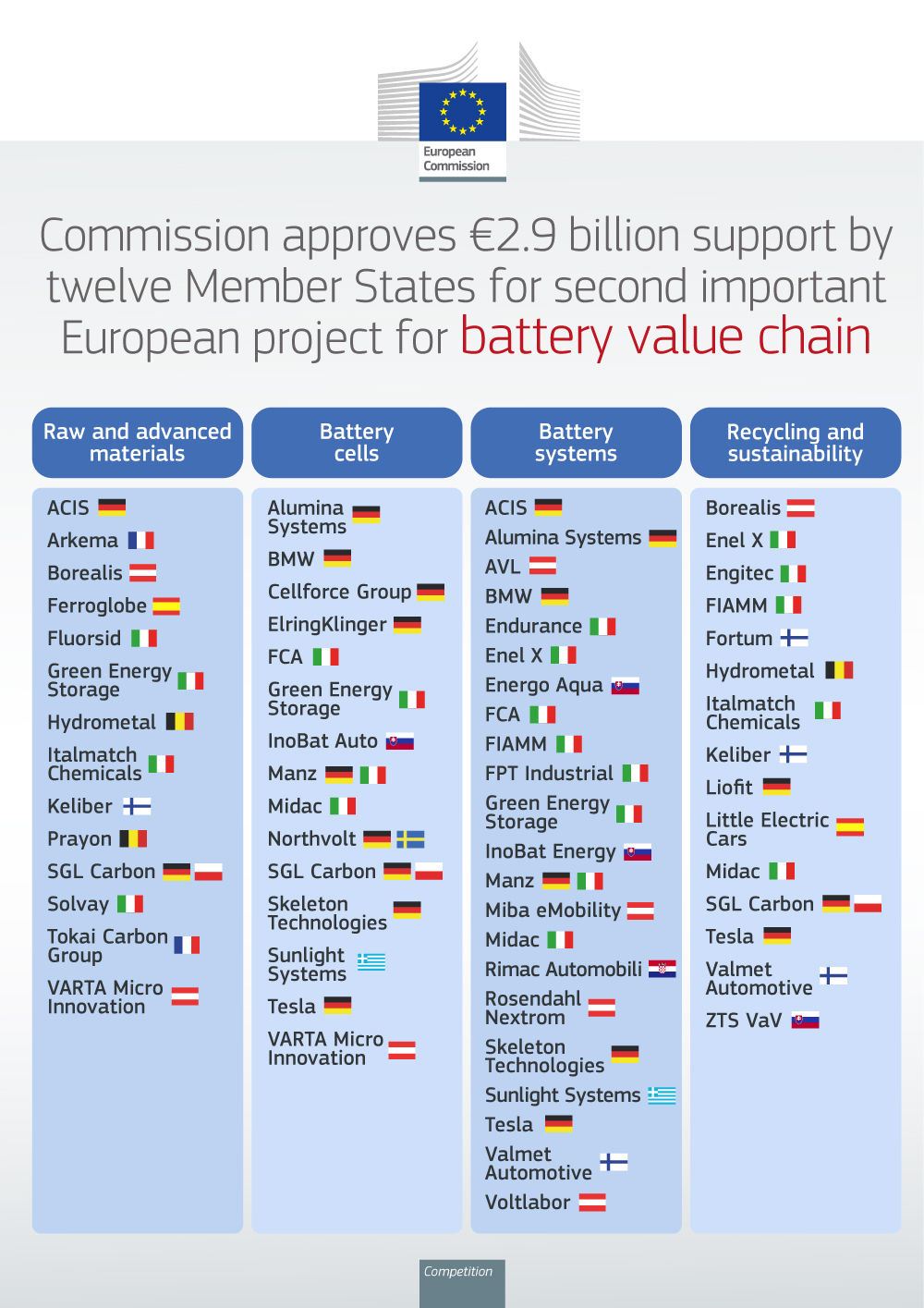 Image courtesy of the European Commission.

More information on the amount of aid to individual participants will be available in the public version of the Commission’s decision once the Commission has agreed with Member States and third parties on any confidential business secrets that need to be removed.

The Commission’s approval of this project forms part of the context of the wider Commission efforts to support the development of an innovative and sustainable European battery industry. In 2017, the Commission launched the European Battery Alliance. In 2018, the Commission adopted the Strategic Action Plan for Batteries and has promoted a wide range of initiatives as part of the plan.

In view of the growing importance of batteries in a number of areas, including notably transport and energy, a safe, circular and sustainable battery value chain will be increasingly essential. Having batteries that are more sustainable throughout their life cycle is key to achieve our ambitious climate targets. This is also at the core of the Sustainable Batteries Regulation proposed by the Commission in December 2020.

Today’s decision is the third research and innovation project based on the 2014 State aid Communication on Important Projects of Common European Interest (IPCEI), setting out criteria under which several Member States can support transnational projects of strategic significance for the EU under Article 107(3)(b) of the Treaty on the Functioning of the European Union (TFEU). The Communication aims to encourage Member States to support highly innovative projects that make a clear contribution to economic growth, jobs and competitiveness.

The IPCEI Communication complements other State aid rules such as the General Block Exemption Regulation and the Research, Development and Innovation (R&D&I) Framework, which allows supporting innovative projects whilst ensuring that potential competition distortions are limited. According to the 2019 State Aid Scoreboard, annual spending for R&D&I under the General Block Exemption Regulation continued to increase to reach about €10 billion in 2018.

The IPCEI Communication supports investments for R&D&I and first industrial deployment on condition that the projects receiving this funding are highly innovative and do not cover mass production or commercial activities. They also require extensive dissemination and spillover commitments of new knowledge throughout the EU and a detailed competition assessment to minimise any undue distortions in the internal market.

A broad range of State aid rules, including the IPCEI Communication, are currently being reviewed to ensure they fully contribute to the Commission’s green and digital objectives, following an evaluation or ‘Fitness Check’ completed in October 2020. A public consultation on a revised IPCEI Communication will be launched in the coming weeks.

Compliments of the European Commission.