In the wake of the Covid-19 crisis, the US authorities adopted an unprecedented set of fiscal measures, targeting households in particular. These measures aim at preserving the purchasing power of US households, but less than half of this additional income should be spent. 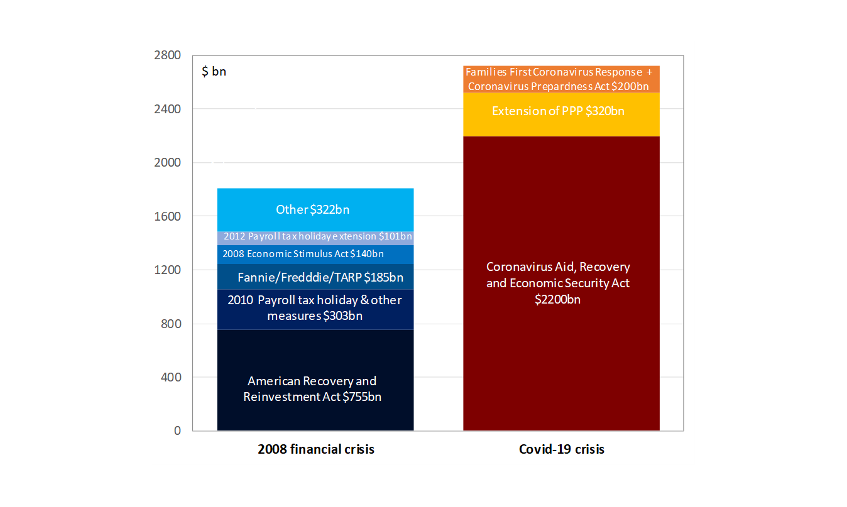 The coronavirus crisis has sent an unprecedented shockwave through the US labour market. Social distancing and other restrictions have paralysed many businesses, particularly in the service sector. Thus, the number of unemployment claims exploded between mid-March and the end of May 2020: 4 million on average per week, compared to around 220,000 in normal times. The rise in unemployment was very rapid, amounting in just two months to the equivalent of two years of job losses during the 2008-09 financial crisis.

The deterioration in the labour market required an urgent and forceful response from the US authorities. Especially given that household consumption remains the driving force behind the US economy and social safety nets are very minimal in the United States. For example, a significant difference between the US labour market and the European market is the lack of temporary job-retention schemes.

The impressive magnitude of the US package…

At the end of March, the US Congress adopted the Coronavirus Aid, Relief, and Economic Security Act (CARES), a vast economic assistance package of around USD 2.2 trillion, or 10% of GDP. This is the largest stimulus package in the history of the United States (see Chart 1). In addition, other support measures were introduced, totalling more than USD 2.7 trillion. During the 2008 financial crisis, fiscal measures amounted to USD 1.8 trillion, spread over 5 years. The magnitude is therefore greater today and the measures are concentrated on the last three quarters of 2020. The budget cost of these measures is estimated to exceed USD 2 trillion in 2020, excluding loan guarantees. 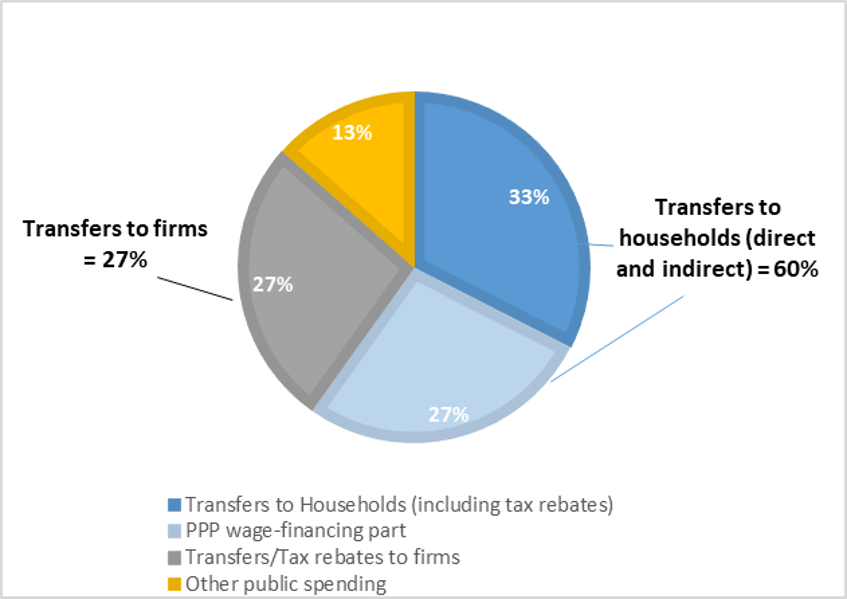 While the measures target the economy as a whole, they are particularly aimed at households (60%, see Chart 2). Of particular note is the massive increase in unemployment insurance, in terms of amounts, eligibility criteria and duration. For example, an unemployed person will receive an additional USD 600 per week for up to 4 months. Other measures include direct payments to households of USD 1200 per individual, the introduction of paid sick leave in case of Covid-19, tax breaks, etc.

Furthermore, some schemes for businesses also aim to support employment. For instance, the Paycheck Protection Programme (PPP) provides SMEs with state-guaranteed loans that can be written off provided that 75% of the funds are used to pay salaries. This programme was widely and rapidly subscribed to.

… should compensate for the short-term loss of income

Using the NiGEM model, we carry out simulations to assess the impact of support measures on the income of US households and, more generally, on gross domestic product (GDP), in a Covid-19 shock scenario based on a single wave of contamination but with prolonged economic effects.

The disposable income of US households is not expected to be adversely affected in 2020 compared to its pre-crisis trend, as the stimulus measures should fully offset the loss of income caused by the Covid-19 crisis (see Chart 3). Households should even enjoy purchasing power gains (Real Personal Disposable Income – RPDI) thanks to lower inflation (see Table 1). 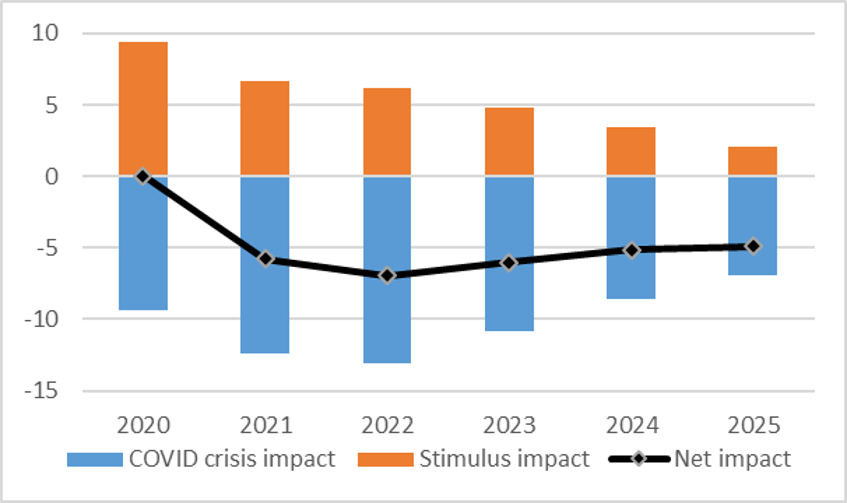 The increase in household disposable income in response to the different stimulus measures is already starting to be observed with a 13% increase in April compared to the previous month. This short-term rise is not surprising. It confirms the findings of recent microeconomic studies, such as Ganong et al, 2020, that estimate a median replacement rate of 134% for unemployment benefits, with two-thirds of eligible unemployed receiving benefits higher than their previous earnings.

In 2021, however, household disposable income is expected to contract compared to the pre-crisis trend, i.e. a negative shock of almost 3% on purchasing power, due to the relative persistence of unemployment and assuming that no new measures are taken.

Despite the relative stability of household income in 2020, it is not clear whether this replacement income will be fully spent, or even whether it will be spent in the same proportion as it was before the crisis. We assume that 40% of the additional income received by households would be consumed and the rest would be saved. All in all, the household savings rate is expected to average close to 20% in 2020, compared with an average of 8% in 2019.

This can be attributed to the high level of forced savings resulting from lockdown and changes in consumption habits; the savings rate reached a peak of 32% in April, after 8% in February and 13% in March. However, the households targeted by the stimulus payments mainly belong to the low-wage category, which traditionally have a higher propensity to consume and which, moreover, have benefited from a net increase in income (Muellbauer, 2020; Ganong et al., 2020). Furthermore, according to Karger and Rajan (2020), 48% of the cheques paid to households under the CARES Act were immediately consumed.

Overall, our results show that the stimulus should only partially absorb the shock to consumption and investment, thereby offsetting the loss of activity by 4.5 percentage points of GDP in 2020. Nevertheless, the US economy is expected to contract by between 6.5 and 8% in 2020 (according to our estimates as well as those of national and international institutions). The longer-term impact of these stimulus measures will depend on the consumption and savings behaviour of US households.

We analyse the sensitivity of our results to assumptions about the propensity of households to consume. With a lower marginal propensity to consume of 25%, similar to that observed during the recovery plans of 2001 and 2008 (Sham et al., 2010), the final gain in GDP would also be lower, i.e. around 3.4 percentage points.

The need for further stimulus measures is gradually becoming apparent

The measures were primarily taken by the US authorities in response to an emergency situation. Indeed, many of them are scheduled to end in July or at the end of the year. They are intended to temporarily make up for the lack of social safety nets and thus offset short-term income losses. However, they seem insufficient to allow the US economy to recover in the medium term, especially if the shock from the crisis proves to be relatively persistent. To this end, proposals have already been submitted to the US Congress on a new stimulus package to be adopted before the presidential election next November.