This Rue de la Banque, based on the exploitation of detailed data for the French manufacturing industry, argues that offshoring to low‑wage countries was a strong determinant of the labour‑market outcomes of low‑skilled workers in France during the period 1995‑2007. The results support the widespread view that international trade generates productivity gains, notably from having access  to cheaper inputs, but that these gains are not evenly distributed across the different economic players. Making the most out of globalisation therefore requires implementing effective policies, notably in terms of vocational training in order to accompany the transition to higher skilled jobs.

The consensus among economists is that trade generates welfare gains because it prompts a more efficient use of resources, increasing productivity and national income. The shared view is also that such gains are unevenly distributed across the different members of society, giving rise to both winners and losers from globalisation (Obstfeld, 2016; Carluccio, Ekeland and Guesnerie, 2017).

This Rue de la Banque presents a novel perspective on the relationship between offshoring and the demand for skills in the French manufacturing industry based on Carluccio, Cunat, Fadinger and Fons‑Rosen (2015).

Technical progress and globalisation increase the demand for skilled labour

Economists  have put forward two complementary explanations to account for the increase in the relative demand for skilled labour that has taken place in most developed economies over the past decades: technical progress and globalisation. According to the technical‑progress explanation, the revolution in information and communication technologies (ICT) has biased relative labour demand in favour of skilled workers. Computers and skilled workers complement each other, displacing unskilled workers. The globalisation argument is usually expressed in terms of the Heckscher‑Ohlin (HO) model. As a response to the integration of countries with abundant unskilled labour into world trade, in rich countries there is an expansion of skill‑intensive industries and a contraction in unskilled‑intensive industries.

Most economists have usually tilted towards the ICT explanation, partly due to the empirical shortcomings of the HO model: rather than a rise in the relative demand for skills via a change in industrial composition, we observe increases in the skill intensities of all industries across the board.

Recent data allow us to reconsider the role of international trade.

Micro‑level data, which are used to track the impact of international trade on individual firms and workers much more precisely, enable us to specify the effects of globalisation. Recent empirical papers have provided convincing evidence that import competition from low‑wage countries, in particular from China, has indeed had a large impact on labour demand in rich countries, mostly to the detriment of unskilled workers, while benefiting skilled ones (e.g., Autor et al., 2015). In the case of France, Carluccio, Fougère and Gautier (2015) find negative effects of offshoring decisions of French firms on the wages of production workers and Malgouyres (2016) shows that Chinese imports have depressed wages and created a polarisation of the labour market.

Our analysis is based on a detailed set of data on the trade activities of French manufacturing firms and the composition of the workforce that they employ in France.1  Using these data, Chart 1 shows the share of unskilled‑labour‑abundant countries in the imports of manufactured products (green line, left‑hand scale). The group of unskilled‑labour‑abundant countries includes those whose share of the population with secondary schooling is lower than in France,and those where the wages of unskilled workers are lower than in France.2

During the 1996‑2007 period,these countries accounted for an average of 19% of imports, climbing from 16% to 21% at the end of the period. The removal of trade barriers (notably the entry of China in the World Trade Organization – WTO), the advances in communication technologies, and the reduction in transport costs jointly contributed to this shift in the structure of French imports.3 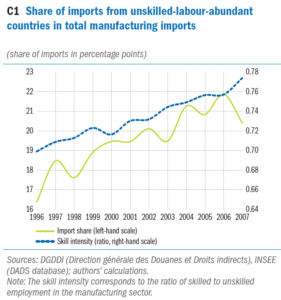 Chart 1 also shows the ratio of skilled to unskilled employment in French manufacturing industries, that we label “skill intensity”. This variable is defined as the ratio of non‑blue collar employment to blue collar employment.4 It increased  by seven percentage points over the period, with a yearly average of one percentage point (pp). The chart is consistent with the idea that, when firms import from unskilled‑labour‑abundant countries, they tend to change the composition of their labour force in France by employing relatively more skilled individuals. But it is necessary to have a closer look at the data in order to establish causality.

The trend in the skill intensity by firm varies according to the origin of their imports (or “import strategy”). Chart 2 plots the trend in the skill ratio in four groups of firms, broken down according to their import strategy. The chart shows that firms that import from unskilled‑labour‑abundant countries recorded higher levels of skill intensities than other firms, and that they upgraded their workforce much faster than the other firms. Conversely, the skill intensity of non‑importers and importers from skill‑abundant countries remained stable over the period (with the latter being lower throughout). Importantly, these trends are observed within industries.

We note that these results do not invalidate the ICT explanation, but suggest that trade is a complementary explanation to the trend in the skill intensity of manufacturing in rich countries. For a quantitative comparison of the impact of trade and technology in the case of the United States, see Autor et al. (2015). 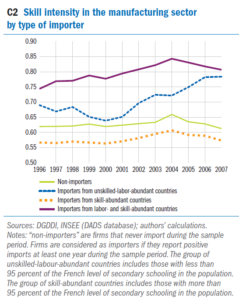 The stylised facts outlined above, and the evidence discussed below, suggest that trade and skill demand are related. Carluccio, Cunat, Fadinger and Fons‑Rosen (2016) develop a theoretical model that generates such a link. The basic idea is the following. In the global economy, countries specialise according to their comparative advantage,i.e. the products they can produce at lower costs. Unskilled‑labour‑abundant countries like China specialise in producing and exporting unskilled‑labour‑intensive products. Skill‑abundant countries like the United States or France specialise in the production of relatively skill‑intensive products. In the globalised economy, firms have the possibility of transferring parts of the production process to different locations, taking advantage of the differences in costs across countries, importing inputs from the cheapest locations around the world. Firms that import unskilled‑labour‑intensive goods choose to do so from unskilled‑labour‑abundant countries and stop producing these goods themselves. By dropping the least skill‑intensive products, firms concentrate on the most skill‑intensive parts of the production process, and hence employ more skilled individuals. By the same token, firms importing from skill‑abundant countries tend to import goods whose production requires relatively skilled individuals. Importing these goods implies that they are no longer produced in‑house. Thus,firms importing from skill‑abundant countries reorganise their production processes to employ less skilled individuals. These mechanisms can explain the patterns revealed in Charts 1 and 2.

In the data, imports are concentrated  on a few firms: not all firms import, in spite of the efficiency gains that it entails. The reason is that importing is a costly activity: firms spend time and resources in identifying the right partner in the foreign location; they have to learn about local regulations and business  practices; they incur the costs of writing up complicated  international contracts. The presence of these costs implies that, even when offshoring can reduce production costs and increase profits, not all firms do it because some of them cannot afford it. In fact, within each particular industry, only firms that are large enough can enter import markets – a process of self‑selection takes place.

The empirical evidence suggests that globalisation affects the income distribution in industrialised countries, at least as far as the manufacturing industry is concerned. The productivity gains from having access to cheaper inputs through offshoring are not distributed equally across different economic players in our rich societies. In a world with slow growth, countries need to continue to seek ways of maximising the gains from trade, while ensuring that they accrue to all workers. Making the most of globalisation therefore implies implementing policies that correct for the unequal effects of trade, by developing effective redistribution policies, as well as by providing training for workers to accompany them in the transition to better jobs.

Carluccio (J.), Ekeland (I.) and Guesnerie (R.) (2017) “Fragmentation and wage inequality: insights from a simple model”, Annals of Economics and Statistics, Special issue in the Honor of E. Malinvaud, No. 125/126, June.