The European Commission presents today the 2019 country-specific recommendations (CSRs), giving economic policy guidance to all EU Member States for the next 12 to 18 months. The Commission also recommends closing the Excessive Deficit Procedure for Spain and adopts a number of documents under the Stability and Growth Pact.

The European economy is growing for the seventh consecutive year and is set to continue expanding in 2020, with all Member States’ economies growing despite less favourable conditions and global uncertainties. The number of people in employment is at a record high and unemployment at a record low. At the same time, there are still significant differences between countries, regions and population groups. Against this backdrop, the Commission calls on Member States to build on the progress made in recent years. Effective reforms, accompanied by well-targeted investment strategies and responsible fiscal policies, continue to provide a successful compass for modernising the European economy. 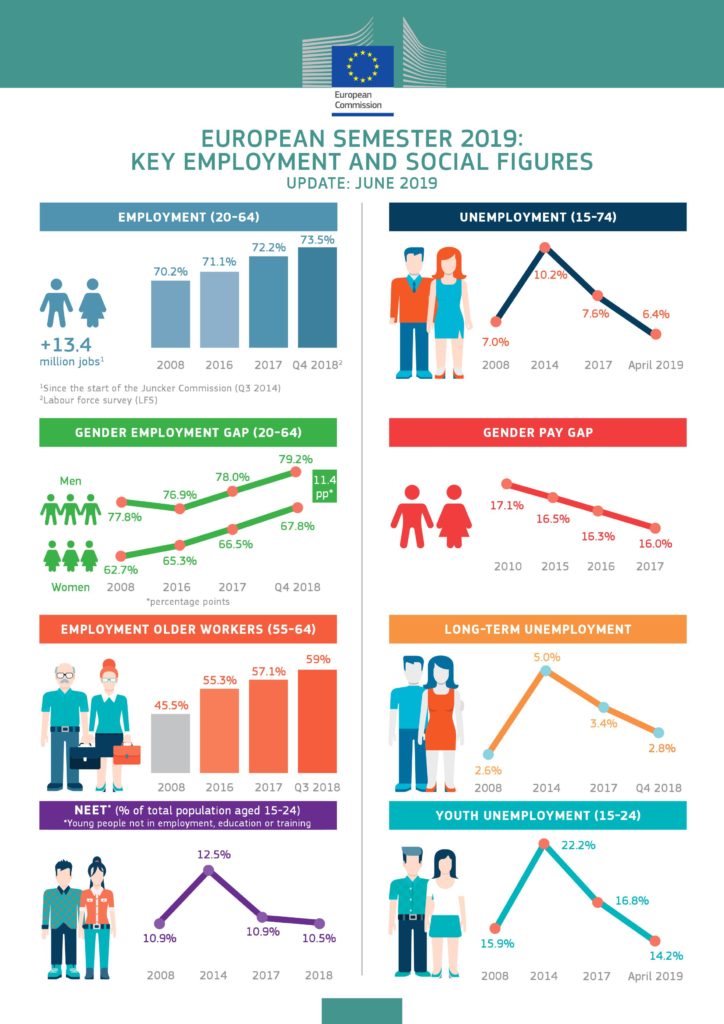 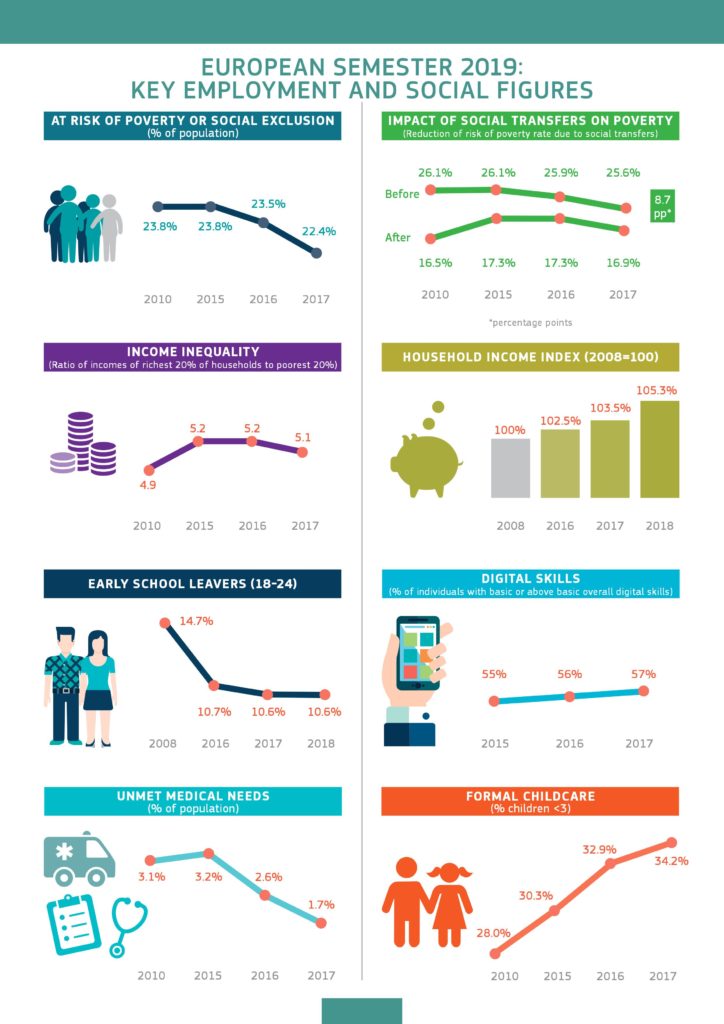 Valdis Dombrovskis, Vice-President for the Euro and Social Dialogue, also in charge of Financial Stability, Financial Services and Capital Markets Union, said: “The European Semester has made a real contribution to improving the economic and social situation in Europe. Yet, some important challenges remain, and now risks to the economic outlook are growing. It is worrying to see reform momentum weakening in some countries. We call on all Member States to put new energy into making our economies more resilient and into supporting growth that is both sustainable and inclusive. Better targeted investment can make a significant contribution to achieving these objectives.”

Marianne Thyssen, Commissioner for Employment, Social Affairs, Skills and Labour Mobility, said: “This Commission has worked hard to build a fairer Europe, a sustainable and inclusive Europe, a Europe that leaves no one behind. The European Pillar of Social Rights establishes principles and rights for all EU citizens. This has to be implemented at national level. With the world of work changing fast, it is essential that Member States follow up with reforms in initial education and lifelong learning, labour markets and social protection.”

Pierre Moscovici, Commissioner for Economic and Financial Affairs, Taxation and Customs, said: “With this last spring package of our mandate, we reaffirm our commitment to an intelligent application of the Stability and Growth Pact. That means basing our decisions not on a mechanistic or legalistic application of the rules, but on whether they are good for growth, jobs and sound public finances. Our track record shows that this is the right approach: public finances have been improving steadily without undermining growth. We also stress today the need for a number of Member States to pursue and where necessary step up efforts to tackle aggressive tax planning, in the interests of fairness to all taxpayers.”

The 2019 country-specific recommendations
Today’s recommendations give guidance to Member States to respond adequately to persisting and new economic and social challenges and to deliver on their shared key policy objectives. The content of the recommendations reflects the overall priorities set out in the Annual Growth Survey 2019 and the 2019 recommendation on the economic policy for the euro area issued in November. They draw on the detailed analysis of the country reports published in February and the assessment of the national programmes presented in April. The slowdown in global growth reinforces the need to pursue structural reforms, prioritising those aimed at sustainable and inclusive growth. Member States should advance social convergence in line with the European Pillar of Social Rights. In line with the euro area recommendation, Member States should also proceed towards a more symmetric rebalancing across the euro area and continue their efforts to strengthen the Single Market and deepen Europe’s Economic and Monetary Union.

The country-specific recommendations for 2019 include a stronger focus on identifying and prioritising investment needs at national level and pay special attention to regional and territorial disparities. This is in line with the thorough analysis of investment needs and bottlenecks identified for each Member State in the country reports published earlier this year and should serve to prioritise the use of EU funds in the next long-term EU budget, or multiannual financial framework 2021-2027.

Most progress has been achieved in financial services and employment policies, whereas recommendations to broaden the tax base, in healthcare, and competition in services, show a particularly low implementation rate.

In view of the remaining economic and social challenges and downside risks to the economic outlook, stronger reform implementation across the board is crucial to strengthen the resilience of the EU economies.

In February, the Commission concluded that 13 Member States were experiencing imbalances (Bulgaria, Croatia, France, Germany, Ireland, Portugal, Spain, the Netherlands, Romania, and Sweden) and that three countries of these were experiencing excessive imbalances (Cyprus, Greece, and Italy). As in previous years, these imbalances require continued specific monitoring under the Macroeconomic Imbalances Procedure (MIP).

Guidance and decisions under the Stability and Growth Pact
Based on the assessment of the 2019 Stability and Convergence Programmes, the Commission has taken a number of steps under the Stability and Growth Pact. The Commission recommends that the Excessive Deficit Procedure (EDP) be abrogated for Spain. Once the Council takes this decision, all the excessive deficit procedures dating from the crisis will be closed. In 2011, 24 Member States were in the corrective arm of the Pact.

The Commission also adopted reports for Belgium, France, Italy and Cyprus under Article 126(3) of the Treaty on the Functioning of the EU (TFEU), in which it reviews their compliance with the deficit and debt criteria of the Treaty. For Italy, the report concludes that a debt-based EDP is warranted.

The Commission also adopted today the third report for Greece under the Enhanced Surveillance framework that was put in place following the conclusion of the European Stability Mechanism stability support programme. The report notes that Greece has made a reasonable start to the post programme environment since August 2018, but finds that reform implementation in Greece has slowed in recent months, and that the consistency of some measures with commitments given to European partners is not assured and poses risks to the achievement of agreed fiscal targets.

Background
The country-specific recommendations build on the wider priorities outlined in the President’s State of the Union address and the Annual Growth Survey. They are revised every year to reflect the progress made and the changing environment. Euro area Member States also receive recommendations on the economic policy of the euro area. The recommendations under the European Semester are coherent with the longer-term vision of the Europe 2020 strategy.

Since taking office, this Commission has implemented a number of changes to the European Semester, to make it more effective and relevant. For instance, the number of recommendations has been reduced and their content has been made sharper, while leaving room for Member States to act in line with their national practices and situations. Greater focus has been put on the challenges arising from the aggregate situation of the euro area, including possible spill-overs between national situations. The euro area recommendation has been presented earlier in the cycle (in November), to allow Member States to consider the euro area perspective in their plans. Social considerations have been prioritised and mainstreamed in all steps of the assessment, in line with the priorities of the European Pillar of Social Rights and through the use of the Social Scoreboard. Moreover, in this year’s cycle, the Commission has zoomed in on the investment needs of each Member State, as a way to prepare for the programming of the future generation of EU funds and to make sure that reform and investment priorities are well aligned at national level, so that EU support can be best used.

In addition, the Commission has taken several initiatives to promote dialogue, reach out to stakeholders and increase national ownership of reforms. It has consulted with Member States on the analytical parts of their country reports prior to the publication. In the past months, the Commission met with national authorities and stakeholders to address key challenges and verify how these could translate into country-specific recommendations. In parallel, the Commission holds regular consultations with social partners and has invited Member States to be more receptive to national social partners’ contributions. The Commission‘s Structural Reform Support Service also provides targeted reform assistance to Member States, at their request, to support them in design and implementation of reforms.

In February, the Commission presented its detailed analysis of the economic and social situation of each Member State, in the form of country reports, as part of the European Semester Winter Package 2019.

Today’s recommendations are based on these dialogues, the national programmes, data by Eurostat and the recently published Commission 2019 Spring Economic Forecast.