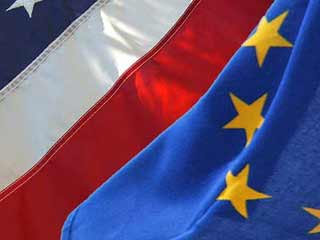 The EACC in the Media

◊◊ EACC is telling the Story of Europe
[Finland in the U.S. Newsletter – August 2013] EACCNY’s Executive Director Yvonne Bendinger-Rothschild was interviewed for the Newsletter of the Finnish Consulate General. Continue reading.

◊◊ EACCNY board member Yann Coatanlem participated at “500 Millions d’Européens” weekly radio show at the French radio station BFM Business
[March 29, 2014] — EACCNY board member Yann Coatanlem, President of Club Praxis, participated in a conversation organized by the French radio station BFM Business, based in Ile-de-France, which focuses on economic matters for the 500 Million Europeans program.
Also part of the discussion about the transatlantic relationship were Vivien Pertusot, Director of the French Institute of International Relations, and Thomas Jenkins, Senior Adviser to the General Secretary of the European Trade Union Confederation.
“500 Millions d’Européens”, a weekly show hosted by Yann Antony Noghès, deals with European issues, bringing together experts and current actors to discuss pressing topics. Listen to the podcast here.

◊◊ ECB Stimulus: A Bold Move or Baby Step?
[Jun 24, 2014] EACCNY’s Executive Director was interviewed by Knowledge@Wharton, the business journal of the Wharton School at the University of Pennsylvania and commented on the latest ECB Stimulus. Read the full story here.

◊◊ Debate: Is TTIP Good for Europe?
[Summer, 2014] EACCNY’s Executive Director was asked to participate in a debate organised by Munich based ‘Business Spotlight’ (published by Spotlight Verlag GmbH, part of the Holtzbrinck Group) addressing the question if the Transatlantic Trade & Investment Partnership (TTIP) will be beneficial for Europe. Read the article here.

◊◊ EACC New York Executive Director interviewed by Khabar, the National News Agency of Kazakhstan
[August 28, 2015] Yvonne Bendinger-Rothschild was interviewed by Maira Kabieva of the Khabar National News Agency of Kazakhstan. The discussion evolved around the dramatic drop in the Chinese stock markets and its effect on the world economy. The interview aired on September 7th, 2015.

◊◊ EACCNY on EuroNews on State of Brexit Negotiations on the Impact of the Midterm Elections on the Relationship between Europe and the US.
The trade talks with the European Union on the “removal of barriers to trade” will resume after the US midterm elections in late November. Then there should be a plan for “finalizing results in a number of areas”. One reason for the economy to follow these elections closely. More here.

The European Union in the Media

United Europe — The European Union has 28 member states, 17 of which are on the common currency.
Founded through a string of treaties beginning in the 1950s, the EU has developed its own economic, political and legal policies. Taken as a whole, the EU is the world’s largest economy. Below is a section of news outlets: