It is truly a global crisis. Old animosities and hostilities should be put aside to deal with this pandemic. A coordinated effort by the US and China marshal the resources to combat the virus and help the world economy recover from this body blow. Countless op-ed pieces in the traditional media and internet have cried, “Can’t we just get along, for the common good?”. And who can disagree?

The problem is two-fold. It is naive and dangerous. It is naive because without being an existential threat to either the US or China, there is little incentive to “bury the hatchet.”  It is dangerous because it pretends that the constant pursuit of contingent goals in the pursuit of national interest can be suspended.

Polemicists often make mountains out of molehills.   If this or that is not done, the system will collapse.  Every problem or crisis is defined as existential in nature.  Such a threat is supposed to cast aside objections and surmount resistance. A decade ago, some argued that without a common bond, the European project would flounder. Some of the same people are making the same claims now.  They cry wolf.

This is serious, but it is not an existential crisis for the international order, as it were.  At least, at this point in time, it does not look to be, even if the economic hit is significant and different intensities and policy responses make for a variety of outcomes and timeframes.  And to be sure the economic shock will be severe, and, frankly, much hardship still lies ahead.  Nevertheless, whether it is in one month or three months or six, the old issues of trade, intellectual property rights, open seas, human rights,  and the disparity of wealth and power will re-emerge.  North Korean and Iranian threats have not disappeared.

In Europe, the creditor nations recognize the lack of moral hazard now, but the past problems (e.g., debt levels, banking systems, slow growth) have not been satisfactorily addressed.  They know that these issues will also become more salient in the period just down the pike.  It is precisely because this is not an existential crisis that these things matter.

This is not to suggest that things snap back to the status quo ante.  There is likely to be a change in social behavior for some time, and many countries will upgrade their medical infrastructure.  The crisis may also accelerate forces that were already evident, like reducing supply chains, re-considering Chinese operations,  economic nationalism, and what we have called the “end of economic primacy.”  Still, the contours of global power have not been upended.  Rather than signal a significant watershed or turning point, it seems more likely,  that the crisis will intensive and accelerate existing trends and more deeply entrench power relationships.

Outside of some off-the-charts jobless benefits or welfare applications, economic data has generally been ignored by investors, and for good reason.  There is little doubt about the direction of economic activity.  Most of the high-frequency economic data is not a first or even second-order issue. The data is reported at lags, while in some ways, the crisis has accelerated time.  The fast-moving events make the previous period’s data less relevant.

Within that context, data from China and the US, the world’s two largest economies, in the coming days may draw more attention. That said, China’s response to the coronavirus has not bolstered confidence in data coming from Beijing. Nevertheless, two reports may provide some insight.

The first is China’s trade data. It is the first large country to report March figures. Exports are expected to have fallen by about 15% year-over-year, while imports may have been reduced by 10%.  Depending on how the new year falls, China often reports a large decline in the trade balance in February or March. The median forecast in the Bloomberg survey is for the trade balance to fall to $19.4 bln. It averaged $31.5 bln in 2019 but fell to $3 bln in February.  While it may be buried under several other issues, for the time being,  China’s ability to fulfill the trade agreement with the US will likely percolate toward the top again.

The second is China’s Q1 GDP.  The economy had expanded by 1.5% in Q4 quarter-over-quarter for a year-over-year rate of 6%. The median forecast in the Bloomberg surveys a quarterly decline of nearly 10% and a year-over-year contraction of 6%. First-mover may have some advantages for selling books on the internet, but not for emerging from the health crisis. If it is the factory of the world, its customers are in lockdown to various degrees. Moreover, on the other side, the supply chains by shortened and alternatives to China will likely accelerate. Japan earmarked funds to be used to help Japanese companies leave China. Europe recognizes the need to re-onshore the parts of the medical infrastructure that had been outsourced to China.

Before the weekend, China reported a surge in lending in March. Aggregate social financing, which includes both the formal banking system and shadow-banking (non-bank financial institutions), jumped by CNY5.15 trillion (~$732 bln).  This time series is short (~ three years), but it could be a record increase.  It also may have been flattered by some activity in February that missed the data collection cut-off.  Banks accounted for about 55% or CNY2.85 trillion.  In addition to the dramatic rise in lending, Chinese corporations issued around CNY1 trillion bonds, and the government sold roughly CNY635 bln in bonds as well.

China’s policy response is not over. News that price pressures are subsiding (March CPI 4.3% year-over-year after 5.2% in February and at 1.2% core inflation is near the lowest level since 2011). More rate cuts are likely, including the Loan Prime Rate, which was inexplicable unchanged in March at 4.05%. When it is set on April 20, a 20 bp cut is expected.  Talk of a significant fiscal effort continues to swirl. Officials appear to be assessing the magnitude of the damage as the economy re-starts.  The reformist wing of the Chinese Communist Party wants to take advantage of the situation to re-structure and liberalize (i.e. more rather than less market) when and where possible.

The US reports some March consumption (retail sales) and production (industrial output) figures.  These give a taste of things to come. Retail sales are expected to have dropped by around 7%.  Investors already know auto sales fell sharply, but the shutdown of the economy gathered momentum as the month progressed. There may be some interest in the shift of sales from restaurants to grocery stores and at the general merchandise.  Gasoline sales plummeted, while online sales likely surged.  The retail sales report picks up a little more than 40% of consumption, and the overall point is that consumption will take a real hit.  So will income.

The median forecast in the Bloomberg survey a 4% decline in industrial output.  It includes factories, mining/drilling, and utilities.  US industrial output fell in four of the last six months of 2019 and declined in January 2020.  It is essentially flat on the year going into March.  Over the past six months through February, manufacturing output has slipped a little.

Separately, the regional Fed manufacturing surveys for April kick-off with the NY (Empire State) and Philadelphia surveys.  The weakness seen in March is accelerating in April.  The Fed’s Beige Book is rarely a page-turner, but the anecdotal survey from around the region may be of greater interest than usual.  The virus has hit different areas at different times and intensity.  Policy responses have varied.

The Federal Reserve’s commercial paper facility is scheduled to be launched on April 14. The commercial paper facility is one of several (9) of its kind the Fed has established. They are special-purpose-vehicles (financial jargon for a special type of arm-length entity that can do what the Fed cannot), and it is backed by the US Treasury funding, for which the recent spending bill earmarked $454 bln. The funding is to absorb any losses from the operations.

While the huge premium for dollars in the cross-currency swaps has gone away and now they trade at a substantial discount. However, there still is something broken. The Bloomberg chart here illustrates the issue. It showed that LIBOR (white line) tracked the OIS (overnight index swaps). The crisis hit. The Fed cut rates aggressively, but the LIBOR remains elevated.  LIBOR eased following the Fed’s announcement of new lending facilities on April 9. The nine basis point decline was the largest in a month. Commercial paper rates are also elevated. The launching of the Fed’s commercial paper facility is expected to ease pressure here,  but the problem may be bigger. Euribor has also been rising sharply. Since the middle of March, three-month Euribor has risen from almost minus 50 bp to minus 25 bp now. 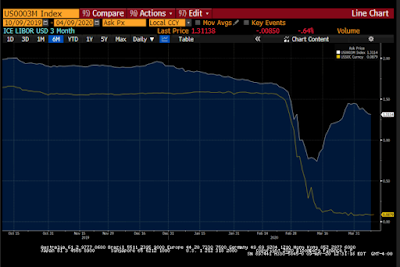 At the same time, the stabilization of risk-appetites may have also led to a reduction of US dollar demand stemming from the unwinding of structured trades. Europe’s Dow Jones Stoxx 600 bottomed on March 16, the MSCI Emerging Market Index’s low was set on March 19. The nadir for the S&P 500 was March 23, the same day (so far) that the low for the euro was recorded.

Compliments of Bannockburn Global Forex – a member of the EACCNY.