The UK has a new Prime Minister who shares this supremacy and arrogant ideology,  inheriting the difficult task of realizing (some form of) Brexit. Who is he? Alexander Boris de Pfeffel Johnson, born in New York City’s Upper East Side, is an Oxfordian aristocrat, a political journalist turned politician. A hard-core politician who pretends to represent the people against politicians.

He is probably one of the last believers in the old Imperial view of the United Kingdom. He thinks that the country will be stronger by being isolated from Europe and has a bright economic future without its membership. It is the idea that sovereign strength requires isolation from the world.

His real challenge is to keep the United Kingdom intact. There is the secession rhetoric of Scotland (that voted against Brexit), the opposition of Ireland (Northern Ireland voted against Brexit), while the Welsh Assembly is in favor of a second Brexit referendum. It separates England from the rest of the UK. Will the Kingdom remain united?

An English Baron trying to ignore the Irish geography and political diversity. 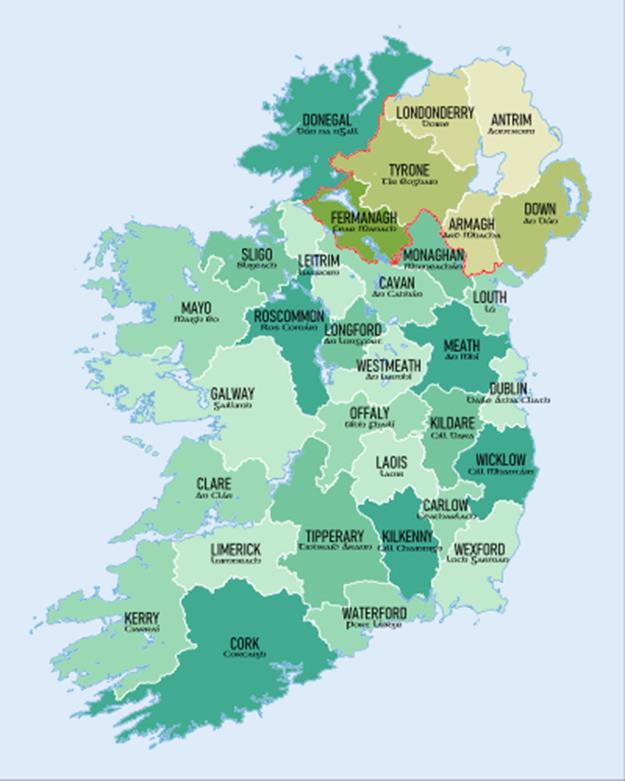 As it happens with conflicts, a small area (inhabited by a few people) can suddenly become important. Ireland is split between Northern Ireland that is part of the UK, and the Irish Republic that is its own country and will continue to be part of the EU after Brexit. Out of 67 million UK citizens, 1.8 million live in Northern Ireland. Half of them are catholic and naturally willing to join the Republic of Ireland after Brexit (and thereby leave the UK). If that happens, Boris Johnson’s legacy as Prime Minister is defined by the shrinking of the UK – which he probably realizes and fears.

His last move consists in blaming the EU for the fact that the two parts of Ireland are split. The internal Irish border (between the Republic and the UK’s Northern Ireland) will suffer from a no-deal as it implies zero arrangements for the continuation of trade and customs. Currently trade in goods and services is with few restrictions within Ireland. This stops overnight when the UK leaves the EU without a deal: the two parts of Ireland could be in different customs and regulatory regimes.

The existing UK-EU withdrawal deal therefore includes a Backstop, an ‘insurance’ in case no agreement is made on Ireland’s internal border after post-Brexit negotiation period. This Backstop would keep Northern Ireland aligned to some EU single market rules, to prevent internal disruption in Ireland when UK-EU negotiations fail. It would not affect the people.

Boris Johnson found the Backstop “anti-democratic”: this scenario would effectively keep a part of the UK within the single market. Johnson will be negotiating for a version of the withdrawal agreement without the Backstop. The dismissal of the Backstop immediately provoked a clash with Ireland. The contradiction is obvious. Boris Johnson wants a no-deal that would have the effect to create a solid border between the two Irelands.

I cry for you Oh! Britannia

The British system is sometimes surprising, and not exemplary. Boris Johnson became Prime Minister based on 92,153 votes from one political party (the Conservatives or Tories). That happened just a few weeks after the European Parliament Election where his conservative party royally (!) obtained 8.8% of the UK public’s votes.

Can his government obtain the confidence of the House of Commons? Probably not after the House rejected all of the eight possible iterations of Brexit. Boris Johnson saw his majority diminish to one vote: the winners are the LibDems who want to remain in the European Union.  Should we expect a general election? Or a new referendum?

The future of Boris Johnson as Prime Minister is all but certain: for all his obscenities, he might be the most ephemeris leader of the cabinet. He could not care less about the country. It’s all about him.

All this should not matter if the future of the British people and their livelihood was not threatened. The UK political system is inadequate to make decisions, to address its national social-economic inequalities and empty promises from politicians – that wouldn’t be solved a single bit by leaving the EU.

Boris Johnson has treated Europe in such a despicable way that, except in some business circles, EU citizens have little regret to see the UK leaving. The admiration for Britain has been badly damaged by the Brexit negotiations and the recent bullying of the PM. All they want is for this sordid saga to end up as quickly as possible. The long=term consequences of this breach in trust by the UK are already being felt and will amplify as we get closer to October 31.

A no-deal is good for no one. Besides the obvious negative impact on the Pound Sterling, it is the provision of food, beverage, drugs and many other goods of prime necessity that would suffer. About 80% of the visitors in the UK are from the EU. Brexit uncertainties leave consumers gloomy about the future direction of the economy.

The logistical nightmare could translate into tens of kilometers of trucks subject to non-EU formalities. The smiles of the US administration may be inviting and result a new trade deal, but it does not change the fact that the EU is only 21 miles from the UK.

Yet, no-deal is the most likely scenario. If Boris Johnson believes he can bully the EU into compromise, he has not understood that the EU has done as much as her own structure and rules allowed it to do. For a former Foreign Minister, it seems strange.

Under former Prime Minister Theresa May’s deal – which was voted down three times by Parliament – the UK would have entered a 21-month transition period. I would have offered some breathing space, namely, to find a practical solution to the Irish deadlock.

Instead, a court will begin on September 6 and decide whether Boris Johnson can suspend parliament to force through a no-deal Brexit just days before an expected showdown with MPs on September 9. Pulling out of EU meetings, as announced by Boris Johnson,  is a reckless PR stunt that will backfire on Britain.

As to an alliance between the Labour Party and the Lib Dems, it could lead to either a second referendum of a decision to remain in the EU.

We are not at the end of the Eurotunnel, by a wide margin. And a constitutional crisis is not far away for the (Un)ited Kingdom.

Compliments of Galileo Global Advisors, a member of the EACCNY. This article originally appeared at Medium.