Due to the recent strength of the cash markets, CMBS trading desks posted heavy activity in the past week with bid list volume topping $800 million between Monday and Thursday. Overall, the cash sector continued to see modest spread tightening, decent two-way trading, as well as strong representation from SASB and conduit paper. Tight AAA pricing on new issues and concerns over future supply wind-down enabled cash spreads to grind tighter by an additional five to 15 basis points, on the week.

The CMBX indexes, on the other hand, underperformed the cash segments thanks to some sizable widening up and down the capital stack. From a weekly perspective, CMBX 6/7/8/9/10 AAA spreads came out by one to three basis points while BBB- spreads at the lower end of the credit curve widened between 13 and 16 basis points for series 7-10. The biggest spread blowout for the week, however, came from CMBX 6 where spreads moved out by roughly 26 basis points – the widening may have resulted from the release of weak retail earnings coupled with the market reaction to news surrounding Sears/Kmart closures.

According to a preliminary review conducted by Commercial Mortgage Alert regarding upcoming deals in the CMBS pipeline, total issuance in 2017 is projected to reach up to $100 billion as activity surges in the last quarter. Driven by spread compression amid the recent CMBS rally, many issuers are rushing to clear their loan inventories prior to year-end in order to ride on the momentum of the present, favorable pricing environment. 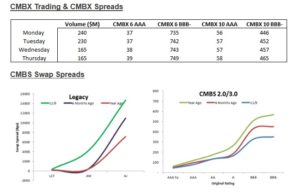 Top Credit Stories from the Week

Macy’s to Close Store Behind CMBX 7 Loan (MSBAM 2013-C13) – According to the The Los Angeles Times, Macy’s will be closing two more California locations in the coming months, including one that serves as collateral for a CMBX 7 loan.

Target to Close Four Locations That Serve as Shadow Anchor to CMBS Collateral (WBCMT 2007-C3) – According to the Minneapolis Star Tribune, department store chain Target will close 12 underperforming US stores in February 2018. Four of these locations slated to close are shadow anchors for retail properties that back CMBS loans.

Times Square Hotel Loan Lands $57M Refi (WFRBS 2014-LC14) – According to The Real Deal, developer Tishman Realty has scored a $57 million loan to refinance the Westin Hotel in Times Square, New York. The loan will retire the $55 million Westin New York at Times Square – Leased Fee note, which matures in February 2019 and is locked out until November 2018.

Compliments of Trepp, LLC,  a member of the EACCNY