On December 20, 2017, Congressional Republicans passed their long-awaited plan to restructure the tax code, and President Trump signed the bill into law on December 22. Originally titled the Tax Cuts and Jobs Act, last-minute Senate budgetary rules prohibited a short name, resulting in the longer name, H.R. 1, An Act to Provide for Reconciliation Pursuant to Titles II and V of the Concurrent Resolution on the Budget for Fiscal Year 2018 (“HR 1” or “the Act”).[1]

The Act rewrites tax policy for the first time since the Reagan administration. While initial capital market reactions are almost universally positive, it will take time for businesses, investors, lenders, and other constituents to fully absorb the changes and react.

Now what? HR 1 is the new normal, and accordingly we have been digesting and analyzing the Act, and retooling our models to reflect the valuation impact of the Act. We broadly summarize the final provisions of the Act as they pertain to taxable entities, outline model and value drivers, and highlight certain unknowns. 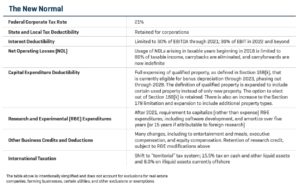 How Does the Act Affect Valuations?

The value of a business enterprise depends primarily on its capacity to generate after-tax earnings and cash flows, as measured either discretely in an income approach or implicitly through a market approach. To a degree, the impact of the Act has been reflected in the stock prices of publicly traded companies since at least December 20, 2017, though one could argue the market has (at least partially) anticipated tax reform since the November 2016 election. Still, the valuation impact from tax reform will only be reflected in whole once companies and capital market constituents fully digest the Act, and the corresponding facts and circumstances of each company become clearer. Importantly, analyzing market multiples for public companies or deal multiples implied by merger and acquisition transactions will require additional care in the coming months and years as the benefits (or detriments) from the Act may differ widely for each company, even those operating in the same industry.

From an Income Approach perspective, there are two principal challenges to consider:

Other value drivers that should become clearer as 2018 unfolds include:

As we gain clarity on the above (both from a market-oriented and company-specific perspective), and after adjusting tax rates to reflect HR 1, our attention shifts to a company’s cost of capital. The required return on equity typically requires estimates of the equity risk premium, beta, and size premiums. Because the underlying data driving these inputs tend to be historically derived, we may have a mismatch between tax laws in effect during the lookback period relative to future expectations. That said, with the exception of beta, the lookback periods are very long and capture many different tax policies.

The relationship between the tax deductibility of interest expense and an assumed capital structure in the weighted average cost of capital (WACC) poses a further challenge due to HR 1’s limitations on interest deductibility, both to the beta releveraging process and to the after-tax cost of debt. At a high level, it is necessary to derive an effective tax rate attributable to the interest tax shield. One way to address this issue is to perform the following three steps:

As a final thought, with a $1.5 trillion price tag according to the Joint Committee on Taxation, the long-term growth rate warrants additional consideration now that the Act is law. One argument suggests that HR 1 may result in enhanced economic growth resulting from unleashing new foreign and domestic capital and rising wages. Another argument suggests the increased debt load on the U.S. economy may dampen gross domestic product growth. We will closely monitor market signals and economic forecasts as the current uncertainty is clarified.

Significant tax reform brings opportunities and challenges. Most important, there is no one-size-fits-all answer to the effects of a 40% decrease to the maximum federal corporate rate coupled with major changes to other provisions of the tax code.

1 Full text is accessible at H.R.1 – An Act to Provide for Reconciliation Pursuant to Titles II and V of the Concurrent Resolution on the Budget for Fiscal Year 2018.

Compliments of STOUT, a member of the EACCNY