It was an eventful weekend in the world of politics with both Germany and New Zealand holding elections, British Prime Minister Theresa May outlining her latest Brexit implementation plan, and Japanese PM Abe hinting at holding snap elections later this year.  Let’s briefly cover each.

Angela Merkel won a fourth term in the German election but her party performed more poorly than expected, winning a declining share of seats.  Both the far left and far right wing parties performed well and which route Merkel goes in terms of forming a coalition remains unknown.  This uncertainty could push the EUR lower in the near term, especially since it is arguable that the EUR is overbought given its rise from 1.04 to over 1.20 just this calendar year.  In fact, the price action late last week (post FOMC, see below) and into today suggests such an overbought scenario.  Pay attention to the 50-day moving average of 1.1828 which, if breeched, opens a technical move lower to 1.1530.

I typically don’t give much airtime to New Zealand, so let’s give the kiwis a little bit of love here.  The incumbent Nationalist Party won 46% of the vote over the weekend, well ahead of the challenge from the Labour Party at nearly 36%, but neither won enough seats to govern alone.  Thus, it could be weeks before a coalition government is formed.  The NZD fell on the news but stabilized in NY hours, and is down just 0.6% from Friday’s close.

In Japan, PM Abe could call for snap elections as early as next month, which is nearly a full year before the next general election is scheduled.  Earlier this summer Abe’s Liberal Democratic Party had suffered a monumental defeat, winning only 23 parliamentary seats versus 57 it had held prior.  Many attributed this to a favoritism scandal that had rocked his administration and his support subsequently fell below 30%.  However, that number has now eclipsed 50% – a shocking turnaround attributed primarily due to his handling of the situation in North Korea; nothing like a crazy man in your neck of the woods to make you look good by comparison.  The impact of Abe’s up-and-down-and-up-again support on the JPY has been largely muted.  Instead, this pair has taken its direction more from geopolitics in general as well as the market’s view of interest rate differentials between Japan and the U.S.

I said above that I wouldn’t talk U.S. politics, and I (mostly) meant it.  That said, two items have been and remain noteworthy, namely healthcare reform and tax reform.  It seems that House Republicans will make yet another attempt at a repeal/replacement of the Affordable Care Act potentially as early as this week, but tax reform is likely a 2018 event.  In terms of dollar impact, my take is that the market is skeptical of anything real getting accomplished and thus actual progress could be construed as dollar positive: the bar has been sufficiently lowered that even a modest upside surprise could have meaningful impact.  Time will tell.

Moving away from politics, last week’s FOMC meeting gave renewed optimism to dollar bulls, as Ms. Yellen hinted that a December rate hike is still on the table and that balance sheet reduction will commence in October.  Probability of a quarter-point hike at its December 13th meeting now sits at nearly 60% up from only 34% as of Sept 1st (source: Bloomberg).  The USD, which has been in a yearlong decline, reacted favorably to the news and has parlayed those gains as we begin a new week.  That said, the dollar index remains in a downward draft, as evidenced by the below chart: 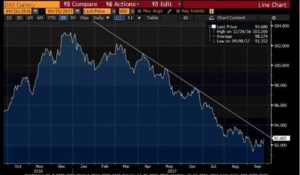 A few comments on select currency pairs of note:

* EUR/USD failed in its attempt to breach 1.2100 and has settled back below 1.1850.  The above-mentioned political situation in Germany isn’t helping.  Watch later this week for Spanish and German inflation releases on Thursday and Eurozone core CPI Friday, which is expected to come in at 1.2%.

* USD/CAD troughed at 1.2062 but has recovered the 1.2300 handle.  The oil correlation remains somewhat weak as WTI Crude now trades about $52 per barrel but the loonie has been unable to garner any meaningful additive strength from that move up.

* GBP/USD – I already mentioned Theresa May’s Brexit comments.  Moreover, Moody’s downgraded UK’s sovereign rating last week.  That said, this downgrade simply brought Moody’s rating in line with those at Fitch and S&P; thus, the impact on the GBP was muted.  In fact, GBPUSD had moved from 1.2900 to 1.3650 just this month, and even with the Brexit talk and rating downgrade, sterling has held the majority of those gains, evidence of the underlying support the GBP currently enjoys.

* USDJPY – since bottoming at 107.32 on the North Korea threat September 8th, the USD has rebounded sharply.  Interest rate differentials (favoring the USD) and geopolitical turmoil (typically favoring the safe-haven yen) remain the primary conflicting forces in this pair.

Other market factors: the long-term effects of Hurricanes Harvey, Irma and Maria will be felt for quite some time, but the short-term impact on the markets seems to have ebbed.  North Korea is a wild card that could rear its ugly head at any moment, and the JPY and CHF, followed by the USD, are the preferred safe-haven assets in which to pile in the event something there becomes volatile.  The FOMC has two remaining meetings this year – November 1 and December 13.  No change in rates is expected at the first, but pay attention to economic data over the next ten+ weeks, which will drive the probability of a potential hike at the second.  Next week’s unemployment report will likely be impacted by the hurricanes so if it is a weak report, traders have an excuse to discount it.  This week’s home sales and durable goods reports will be noted but likely not too meaningful, while the PCE deflator on September 29 will command more attention.  Twelve Fed officials will speak this week, including Ms. Yellen tomorrow.  Any time those talking heads are chattering, the market listens.

Lastly, a quick check on the dollar’s YTD performance against a basket of currencies: 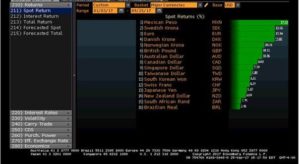 As always, please reach out to me if you have any FX-related needs, thoughts, questions on the market, or transactions to execute.

Compliments of Bannockburn Global Forex, a member of the EACCNY