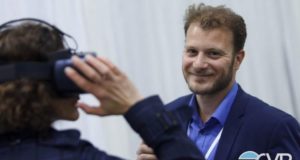 The Revinax team continues to reap in the distinctions at this end of year. On December 6th, our CEO, Dr Maxime Ros, was elected Associate Member of the French National Academy of Surgery, l’Académie Nationale de Chirurgie. He was awarded this distinction for his work on how immersive 3D virtual reality can contribute to teaching and training surgeons.

The National Academy of Surgery also takes an active interest in training and recruiting surgeons. In this context, Dr Maxime Ros, the Revinax CEO, was elected Associate Member of the National Academy of Surgery during its general assembly on December 6th, 2017. He was awarded this distinction for his work on immersive 3D virtual reality tutorials for surgical training purposes.

« This is a great honor, which confirms the interest in our work and the open-mindedness of the French Academy of Surgery, which is firmly anchored in today’s culture.» Dr Maxime Ros, neurosurgeon and CEO of Revinax

Revinax was created in 2015, in response to the fact that over 5 billion people in the world don’t have access to surgery. The initial goal of the company was to open up access to surgical training to people across the world, thanks to virtual and mixed reality. In November, Revinax added a worldwide first to their list by introducing mixed reality in the OR.

This year, the company also extended its unique approach to include all professions that require highly technical skills, which was met with increasing enthusiasm by a steadily growing audience. Revinax was selected by the European Space Agency to develop immersive tutorials for astronauts. In order to achieve their goals for 2018, the team has also launched a crowdfunding campaign on the WiSeed platform.

For more information on our team and unique approach, don’t hesitate to contact us.

Compliments of Revinax, a member of the EACCNY