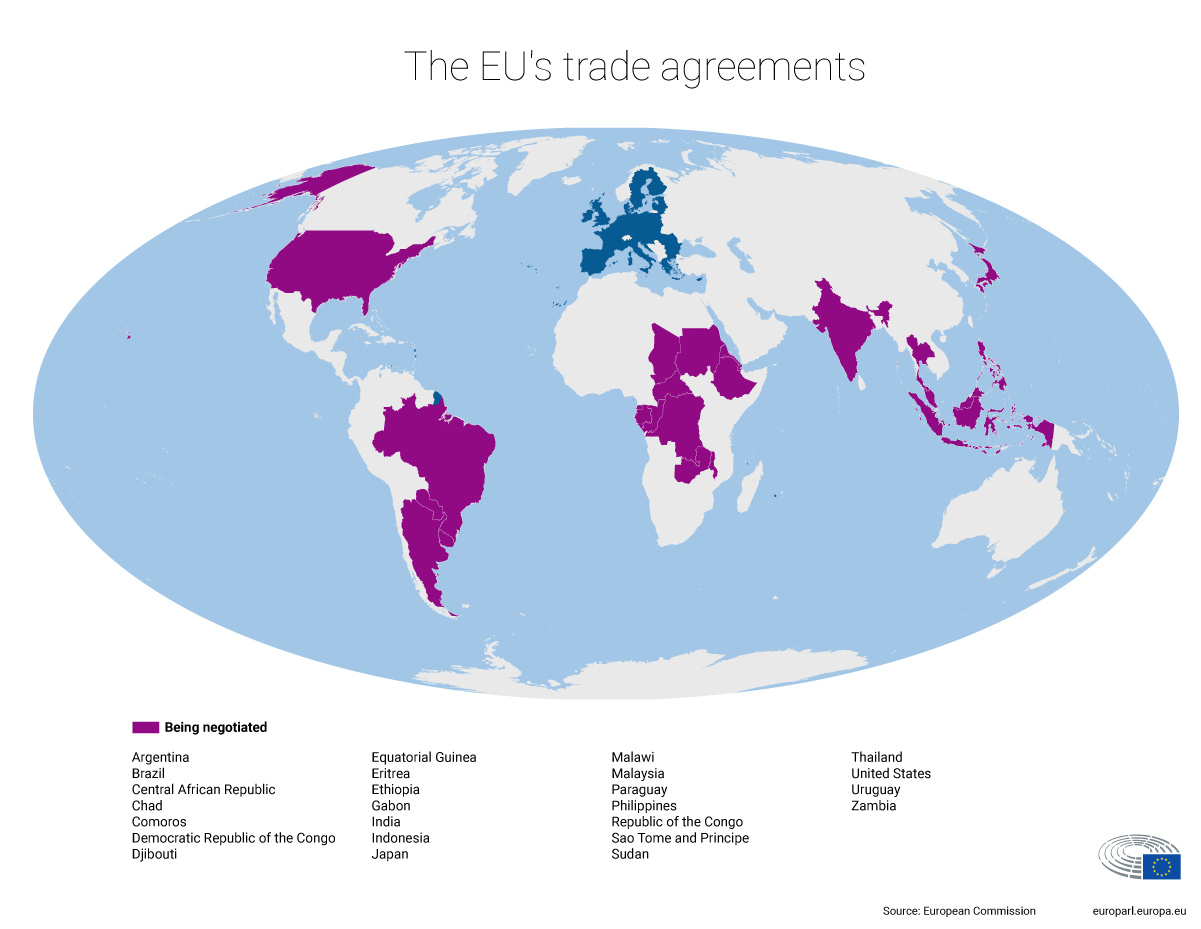 The international trade committee votes on 24 January on the Comprehensive Economic Trade Agreement or Ceta, but this free trade agreement with Canada is far from the only deal the EU is working on. Various deals are currently being negotiated right across the globe, but they can only enter into force if the European Parliament approves them. Read on for an overview of the negotiations in progress and an explanation of how the process works.

The EU has different types of agreements in place with countries. They can focus on reducing or eliminating tariff barriers or establishing a customs union by removing customs duties and establishing a joint customs tariff for foreign imports.

It’s not all about tariffs though. It could also be about investment and how to deal with disputes involving investment. For example, when a company feels a decision by a government is affecting its investment in that country. Non-tariff barriers are also vital such as product standards (for example the EU has banned certain hormones in cattle farming over health fears).

The negotiations for Ceta finished in September 2014 and the agreement was signed on 30 October 2016.

However, Parliament will still need to approve it before it can ultimately enter into force. The international trade committee votes on the deal on Tuesday 24 January and then all MEPs will still have to vote on it during a plenary session at a later date. If approved, Ceta could already enter into force this year.

Other trade agreements are also in the pipeline.

Negotiations finished but not yet in force

Ceta is not the only trade agreement where negotiations have finished but have not yet entered into force. Other trade agreements in this category include:

The Transatlantic Trade and Investment Partnership (TTIP) with the United States has proved very controversial due to concerns over product standards and the resolution of investment disputes. Since July 2013 there have already been fifteen rounds of negotiations. The latest round took place in October.

In Asia negotiations are ongoing for:

Southern Mediterranean and Middle East: various agreements, including association agreements with eight countries to especially boost trade in goods. Also talks on expanding these agreements in areas such as agriculture and industrial standards with individual countries.

There are no other free trade negotiations ongoing, but there are other talks as well such as negotiations for a comprehensive EU-China investment agreement. This was launched in November 2013 and the latest negotiation round took place in September, but no date has been set yet for the next round of negotiations

There’s also the Trade in Services Agreement (TiSA), a trade agreement currently being negotiated by 23 members of the World Trade Organisation (WTO), including the EU. Together, the participating countries account for 70% of world trade in services.  There have already been 14 negotiation rounds, but the next steps still need to be determined.

Since the Lisbon Treaty entered into force in 2009, trade agreements need the Parliament’s approval before they can enter into force. MEPs also need to be regularly updated on progress during negotiations.

Parliament has already shown it will not hesitate to use its veto if there are serious concerns. For example MEPs rejected the Anti-Counterfeiting Trade Agreement (Acta) in 2012.

Compliments of the European Parliament