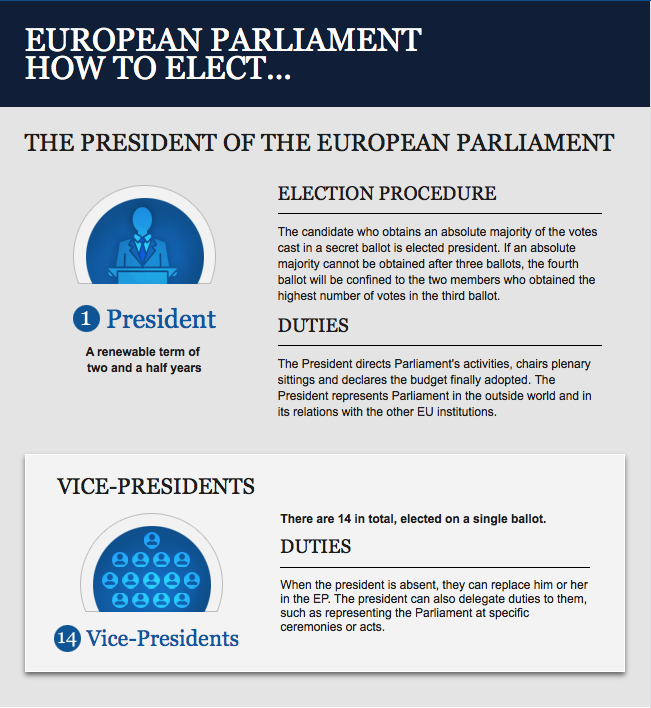 Parliament will kick off the second half of its five-year term with the election of a new president, 14 vice-presidents and five quaestors during next week’s plenary session. On 17 January MEPs will elect a successor to current president Martin Schulz, who is stepping down and will then go on to decide on who will be vice-presidents and quaestors. Read one to find out more about what they do, who is eligible to stand and how they are elected and follow the votes live on our website.

Why are there elections now?

The Parliament is elected for five years, but the term of office for president, vice-presidents, quaestors and committee chairs is two-and-a-half years. So the elections are held at the beginning of a parliamentary term and at mid-term.

Who can stand as a candidate for president?

Any MEP can stand if they are backed by a political group or a minimum of 5% of all MEPS (which currently means at least 38 MEPs).

How does the presidential election work?

The election starts on Tuesday 17 January at 9.00 CET and is done using a secret ballot. MEPs mark their preferred candidate on a ballot paper and place the vote in a ballot box, overseen by eight tellers chosen from among MEPs.

A candidate getting an absolute majority of the votes cast (50% + 1) is elected. Blank or spoiled ballot papers are not counted.

If there is no winner after the first ballot, the same candidates or new candidates can be nominated for a second round of voting under the same conditions.  This can be repeated a third time if necessary.

If no-one is elected at the third ballot, the two highest scoring candidates go to a fourth ballot, where the winner is decided by simple majority. If there is a tie, the older candidate is declared the winner.

What does the president do?

The president oversees all of the Parliament’s work, its governing bodies and plenary debates. He or she represents the Parliament in all legal affairs and external relations and at the start of every European Council summit sets out the Parliament’s point of view about the items on the agenda.

The president also signs the EU budget into law and co-signs legislation with the president of the Council.

What about the election of the vice-presidents?

Following the election of a new president, MEPs will proceed with the election of 14 vice-presidents. Candidates are nominated in the same way as the president and are elected by secret ballot. All candidates are on a single voting list. Each MEP may cast as many votes as there are posts available (up to 14 in the first round). In the first round candidates getting an absolute majority of votes cast, up to 14, are elected. If posts are still empty, a second round of voting will be held and then a third, after which a relative majority is enough.

If only 14 candidates are nominated, they will be elected by acclamation and a vote is held to determine the order of precedence.

What are quaestors and what do they do?

On Wednesday 18 January MEPs are scheduled to elect five quaestors from their ranks. These quaestors are responsible for administrative and financial matters directly affecting MEPs.  They are elected in a similar way to the vice-presidents.

Compliments of the European Parliament