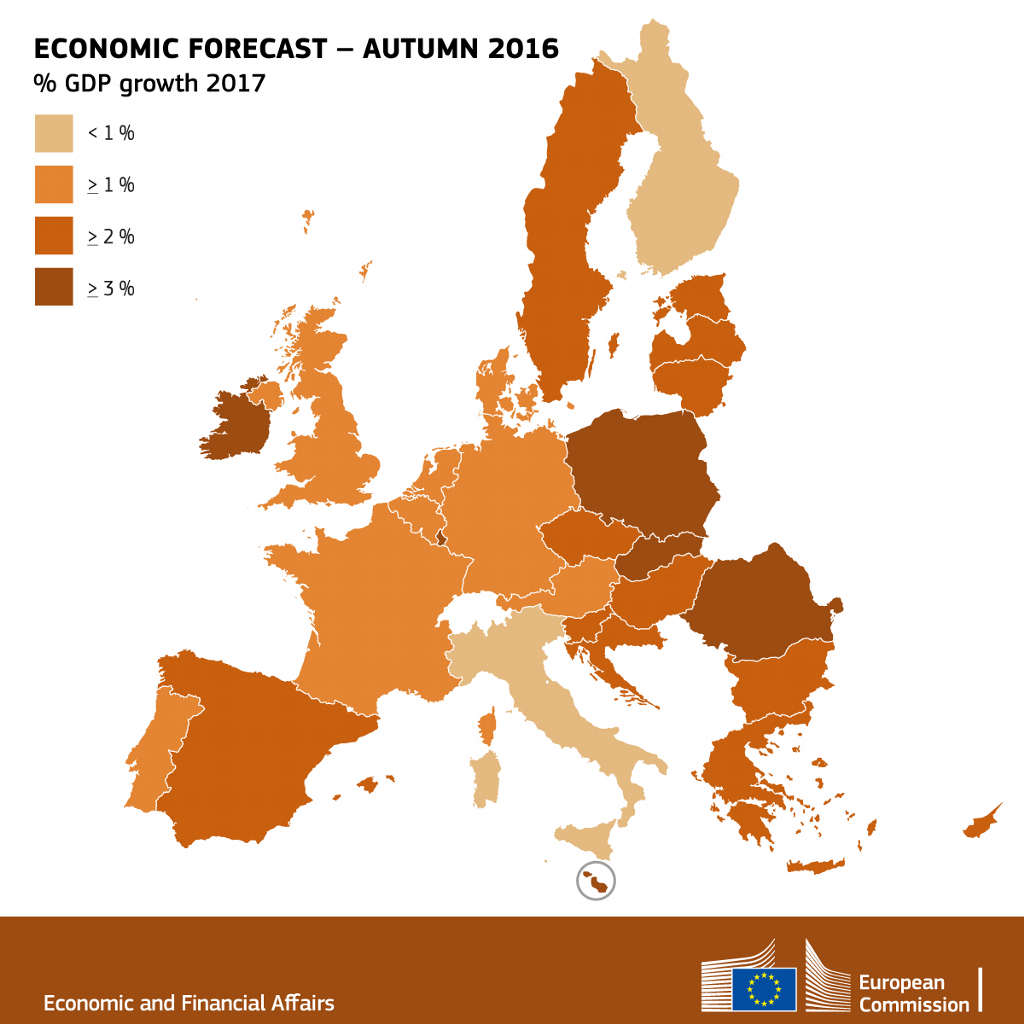 Private consumption is set to remain the primary engine of growth through to 2018, supported by expectations for employment to continue growing and wages to pick up slightly. Borrowing costs remain supportive to growth due to exceptionally accommodative monetary policy. The euro area aggregate budget deficit is set to continue to edge down, while the fiscal stance is projected to remain non-restrictive. Investment is set to continue increasing.

However, political uncertainty, slow growth outside the EU and weak global trade weigh on growth prospects. There is also still a risk that the economy’s weak performance in recent years could hold back growth, and persistent slack points to the possibility of faster growth without undue inflationary pressures. Moreover, in the coming years, the European economy will no longer be able to rely on the exceptional support it has been receiving from external factors, such as falling oil prices and currency depreciation.

Vice-President Valdis Dombrovskis, responsible for the Euro and Social Dialogue, said: “EU economies have proven to be resilient. We expect all Member States economies to grow next year. In the light of increased global uncertainty, it is now even more important to pursue sound and prudent macroeconomic and budgetary policies. At the same time it is vital to address inequalities in our societies, so that no-one feels left behind.”

Pierre Moscovici, Commissioner for Economic and Financial Affairs, Taxation and Customs, said: “European growth will hold up in 2017 against a more challenging backdrop than in the spring. The pace of job creation, boosted by recent reforms in many countries, decreasing public deficits in the euro area, a pick-up in investment and more dynamic EU-intra trade are particularly encouraging. In these volatile and uncertain times, no effort must be spared to safeguard and strengthen this recovery – and ensure that all sections of society feel its benefits.”

All Member States to benefit from the current recovery

While the trend of widely differing economic performance continues, EU GDP is now higher than before the crisis and GDP in some Member States stands more than 10% above its trough. Over the forecast period, economic activity in all Member States is set to increase further but to remain uneven.

Having suffered from low demand growth and expectations of weak potential growth, ongoing corporate debt reduction in some Member States and heightened uncertainty, the investment environment is finally brightening and investment is expected to pick up in 2018. Projects financed under the Investment Plan for Europe, as well as – in some Member States – projects co-financed with EU funds from the 2014-2020 programming period, should increasingly support private and public investment as they enter their implementation phase. Overall, investment is forecast to grow by 3.3% this year, 3.1% in 2017 and 3.5% in 2018.

Employment in the euro area and the EU is expected to grow by 1.4% this year, faster than at any time since 2008, though slack remains in the labour market. Job creation is set to continue benefiting from domestic demand-led growth, moderate wage growth, as well as fiscal policy measures and structural reforms in some Member States. Employment growth is forecast to remain relatively solid, though slightly moderating in 2017 and 2018. Even though the labour force is expected to grow faster this year due to increased participation rates and the gradual integration of refugees in the labour market, unemployment in the euro area is expected to decline relatively fast, from 10.1% in 2016 to 9.7% next year and 9.2% in 2018. The trend is expected to be the same for the EU as a whole, with unemployment set to fall from 8.6% this year to 8.3% next year and 7.9% in 2018. For the euro area, this is the lowest level since 2009. It compares to a 2013 peak of 12%, but remains well above the 7.5% low reached in 2007.

Inflation to pick up from a very low level, driven by energy prices

Inflation in the euro area was very low in the first half of the year due to falling oil prices, but started to pick up in the third quarter as the impact of past price decreases began to wear off. Inflation should now climb moderately above 1%, as oil prices are assumed to rise. Core inflation, which excludes volatile energy and food prices, is expected to rise gradually amid higher wage growth and a further narrowing of the output gap. Overall, inflation in the euro area is expected to rise from 0.3% in 2016 to 1.4% in both 2017 and 2018. In the EU, inflation is forecast to rise from 0.3% this year to 1.6% in 2017 and 1.7% in 2018.

Both the aggregate public deficit and the government debt-to-GDP ratio of the euro area are expected to continue declining over the forecast horizon of 2017-2018. The public deficit for the euro area is expected to fall from 1.8% of GDP this year to 1.5% in both 2017 and 2018. This is a result of lower social transfers in line with falling unemployment, wage bill moderation in the public sector and low interest rates, which make debt-servicing cheaper. The debt-to-GDP ratio is expected to fall from 91.6% in 2016 to 89.4% in 2018.

Global GDP growth fell further in recent months and is now expected at 3.2% this year, its lowest since 2009. As growth in emerging markets and the United States is expected to strengthen, however, the global growth rate (excluding the EU) is expected to pick up modestly. The current weakness of global trade outside the EU is weighing on euro area exports despite the resilience of intra-euro area trade. World trade, which has been exceptionally fragile this year, is expected to grow more slowly than GDP in 2016 before rising back in line with GDP growth in 2017 and exceeding it slightly in 2018. Imports are expected to grow faster than exports in the euro area. The euro area’s current account surplus is forecast to decline over the forecast horizon.

Downside risks to the forecast have risen

Risks to the forecast have risen in recent months and are clearly tilted to the downside, including as a result of the UK ‘leave’ vote, which has raised uncertainty and can be seen as an indicator of heightened policy risks in the current volatile political environment. External risks, such as uncertain economic trends in China and the risk of aggravating geopolitical conflicts have also risen.

This forecast is based on a set of external assumptions concerning exchange rates, interest rates and commodity prices with a cut-off date on 24 October 2016. The numbers used reflect market expectations derived from derivatives markets at the time of the forecast. For all other incoming data, including assumption about government policies, this forecast takes into consideration information up until and including 31 October 2016. Only policies credibly announced and specified in adequate detail are incorporated. Projections assume no policy changes.