Article 50 of the Treaty of the European Union (December 2009) sets out the procedural requirements for a member state to terminate its membership. Legal withdrawal would mean that EU Treaties and their Protocols would no longer apply, and EU financial programmes would be phased out.

If the UK votes to leave the EU on Thursday, the result will not immediately have a binding legal effect. The UK government would need to launch a proposal to activate Article 50, and hold a vote in Parliament. Once this vote had passed, the UK could then formally notify the EU of its intention to withdraw. 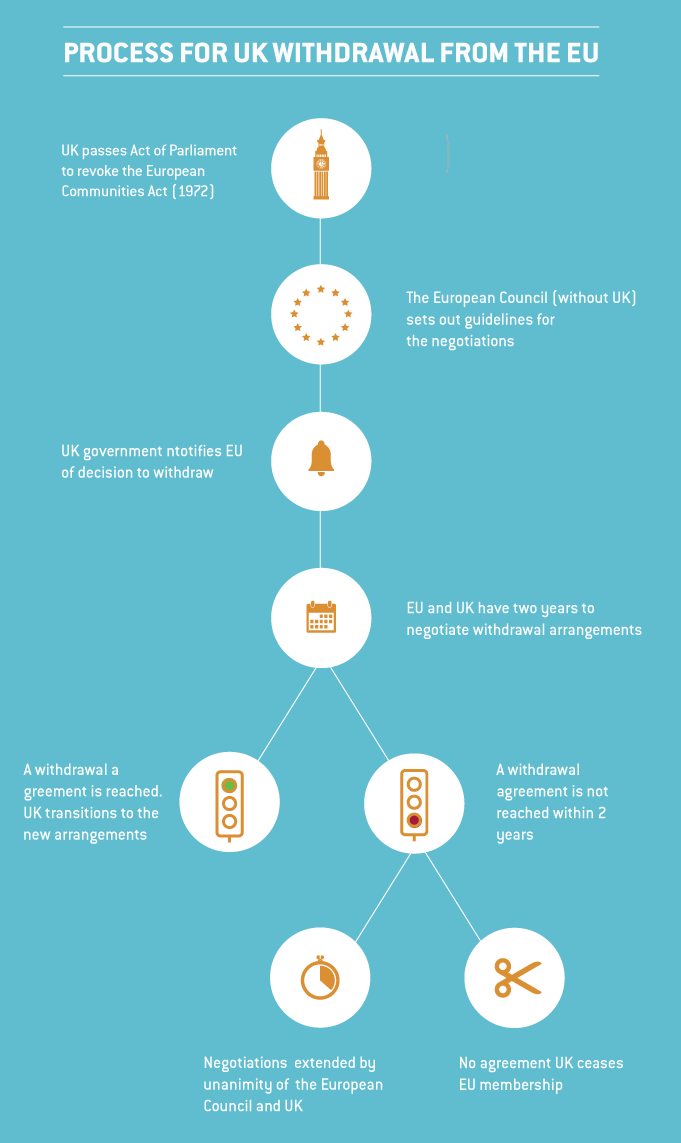 What would Brexit mean for the EU budget?

The UK enjoys a special reduction in its contribution to the EU budget, known as the rebate. Even after this, the UK is the fourth largest net contributor (after Germany, France and Italy). In 2014, after application of its rebate, the UK contributed £13 billion to the total EU budget of £118.9 billion. This was 0.52% of its Gross National Income (GNI). However, out of that £13 billion, the UK received back around £4 billion in “public sector receipts” —mostly as subsidies to its agricultural sector. Therefore, if the UK votes to leave the EU, there will be consequences for the EU budget in both size and distribution. But the overall impact would depend on the agreement reached between the EU and the UK.

What are the UK’s capital contributions to the European Central Bank?

What would happen to EU regulations in the UK?

An immense body of EU legislation has accrued during the 40 years of UK membership, which is both directly and indirectly applicable to the UK. The UK Government estimates that 50% of  UK legislation with a significant economic impact comes from the EU legislation. In the event of an exit, the UK would possibly need to re-examine the entire body of EU law to determine just how much influence EU legislation has had on UK domestic law. There are 6,987 directly applicable EU regulations, at least some of which would need to be replaced by equivalent UK laws.

How long do trade negotiations take?

The EU currently has Preferential Trade Agreements (PTAs) with 52 countries and is negotiating trade agreements with another 72 countries. If the UK exits it will need to renegotiate with the EU and with 124 other countries to redefine its own trade status (Huettl and Merler, 2016).

What could happen to UK and EU migrants?

If UK votes to exit the EU, UK citizens will no longer have EU citizenship status, as the status was created by EU Treaties. However, unlike the status, the rights derived from the EU citizenship are harder to determine, such as the rights to reside and terms of access to public services in the residing country. The rights that EU migrants enjoy in the UK and similarly the rights of UK migrants living in the EU will depend on the nature of the withdrawal negotiations and the final agreement.