Celebrations in advance of Croatia joining the European Union scheduled on July 1, 2013 started with a Breakfast at Tiffany at the flag ship store on Fifth Avenue, with a concert by Julian Rachlin and Friends, bringing together the Big Apple’s business and cultural leaders. Tiffany & Co is known the world over for its spectacularly beautiful jewelry and for its support for culture.

Tiffany & Co. issued a statement that it was honored to host world-renowned musicians, including violinist Julian Rachlin, who captivates audiences with their consummate musicianship and outstanding interpretations. This special performance salutes the internationally acclaimed Julian Rachlin and Friends festival, founded by Rachlin in 2000, which is held annually in the UNESCO World Heritage city of Dubrovnik, Croatia. The festival attracts musicians from all over the world, as well as classical music enthusiasts.

The Executive Vice President of Tiffany and Co. Mr. John King welcomed guests to the Breakfast at Tiffany for Croatia, stating that: “We are delighted to be joined by several world-renowned musicians, including violinists, Julian Rachlin, Inon Barnatan and Carter Brey, who will treat us to a thrilling performance following breakfast. The program they’ve prepared celebrates the 12th annual Julian Rachlin and Friends Festival, which takes place in Dubrovnik, Croatia. Tiffany is also celebrating this year. Two thousand and twelve marks our 175th anniversary. Tiffany has long supported the arts, and today we’re truly beneficiaries of that support.” Dr. Hedvig Hricak, Chair, Department of Radiology; Carroll and Milton Petrie Chair, Chair of the Department of Radiology at Memorial Sloan-Kettering Cancer Centre also welcomed guests to Tiffany & Co. with brief remarks and expressions of her support for the Julian Rachlin and Friends Festival in Dubrovnik. In a statement to Croatian media, Dr. Hricak said “Thinking of ways in which I could help Dubrovnik, other than mainly through medicine, we decided to organize Breakfast at Tiffany’s in cooperation with our friends from the famous jewelry store, where we had plan to promote the cultural festival Julian Rachlin and Friends. We achieved all designed goals of our initial idea and I am very glad and grateful to all of those who participated in recreation of the scents of Dubrovnik, its city walls and the sea on a New York Saturday morning.”

The Mayor of Dubrovnik Andro Vlahusic also welcomed guests to the breakfast, stressing the beautiful connections between Dubrovnik and New York City, the importance of the Julian Rachlin and Friends festival in Dubrovnik, and welcomed all to visit Dubrovnik and enjoy the gems of the city. 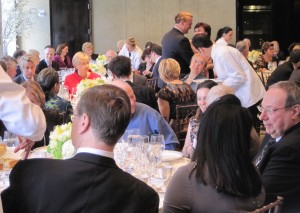 The Croatian Consul General in the Big Apple Marijan Gubic was privileged to address the breakfast and read a message to Julian Rachlin from the President of the Republic of Croatia Dr. Ivo Josipovic, which touched everyone present, particularly Julian Rachlin. The President expressed regret for not being able to join Julian Rachlin and Friends to celebrate at the Breakfast at Tiffany, stating: “The place where you have gathered has a strong symbolic meaning. In the first place, it represents something that is very precious to us. This preciousness can be expressed by means of some amount of money, albeit such a measure is only partial. Our emotions, our engagement in something that matters to us and in the relationship to people we care about most, makes up a much greater part of this preciousness and uniqueness. For this very reason, you are today in an ideal place to establish a bond with Dubrovnik in your thoughts and through music, Dubrovnik being one of the most precious places among the Mediterranean cities-gems the Croatian coast of the Adriatic Sea is studded with.” The President concluded the message with: “I take this opportunity to thank him for once again. At the same time, having again the honor to be this year’s patron of the festival Rachlin and Friends, I would like to invite all of you to Dubrovnik and express a warm welcome to you in Croatia. I congratulate you on this uniquely beautiful celebration of friendship and music that will establish a direct bridge between New York City’s Fifth Avenue and Dubrovnik’s Stradun. As my thoughts have come to you today, I invite you too to follow the Moon River and join us in Dubrovnik. I also take this opportunity of thanking Tiffany & Co. for hosting today’s celebration of the beauty of music and culture.”

The Croatian Consul General took to opportunity to underscore the importance of bringing together so much talent and friends of Croatia to celebrate Dubrovnik at one of the world’s iconic locations and themes, stating that “Breakfast at Tiffany is a wonderful opportunity to celebrate the beauty of culture and music on one of the most prestigious avenues in the world, linking Croatia and the United States, Dubrovnik and New York City with a unique performance by Julian Rachlin and his friends. Dubrovnik and New York City share this unique capacity to celebrate music and culture, and enjoy the promise of freedom.” 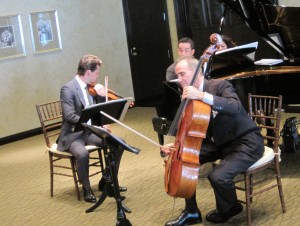 Julian Rachlin addressed guests at the opening of the concert with words of appreciation to Tiffany & Co., the Croatian President and Mayor of Dubrovnik for their continuing support for the festival, as well as the composition by the Croatian Deputy Minister of Culture Berislav Šipuš, who prepared a special arrangement of “Moon River” for the breakfast, a world premier. Julian Rachlin’s repertoire included pieces from Ludwig van Beethoven, Sonata for Piano and Violin in A major op. 47 “Kreutzer Sonata” Adagio sostenuto-Presto, Franz Schubert, Trio for Piano, Violin and Cello in B flat major D 898 (op. 99) Andante un poco mosso, and Franz Waxman’s Carmen fantasy for Violin and Piano. Last year the world class Conductor Zubin Mehta and the Belgrade Philharmonic Orchestra opened the festival in Dubrovnik.

The event was supported by the Julian Rachlin & Friends International Festivals Inc. that was incorporated in 2011, and is chaired by George Votis. Members include Hanna Arie-Gaifman, Paul H. Epstein, Hedvig Hricak, Garry Parton and Marijan Gubic, and with the kind and generous support of Mr. Davor Djivoje from Networld, Inc. Advisors include: John Malkovich, Alberto Iglesias, Janine Jansen, Giya Kancheli, Mischa Maisky, Sir. Robert Moore KBE and Krzysztof Penderecki to the NYC based association supporting Julian Rachlin and Friends Festival in the United States.