To celebrate Europe Day 2014, New York City’s iconic landmark, the Empire State Building, will be lit up in the European Union’s flag colours, blue and yellow, for the sixth time – this year on Monday, 5th of May. 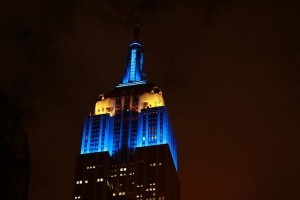 On the 9th of May 1950, French Foreign Minister Robert Schuman presented his historic proposal for an integrated European coal and steel community, indispensable to the maintenance of peaceful relations. This proposal, known as the “Schuman declaration,” is considered to be the founding document of what is now the European Union.

Today, the 9th of May has become a European symbol (Europe Day) which, along with the flag, the anthem, the motto and the single currency (the euro), identifies the political entity of the European Union. Europe Day is an occasion for activities and festivities that bring Europe closer to its citizens and the peoples of the Union closer to one another.

The European External Action Service (EEAS) will be joining the other European Institutions throughout the month of May to celebrate Europe Day worldwide. EU Delegations will lead a range of different events in their host countries on the theme of Europe in the World. Lectures, competitions, film festivals and other events organised by the EU Delegations in cooperation with Member States’ embassies will demonstrate the best the EU has to offer.
FOR MORE INFORMATION:

Visit the EU@UN website to learn more and to see the latest EU Statements delivered at the UN.