On 11 December 2012, New York City’s iconic landmark, the Empire State Building, will be lit in the European Union’s flag colors, blue and yellow, to mark the award of the Nobel Peace Prize.

2012 marks the 62nd Anniversary of Schuman’s historic proposal for an integrated European coal and steel community. 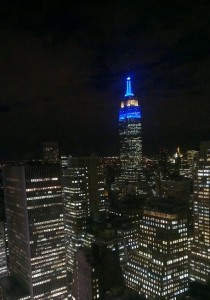 About the Nobel Peace Prize 2012

In its announcement on 12 October, the Norwegian Nobel Committee said its decision was based on the stabilising role the European Union has played in transforming most of Europe from a continent of war to a continent of peace.

The EU’s most important achievement, according to the committee, has been the “successful struggle for peace and reconciliation and for democracy and human rights.”

On 11 December 2012, New York City’s iconic landmark, the Empire State Building will be lit in the European Union’s flag colors, blue and yellow, to mark the momentous occasion. This photo, taken in 2011, showcases the colors.

The EU will give the award money (€930,000) to projects supporting children who are victims of war and conflicts.

Mirroring the solidarity of all Europeans, and committed to the spirit of helping the most vulnerable, the EU decided to dedicate the Nobel Peace Prize money to help children around the world who are deprived the chance of growing up in peace. Matching the prize money with a sum of up to 2 million Euro, the EU will fund humanitarian projects providing children in conflict situations with education.

The projects the EU will fund will be selected in line with normal procedures for funding humanitarian actions. Humanitarian organisations and agencies accredited with the European Commission have been invited to propose projects. The EU will in particularly support projects that for example deal with setting up child-friendly spaces, educational activities in refugee camps, education about conflict resolution, activities that raise awareness about the risks of mines among children, as well as non-formal education that helps children keep up with their curricula until the formal school system is re-established when the conflict ends. The selected projects are expected to be announced by the end of 2012.

Education is crucial for both the protection and the development of children affected by conflict. As well as ensuring the
learning that is a fundamental part of their development, educational activities provide children with psychosocial support, helping give them back at least some sense of normality. Today, 90% of victims of conflicts are civilians. Half of them are children. And of the approximately 75 million children who are out of school worldwide, half live in conflict areas. Despite these needs humanitarian assistance for education is severely underfunded, is mainly because the life-saving provisions of food, shelter and medicine take priority.

To learn more about the European Union at the United Nations, please click here.