Soaring through the sky, using not a single speck of conventional fuel, Solar Impulse achieved its fourth world record in July as it successful flew from coast to coast across America. With the weight of a car and the wingspan of a 747, Solar Impulse, as stated by Bertrand Piccard, “was not built to carry passengers but to convey messages.” In hangar 19 of JFK on the 13th of July one could feel the excitement in the air as the Consulate General of Switzerland in New York, an EACC NY member, hosted a celebration of this momentous achievement. With children running around with toy airplanes, and sunshine facepaint, the future of aviation, or a possible future of aviation, could most assuredly be seen.

A five year old eagerly asks the question of whether or not her family will be able to fly in an airplane like this soon. The response from the pilots, Bertrand Piccard and André Borschberg, spoke volumes of the team’s vision as they told the girl that if everybody continues to work hard and believe in the possibility, then hopefully by the time she is the age of her mom she will be able to take a ride in one. Walking away with a face painted with the image of the sun, she murmured to her mom about how exciting this was. 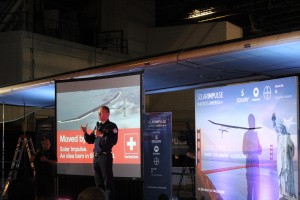 In the speeches of both pilots, they talked about living life believing that the impossible can be made possible. Given the background of the Solar Impulse project, they are speaking from experience. Before achieving their first record, there was around seven years of calculating, constructing, and testing via simulation and otherwise. Currently Solar Impulse holds records for the 1st day and night solar flight, Solar European flights to Brussels and to Paris-le Bourget International Airshow, Solar intercontinental flight from Switzerland to Morocco, and now their flight ‘Across America’.

With some challenges in the landing at JFK, there are more than simply issues of public support to address. The engineering and technology behind this craft are extraordinary, and really speak for the innovation and ingenuity associated with the Swiss. From a carbon fiber honeycomb structure produced by a company renowned for boats, to the system of 11,628 monocrystalline silicon cells, horizontal stabilizer, and the lithium-polymer batteries – every component is selected for its efficiency, particularly regarding weight. There is also the current challenge that due to weight and the engineering of the craft, only one person – the pilot, can be on board at one time. This makes long trips more of a challenge. But as the pilots kept stressing, nothing is impossible. 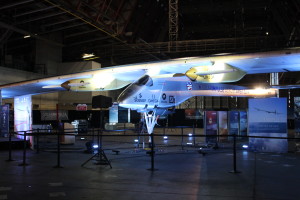 While Solar Impulse has already proven a point to many, its task is not yet finished. It will continue to make what many believe impossible, possible, as in 2015 the team will attempt to fly around the world, using nothing but the power of the sun. While the Solar Impulse project is intended as symbolic, it does expand the possibilities in the future of aviation. In today’s world, with climate and emissions concerns, there is indeed a push for more efficiency in fuel. The European Union’s Emissions Trading System (ETS), is a clear demonstration of the evolving desire to incentivize the reduction of emissions in aircraft. While this is opposed by the US, the ETS combined with pressure from environmentalists, will hopefully push investment in alternative technologies for fueling aviation. Solar Impulse is an example of such investment desires. With over 90 backers, there has been over 90 million Euros (or 115 million dollars) invested into this future of fueling aviation. This alone speaks volumes of the wishes for the future.

It seems that in the future of aviation, it will be more than just Superman who jets off into the sunset using the power of the sun.

Obviously, when you book your next flight across the Atlantic this year, you should not expect to fly in a plane which uses solar power. But hopefully, if we all work towards a goal of greener transportation, the next generation will be able to travel via plane in a way that is less harmful to our environment. We cannot expect such innovations over night, but with projects such as Solar Impulse paving the way, breaking through the walls of what has been thought impossible – the future seems a little brighter for all of us and the generations to come.

For more information on Solar Impulse, please check out their website here.

This article also appears at www.EuropeanPublicAffairs.EU , with the author’s permission. 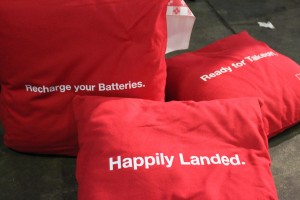