Sports equipment chain Golfsmith International has shared the fate of many others in today’s retail landscape: a bankruptcy filing and a list of closings. In what Time Magazine has dubbed the “age of Amazon,” some of the biggest names in retail have suffered from sinking sales and have shuttered a large number of stores in recent years. E-commerce giant Amazon has established their presence on every corner of the market, as it offers discounts and prompt shipping for a seemingly endless range of products, such as electronics. This forced RadioShack, a former electronics-go-to, to vacate about 1,800 US locations in 2015 alone. Walmart is also feeling the Amazon effect and will close 154 storefronts to focus on e-commerce.

The rise of “fast fashion” is another important factor, driving household-name apparel brands such as Ann Taylor, Gap, Old Navy and Banana Republic out of their brick-and-mortar shops. Chains that can mass-produce the newest styles at a fast pace, such as H&M, TopShop and Zara, seem to be one step ahead of names like American Eagle, Abercrombie, and Ralph Lauren. Since 2014, American Eagle Outfitters has closed about 150 stores in total, and Abercrombie & Fitch has vacated about 60 stores in each year since then. Gap, Inc. announced in May that it will close another 75 Old Navy and Banana Republic stores on top of 175 last year in an attempt to recover from five straight quarters of declining sales.

These thousands of closings and shrinking sales have a substantial impact on the CMBS market, as roughly 35% of outstanding conduit loans are backed by retail properties. Here are the major retailers whose recent closings have some of the highest CMBS exposure to date.

Sports Authority — which was the nation’s largest sporting goods retailer 10 years ago with over $1.1 billion in debt — filed for chapter 11 bankruptcy protection this past March. The firm originally planned to close 140 stores, but it declared that it will shut down all 450 US locations and sell all assets just two months after the filing. According to the Wall Street Journal, the big-box athletic gear vendor struggled with the progression to online shopping. Since then, its high-end competitor Dick’s Sporting Goods has acquired all remaining Sports Authroity assets and intellectual property.

Our data reflects that 94 CMBS loans are backed by properties that list Sports Authority as a current tenant. One of those is the $146.7 million Northridge Fashion Center loan, which is backed by a California mall that featured Sports Authority as its largest tenant. This note represents 14.3% of WFRBS 2012-C7.

From the start of 2014 to the second quarter of 2016, Office Depot shuttered 400 US locations after seven straight quarters of disappointing sales. Now, the office and school supplies retailer plans to close an additional 300 stores by 2018 in order to trim total costs by $250 million. There are currently about 1,100 Office Depot locations in the US.

In 2013, Office Depot bought out its rival OfficeMax. But the firm still faces competition from the nation’s largest office-supplies chain in Staples, and Amazon, which also supplies discounted office and school materials.

Office Depot has yet to release details on the additional 300 locations set to close, but there is already a long list of 168 CMBS loans that are backed by properties with Office Depot as a top five tenant. Two pieces of debt to watch are the $55.7 million Marketplace at Northglenn loan (19.6% of MSC 2006-HQ8), and the $55.7 million JANAF Shopping Yard note (5% of COMM 2013-CR9). Both underlying properties feature Office Depot and Sports Authority as its major tenants.

Last February, RadioShack declared bankruptcy and released its list of 1,784 stores that were to close within the following two months. RadioShack oversaturated its markets with a huge footprint of 4,000 US stores, many of which were located in such close proximity that they competed against one another. CNN reported that the states with the most closings were California, New York, and Texas. The remaining stores were sold to hedge fund Standard General.

The closings touched 201 CMBS loans that were either directly affected (where RadioShack was listed as a tenant) or indirectly affected (where a closing RadioShack was in the same retail center or in very close proximity). In the majority of these cases, RadioShack is either not listed as a top five tenant or it is situated within a large portfolio. However, one note to watch is the $81 million City View Center loan, which is backed by an Ohio mall that listed RadioShack as a top five tenant before it closed, as well as an OfficeMax. This loan makes up 3% of MSC 2007-IQ14.

In January, Macy’s put 36 stores on the chopping block, 10 of which back CMBS loans. However, the department store announced in early August it will be closing another 100 US locations in 2017. Macy’s currently operates 728 locations in the US, many of which have reported declining sales and dwindling foot traffic.

While the closings announcement was initially positive for Macy’s shares (they rose 16% following the news), it brings a sizable amount of risk to the CMBS market. There are currently 112 CMBS loans backed by properties that feature Macy’s as a top five tenant, and Commercial Observer reports that an additional $28 billion in CMBS is exposed to Macy’s as a shadow anchor.

The $240 million Westfield Centro Portfolio loan (43.3% of JPMCC 2006-LDP7) is backed by five malls, three of which feature Macy’s as its largest tenant. Macy’s occupies about 14% of the portfolio’s total gross leasable area (GLA).

Hancock Fabrics, which specialized in arts and crafts supplies and home décor, filed for chapter 11 bankruptcy protection in February. The company could not withstand competition across the country from Michael’s, Jo-Ann Fabrics and Crafts, and online suppliers. Another contributor to Hancock’s downfall was its pension and employee benefits program, which was apparently underfunded by $44 million. The company’s original reorganization plan was to shutter 70 of its lowest-performing storefronts. But just two months later, the company stated that it will close all 255 shops.

24 conduit loans are affected by the Hancock bankruptcy, all of which had Hancock Fabrics listed as a top five tenant. This includes the $24 million Regency Park Shopping Center loan (4% of WBCMT 2006-C27), where Hancock Fabrics was the second-largest tenant in the underlying shopping center.

Sears Holdings, which merged with Kmart in 2005, has been struggling with decreasing sales for 30 straight quarters. According to Fortune, the company has been hit with $8 billion in losses since 2010, and has struggled most with declines in apparel and electronics sales in the past couple of years.

Sears discretely closed over 100 US stores in 2014, which affected 23 CMBS loans. This past April, the department store chain announced it will shutter another 10 Sears locations and 68 Kmarts. All 78 of those stores will be closed by the end of this month. This round of closings impacts another 10 CMBS loans, bringing the total amount of notes affected to 33. The $31.8 million Midland Mall loan is backed by a retail center anchored by Sears, which once occupied 18% of the GLA. The note makes up 8.2% of LBUBS 2006-C6.

The closings are repercussions of JCPenney’s cash crisis in 2011-2013, which took place under CEO Ron Johnson. Johnson aimed to pull drastically falling sales back up by transforming the aesthetic of the department store chain to a bolder, high-end style. Unfortunately, his results were catastrophic. Johnson blew $170 million towards executive recruitments and still failed to revolutionize the company’s culture and reputation. By the time he was ousted in 2013, JCPenney’s sales were down by $6 billion.

Damage control under current CEO Marvin Ellison is slow, but moving in the right direction. Sales are inching upwards with the help of increased e-commerce sales. Of the 81 JCPenney closings since 2014, 22 of them back CMBS loans. One of the 22 locations served as an anchor tenant for the $76.7 million Hanover Mall loan (17.1% of JPMCC 2005-LDP5). The shuttering dropped the property’s occupancy by 15%.

Aéropostale filed for chapter 11 bankruptcy in May, after five consecutive years of dropping sales and three straight years of annual losses. A failure to adapt quickly enough to the shift towards fast fashion, coupled with a millennial disinterest in logoed apparel seemed to doom the young-adult clothing retailer. The firm closed another 113 of its 739 remaining US locations in May, including its high-traffic flagship in Times Square. Aéropostale stocks were officially delisted from the New York Stock Exchange in April, after its trading price dropped to $0.15.

The closures affected 33 CMBS loans, but the majority of the properties do not count Aéropostale as a top five tenant. However, one note to watch is the $87.3 million Mesa Mall loan. That note makes up 28.5% of BACM 2006-4. The underlying collateral is a Colorado mall that is anchored by Sears, but lost Sports Authority and Aéropostale as tenants.

Another loan to keep an eye on is the $87 million Bellis Fair Mall (6.1% of GSMS 2012-GCJ7). This note is backed by a shopping center in Washington that also lost Aéropostale and Sports Authority as tenants, and is currently anchored by Macy’s and Gap.

While once familiar stores have been closing at their fastest rate since 2010, the closings appear to represent struggling retail chains rather than a toiling retail industry. In other words, it’s “out with the old, in with the new” as consumer habits and preferences continue to change (which has always been the case). Though the widespread vacancies and bankruptcies represent troubling news to many CMBS loans, the average occupancy rate per retail loan has actually risen since 2010. 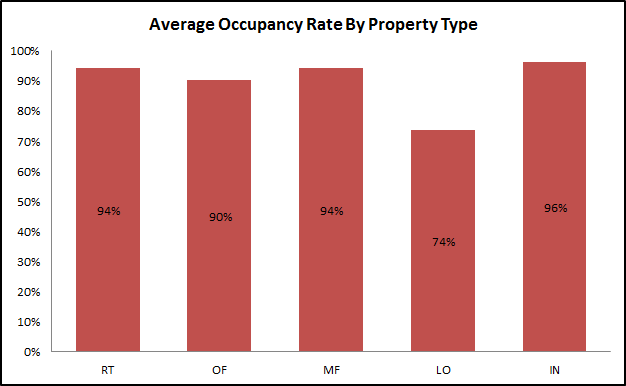 Experts say that we will continue to see heavy amounts of closings for once-established retailers. But rising, well-adapted companies, as well as grocers and food services, will continue to drive the retail industry forward. 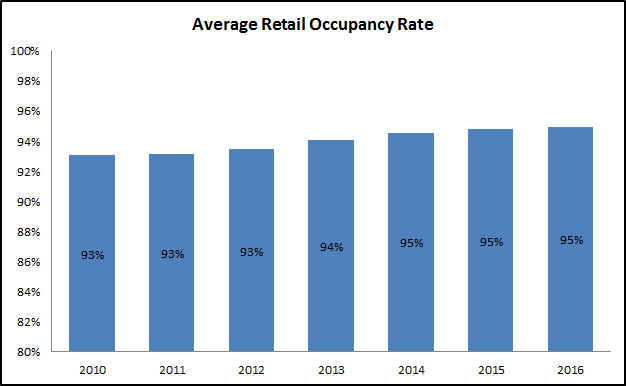 Compliments of Trepp –  a member of the EACCNY