Earnings reports for large banks gave a somewhat mixed picture. The main positive was that net profit was up, on the back of interest income gains and lower expenses. Loan loss provisions also declined as a function of the benign stage in the credit cycle. The main negative was that noninterest income fell, which caused total revenues to fall slightly.

We expect to see more market volatility, as regional and small banks report Q4 earnings over the next couple weeks, and as the new Trump Administration starts to impact bank legislation and regulation.

Overall commercial real estate lending growth started 2017 with gains, as two of the three major CRE segments posted positive growth. Construction and land development lending inched forward at a 1.2% annualized rate. Multifamily mortgage lending fell by -3.9%, after creeping ahead at a 1.1% rate the prior week. Commercial mortgages grew at a 7.4% annual rate. The weekly figures for all three of the CRE segments were below the year-to-date trends for 2016. 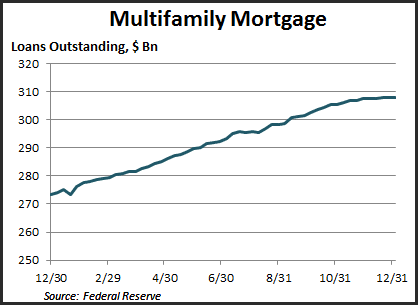