The inaugural reception at the Charlotte City Club was jointly hosted by the Consul General of Finland in New York, Ambassador Jukka Pietikäinen, and Honorary Consul Wiebusch on June 29, 2016.  The Opening ceremony was attended by approximately 50 guests including honorary consuls from numerous other countries, North and South Carolina state government officials, regional business, government and community leaders, as well as local media.

Consul General, Ambassador Pietikäinen, said in his inaugural remarks that the establishment of a Finnish honorary consulate for the states of North and South Carolina was deemed necessary due to the increasing number of Finnish companies establishing their presence in the region. Another decisive factor behind the decision was ever increasing cooperation in the field of research and investigation between the universities and research institutions.

Ambassador Pietikäinen emphasized that the new Honorary Consul, Mr. Todd Wiebusch has a proven track record of promoting trade and investments between Finland and the Carolinas. “Wiebusch is very familiar with Finnish hi-tech companies and with the existing academic programs between the universities. We feel privileged to have him as our local representative here. It is important for Finland to be present in a more visible way in this region which is one of the fastest growing economies in the United States.”

Mr. Wiebusch expressed his enthusiasm for his new position and told how he is looking forward to his new role. “The opportunity to serve as Honorary Consul for Finland in the Carolinas gives me a unique opportunity to serve two geographies and people that I care about greatly, and that have tremendously enriched my and my family’s lives”, he said. “I very much look forward to building on the existing links between Finland and the Carolinas and forging new relationships between the two in business, education and the arts.”

Honorary Consuls strengthen the relationship between Finland and the U.S. 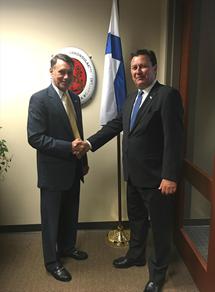 Consul General Pietikäinen congratulated Honorary Consul Wiebusch for his appointment at the premises of the new Honorary Consulate in Charlotte, North Carolina. Photo by Sarah Wiebusch.

The new Honorary Consul of Finland, Todd Wiebusch, is currently CEO of CHMG Capital, LLC, a private operating and investment firm focused on the health care industry.  He is also a partner in Courage Ventures, an early stage venture capital firm based in Helsinki focusing on the digitization of health/wellness, education technology and environmental industries. Mr. Wiebusch has worked for years to deepen the economic, academic and cultural relations between Finland and the United States, having hosted two high level Finnish delegations to the Carolinas and served as a host family for Finnish high school and college students.

Wiebusch considers the appointment a great honor and a privilege. His first trip to Finland was in 1992, and since then, he has visited the country more than 30 times. Since 2000, he has made several investments in the country and consulted with a number of Finnish companies interested in expanding to the US. “Combined, the Carolinas have 14,000,000 inhabitants, and if they were their own country, they would have the 20th largest GDP in the world.  I see a great opportunity to educate the business, and academic communities as well as relevant parts of state governments about possible ways to engage with their counterparts in Finland”, Wiebusch says.

The opening of Finland’s new honorary consulate took place at the Charlotte City Club. The ceremonies were attended by more than 50 guests and the atmosphere was festive.