The decline in valuations in Series C and later transactions from the peaks reached in the middle of 2015 has been well publicized. Valuations for Series B rounds have also fallen from their highs in 2015. In each case, the decline has been substantial. In Q2 2016, median valuations for Series B and Series C and later financings were below their medians for the past five years. On a more positive note, the percentage of up-round financings has remained high compared to the years prior to 2015. Moreover, amounts raised in Series A and Series B transactions remained strong; in particular, the median amount raised in Series A and Seed financings in Q2 was the highest it’s been in the past five years.

Up and Down Rounds 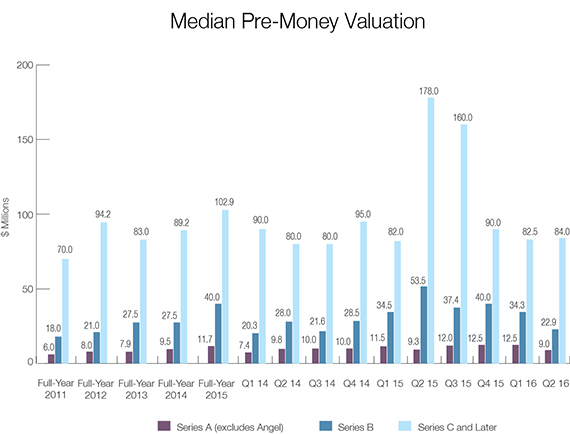 The median amount raised in Series A and Seed transactions rose dramatically from $1.6 million in Q1 2016 to $4.6 million in Q2 2016, the highest median quarterly figure in the past five years.

Median amounts raised in Series B as well as Series C and later transactions remained relatively stable. The median Series B amount raised increased slightly from $8.2 million in Q1 2016 to $8.4 million in Q2 2016. Similarly, the median amount raised in Series C and later transactions increased slightly from $10.0 million to $10.2 million.

The use of senior liquidation preferences rose in Series B and later rounds, increasing modestly from 33% of all such rounds in 2015 to 40% in 1H 2016. The increase was particularly strong for down rounds, where Series B and later financings with a senior liquidation preference increased from 35% of all such transactions in 2015 to 45% for 1H 2016.

The percentage of financings having a liquidation preference with participation remained constant for all financings. More interestingly, the proportion of Series B and later up rounds with a participating preferred increased, while the proportion of down rounds plummeted from 47% in 2015 to 18% in 1H 2016. This may be a statistical anomaly resulting from the small number of down rounds in the first half of this year, or it may reflect decisions to forgo such rights in transactions where prior rounds also lacked such rights.

In addition, maturities for post-Series A loans lengthened. Maturities of exactly 12 months rose from 8% of all deals in 2015 to 31% in 1H 2016, although much of this increase came from a reduction in maturities of less than 12 months, which fell from 34% to 16%.

Compliments of WSGR – a member of the EACCNY