The third quarter of 2016 featured the reversal of several trends seen earlier in the year, most notably in pre-money valuations, which increased substantially for all rounds. The gain in pre-money valuations also drove a decline in the percentage of down rounds for the quarter, which fell to 9%, the lowest share in more than a year and far below the five-year median (from Q4 2011 through Q3 2016) of 16%. If these strong valuations continue through the fourth quarter, 2016 cumulative pre-money valuations may catch up to those of 2015. In addition, median dollar amounts raised are on track to exceed those of 2015 for all but Series C and later rounds.

Up and Down Rounds

Down rounds fell to their lowest percentage of overall deals in several quarters, representing 9% of post-Series A financings in Q3 2016, as compared to 16% in Q2, while flat rounds increased from 7% in Q2 to 12% in Q3. Seventy-nine percent of all financings were up rounds in Q3 2016, only slightly more than in Q2, and four percentage points above their five-year median of 75%. 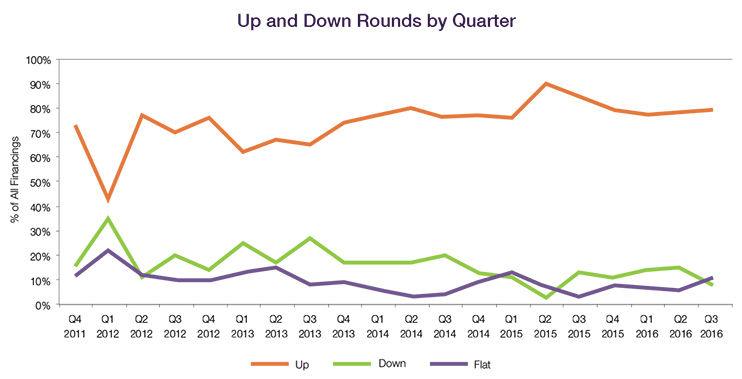 The percentage of financings having a liquidation preference with participation remained constant for all financings. The proportion of down rounds with participating liquidation preferences, however, remained at a low of 20% for Q1-Q3 2016. This may be a statistical anomaly resulting from the small number of down rounds so far this year, or it may reflect decisions to forgo such rights in transactions where prior rounds also lacked such rights.

Investors received broad-based, anti-dilution protection in 93% of all deals so far in 2016.

Data on deal terms such as liquidation preferences, dividends, and others are set forth in the table below. To see how the terms tracked in the table can be used in the context of a financing, we encourage you to draft a term sheet using our automated Term Sheet Generator, which is available in the Start-Ups and Venture Capital section of the firm’s website at www.wsgr.com. 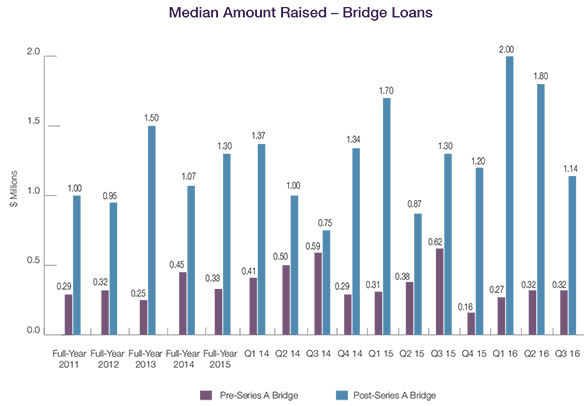 Compliments of Wilson Sonsini Goodrich & Rosati – a member of the EACCNY