Nutri Ventures Corp. has signed an agreement with Partnership for a Healthier America, a nonpartisan, nonprofit organization chaired by First Lady Michelle Obama. When Nutri Ventures and PHA announced the partnership during the Building a Healthier Future conference on March 13, Nutri Ventures pledged to work with the PHA on its core mission: promoting healthy eating habits in children.

To do this, all 29 episodes of “Nutri Ventures: The Quest for the 7 Kingdoms”, along with music videos and other digital features, will be made available for free to nearly 60,000 public elementary schools beginning in September.  All U.S. public elementary schools will have free access to the episodes, as well as Nutri Ventures characters for educational use and 200 additional pieces of nutrition-education material, which Nutri Ventures Corp. is creating.

This commitment, which Mrs. Obama praised in a speech to 1,000 PHA conference attendees, will bring Nutri Ventures to millions of elementary school-aged children. 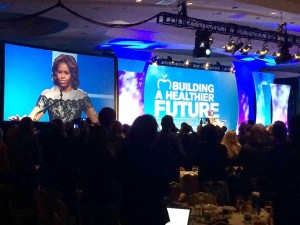 Lawrence Soler, CEO of Partnership for a Healthier America, stated, “Nutri Ventures is an important partner for PHA because it brings key health messages to kids in a way that is engaging and authentic.”

All 29 episodes of Nutri Ventures, as well as music videos and other digital features, can be found on Hulu at http://www.hulu.com/nutri-ventures. Ever since its debut in January, Nutri Ventures has been one of the most-watched series on Hulu Kids, and is building a strong U.S. audience as it continues to attract new viewers around the world. 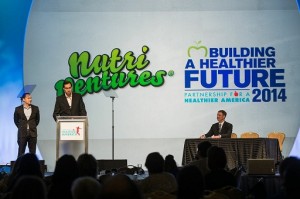 If you’d like to make sure YOUR local elementary school uses Nutri Ventures in its educational programs, send an email to PHA@nutri-ventures.com; be sure to include contact information for your school.

Nutri Ventures Corporation is a member of the EACCNY.