In the first half of 2011, the dollar volume of announced mergers worldwide neared its highest levels since the financial crisis. But that momentum proved fragile as deal volume tumbled 19 percent, to about $1.1 trillion, in the second half of 2011, compared with the same period the year before, according to Thomson Reuters data.

Now, with stock and credit markets steadier, deal makers are growing confident that 2012 will be better for business. Not only do they point to cheap financing and the large amounts of cash on corporate balance sheets, but they say that companies that have already cut costs may decide that they need to make acquisitions to drive growth in the face of a tepid economy.

“The dialogue has gotten back on track,” said Steven Baronoff, chairman of global mergers and acquisitions at Bank of America Merrill Lynch. “If Europe doesn’t go off the rails, you’ll see a return to long-term positive factors.”

According to a recent study by Ernst & Young, 36 percent of companies plan to pursue an acquisition this year.

“We’re optimistic that the need and desire for growth will overcome the volatility headwinds, but that’s where the battle will be waged,” said James C. Woolery, JPMorgan Chase’s co-head of North America mergers and acquisitions.

And there is pent-up demand among buyout shops. After a long stretch of tempered activity, many private equity firms are still feeling the pressure to deploy capital or engineer exits.

Still, companies that explore potential deals will most likely tread cautiously. For one, it remains unclear whether European leaders have done enough to ensure that the financial system remains stable on the Continent. And in the United States, 2012 is a presidential election year. With the White House at stake, companies in businesses like finance and health care may not pursue transactions until the outlook for regulation in those industries is clearer.

The outlook for mergers and acquisitions worldwide varies sharply by region, bankers say. The Americas, where deal volume rose 14.7 percent in 2011, will remain a bright spot, according to Mr. Baronoff of Bank of America Merrill Lynch.

Opinion is more divided over Europe, however. While economic and market woes will lead to some bargains and opportunities, deal-making may still be largely stifled by the persistent sovereign debt crisis.

“Europe is still a mess,” said David A. DeNunzio, vice chairman of Credit Suisse’s mergers and acquisitions group. “People thought there would be more divestiture activity as companies try to get more liquid, but that hasn’t happened yet.”

The disparities among regional economies is expected to fuel more cross-border transactions in 2012. While it is not a new trend for United States businesses to seek growth in emerging markets, bankers are starting to see a reverse in deal flow. After a string of strong quarters, cash-rich corporations in markets like Brazil and China are now bargain-hunting for established brands in developed markets.

“We weren’t having these conversations even three years ago,” said Mr. DeNunzio, who expects an increase of 10 to 15 percent in cross-border transactions.

“Many companies in China and Brazil see this as a once-in-a-lifetime opportunity to acquire world-scale brands at pretty attractive prices,” he said.

At the same time, companies are paying more attention to potential regulatory hurdles, whether their transaction plans are cross-border or domestic. The biggest setback in mergers and acquisitions of 2011 was AT&T’s aborted $39 billion purchase of T-Mobile USA from Deutsche Telekom, which met opposition from the Obama administration.

A deal announced early in 2011, the merger of NYSE Euronext and Deutsche Börse, remains in regulatory limbo as European authorities seek additional concessions.

Though signs point to a stronger mergers and acquisitions market, there is at least one class of deals not ready for a comeback: the highly leveraged buyout. In 2011, the private equity titans pursued more modest-size transactions, compared with the go-go years of 2005 to 2007.

Blackstone’s largest acquisition last year was the software maker Emdeon for $3 billion. Kohlberg Kravis Roberts’s biggest deal was even smaller, a $2.4 billion buyout of Capsugel. According to deal makers, buyout shops are still shopping, but banks are less willing to finance huge leveraged buyouts and boardrooms are hesitant to take on the risk. In the aftermath of the financial crisis, boardrooms are still worried that their companies will be left in the lurch if another Lehmanesque event happens.

“Boards used to say, ‘Yeah, go to lunch with L.B.O. firms when they call.’ Now they say, ‘No, you don’t have to do that,’ ” Mr. DeNunzio of Credit Suisse said. “Corporate directors have long memories.”

In 2011, the number of private equity deals announced was roughly flat, but the dollar volume fell 19 percent to $138.1 billion, according to a December report by Ernst & Young.

“And as much as we and our brethren walk with a lot of swagger, the reality is, these institutions and their risk managers need to shed risk-weighted assets, and that makes these types of transactions more difficult,” Mr. DeNunzio said.

Nevertheless, deal makers have been encouraged by the evidence that investors look favorably on mergers and acquisitions as a growth strategy. In the first six months of 2011, several acquirers recorded healthy gains in their stock prices on the day that deals were announced.

Notably, even Valeant Pharmaceuticals — which began a $5.7 billion hostile bid for the drug maker Cephalon in March — soared 10 percent on its announcement, a rare feat for a hostile buyer.

Over all, the global volume of mergers and acquisitions rose 7.6 percent last year, to $2.54 trillion, from 2010, according to Thomson Reuters. 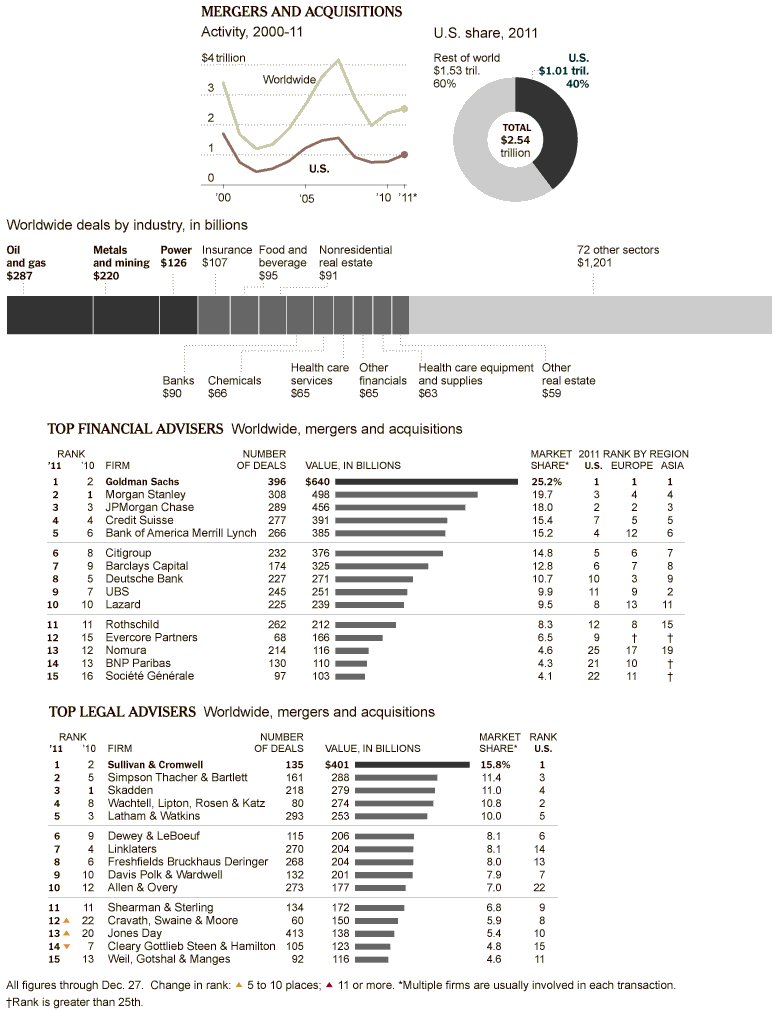 Deal volume tumbled in the second half of 2011, according to Thomson Reuters data, but deal makers are confident that 2012 will be better for business.