New York, NY, June 28, 2013 – The Foreign Policy Association (FPA) has awarded Pirelli Chairman and CEO Marco Tronchetti Provera the 2013 Social Responsibility Award for his ongoing endeavors in sustainability. Under Mr. Tronchetti’s leadership, Pirelli, one of the largest tire manufacturers in the world, has become a frontrunner in corporate social responsibility.

In addition to a perfect score in the FTSE Global and European sustainability indexes, Pirelli has maintained a global sustainability leadership position for the sixth year in a row on the Dow Jones Sustainability World and Europe indexes. Pirelli’s 2012 score in the Carbon Disclosure Leadership Index was 89, compared with a sector average of 69. Pirelli’s “Green Performance” strategy focuses heavily on environmentally–friendly, safe, and innovative processes and products. And Pirelli serves the community by promoting road safety and human developmentthrough sports and technical training, particularly in disadvantaged areas. 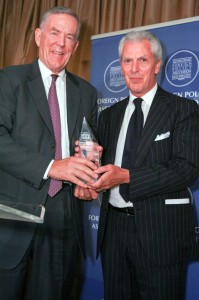 “It is with great pride that I receive this award on behalf of Pirelli C. S.p.A.,” commented Marco Tronchetti Provera. “As a company with a rich, and longstanding history, it now becomes our mission to create a sustainable future for generations to come. This vision could not be executed without the support of our staff around the world.”

Founded in 1918, the FPA celebrates its 95th anniversary this year. Its unwavering mission to serve as a catalyst for developing awareness, understanding of and informed opinion on U.S. foreign policy and global issues remains unchanged. Through its balanced, nonpartisan publications and programs, FPA encourages citizens to participate in the foreign policy process. To learn more about the Foreign Policy Association, please visit www.fpa.org.

PIRELLI
Founded in 1872, Pirelli is the fifth largest tire manufacturer in the world in terms of sales.  Present in over 160 countries, Pirelli has 22 tire manufacturing sites and employs approximately 37,000 people around the world. Pirelli is a leading producer of premium tires due to its commitment to R&D.  Successfully competing in motorsport since 1907, Pirelli is the exclusive supplier of the Superbike world championship, many single marquee championships around the world, and above all it is the sole supplier for the Formula 1 championship for the 3-year period 2011-13.