ONCE in a while an opinion poll throws up an insight that is very revealing; yesterday it was the Pew Global survey of European countries. 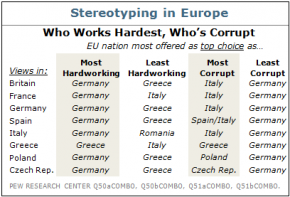 Among the usual questions about attitudes to the euro and the European Union, people in eight nations (Britain, France, Germany, the Czech Republic, Greece, Italy, Poland and Spain) were asked which country in the European Union is the hardest-working. The Greeks ignored the obvious answer (Germany) and instead nominated themselves. (The other seven nations all plumped for Germany, as the table shows.)

Yet Greek perception is not quite as misaligned with reality as it seems. Greece does actually work the longest hours in Europe, as this graphic of OECD data shows. However, as any economist will tell you, working longer does not equate with higher productivity, and Greece’s productivity is relatively low. The country’s predicament is also hindered by corruption. It is viewed as having the second-highest level of corruption after Italy, though Greeks reckon their country is the most corrupt of all.