In a joint letter to Heads of State and Government of the European Union ahead of this week’s European Council meeting, European Commission President Barroso and European Council President Van Rompuy inform about the key issues coming up for discussion at the G20 summit in Brisbane (Australia) on 15-16 November 2014: 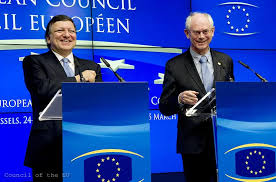 We would like to inform you about the key issues coming up for discussion at the G20 summit in Brisbane on 15-16 November.

The Brisbane Summit will be the first G20 summit that focuses on the transition from fighting the global crisis to supporting the recovery. The world economy continues to face significant challenges and we must continue to work to set growth on a higher, more stable and resilient path. The world has not yet recovered from the global financial crisis. This is why we need to agree on a consistent set of G20 growth strategies which help to put the G20 collectively on a higher growth trajectory overall. In addition, the Brisbane Summit will also need to deliver outcomes on resilience – in particular completing core financial reforms, and actions on tax and anti-corruption – and on action to strengthen cooperation with our G20 partners on trade and energy.

In Brisbane, the Eli should work towards strong results in the following priority areas:

1. G20 growth strategies need to be on top of the Brisbane agenda

We will push in Brisbane for the adoption of a strong Brisbane Action Plan on Growth and Jobs that draws upon the comprehensive growth strategies put forward by G20 members. G20 members should commit to fully implement the measures set out in their G20 growth strategies, and add new reforms where necessary. The Brisbane Action Plan should put in place a credible system of implementation monitoring, in order to ensure strong accountability going forward.

We will also make sure that G20 members continue their efforts to improve their fiscal strategies, so as to support growth and jobs, while putting debt as a share of GDP on a sustainable path, as agreed in St. Petersburg. Going forward, the EU will support work by the G20 to strengthen the focus on budgetary composition as regards both expenditure and revenues to make budgets more growth-friendly.

The EU in its contribution to the G20 Action Plan will put forward a package of substantial measures in line with the agreements under the European Semester. This should generate substantive positive spillovers to other members of the G20 and to the global economy more generally. Our contribution consists of: (i) finalisation and implementation of a genuine Banking Union; (ii) improving access to long-term investment finance in the EU as part of deepening of capital markets (iii) addressing high unemployment, in particular youth unemployment and facilitating labour mobility; (iv) further integrating the Single Market; and (v) advancing the multilateral and bilateral trade agenda. We will also emphasize to our G20 partners that the EU growth strategy is based on differentiated and growth-friendly fiscal strategies, making the best use of the existing flexibility in our rules, combined with structural reforms and targeted investment.

We will underline in Brisbane that fostering overall investment is a top priority for the EU. In the G20, investment actions have been combined into a coherent multi-year investment agenda to feed into Members’ growth strategies as an important deliverable for Brisbane. Improving the domestic investment climate remains a critical issue. We fully support in particular the facilitation of private sector investment in infrastructure and SMEs, to improve the ways to attract more investment from institutional investors for infrastructure projects and work on principles to promote safe, transparent and consistent securitisation supporting SME financing. The European Commission on 27 March 2014 published a Communication setting out policy actions the EU can take to promote long-term finance, which has provided a substantive contribution to G20 work.

Trade is a crucial engine of economic growth and job creation. We support the efforts of the Australian Presidency to ensure that G20 members’ growth strategies contain a robust set of trade-enhancing domestic reforms. At the same time, Leaders should also reaffirm their commitment to uphold the multilateral trading system and ensure that it keeps pace with the changing patterns of production and trade. In this regard, we believe that Leaders should first reaffirm their adherence to the Toronto pledge against protectionism with the view specifically to more vigorously roll back protectionism measures put in place in the aftermath of the global economic crisis. Furthermore, Leaders should recognize the importance of seizing opportunities to open markets and modernize rules through trade agreements at all levels, while ensuring that bilateral and regional initiatives are coherent with the multilateral rules. The EU remains committed to the full implementation of the Trade Facilitation Agreement and all other decisions reached at the WTO ministerial conference in Bali last December. While the preparation of a balanced work-programme to complete the Doha round of multilateral talks is of great importance to the EU, negotiations can only advance once the current stalemate surrounding the Trade Facilitation Agreement is resolved. In light of developments, we stand ready to strongly argue in favour of a clear message by G20 Leaders for the WTO negotiators to come quickly to an agreement on Trade Facilitation.

The EU also strongly supports the priorities of the G20 on Employment on boosting jobs and female participation; preventing structural unemployment; supporting youth employment; and better quality jobs. Encouraging women to participate to the labour market remains a priority for the EU Member States.

2. Financial regulation needs to be high on the agenda of Brisbane

In response to the financial crisis, the G20 has made great progress on a fundamental overhaul of the regulatory and supervisory framework of the financial sector. The EU has largely completed the implementation of the G20 commitments. However, the work on financial regulation will not be finished. All G20 members need to continue to implement the agreed reforms, enhance the oversight of shadow banking, finalise the derivatives reform and the work relating to systemic insurers. We also need to stay responsive to new challenges.

In Brisbane, we will look at a proposal for a loss absorption capacity for globally systemically important banks if they fail with the objective of ending too-big-to-fail, building on the agreement by G20 Finance Ministers in Cairns. This proposal will be subject to review after consultation and appropriate impact and feasibility analyses. There should also be progress on other policy strands including those to strengthen the oversight of shadow banking, in line with the roadmap agreed in St Petersburg.

We will reinforce the message for consistent implementation of agreed financial sector reforms by all G20 jurisdictions. Where cross border issues arise, we must work together based on the principle of deference, where regulatory jurisdictions should defer to one another when justified by the quality of their respective regimes and result in equivalent outcomes. Cooperation on cross border issues is particularly important in the area of derivatives markets.

We intend to support at the Brisbane summit further global action to tackle cross-border tax avoidance and tax evasion. This is both about the legitimacy of the G20, and to continue to ensure that our governments are able to deliver much needed services and infrastructure during times of constrained public budgets. Political commitment will be crucial for making further progress and pushing implementation. We need to continue work on the G20-OECD’s Action Plan on Base Erosion and Profit Shifting (BEPS) including on its implementation, which has started as set out in the OECD timetable. Following the delivery of the first phase of the BEPS work in September 2014, the G20 should ensure that further work remains on course. The expert group on taxation of the digital economy established by the European Commission released its report in May 2014, which underlines the importance of a successful completion of the BEPS actions for the digital economy.

We strongly welcome the endorsement by G20 Finance Ministers and Central Bank Governors of the full global standard package for automatic exchange of financial account information and their agreement to begin to exchange information automatically between each other and with other countries by 2017 or end-2018. The adoption by EU Member States of the revised Directive on Administrative Cooperation in the field of taxation will ensure that EU is fully aligned with the global standard. In parallel, we will push for maintaining political pressure on other countries, particularly on key financial centres, to ensure rapid implementation and thus a level playing field.

To a varying degree, G20 financial systems are still vulnerable to significant money laundering and terrorist financing risks. The G7/G20/OECD and EU efforts in these areas are mutually reinforcing. We are revising and enhancing the EU framework for combatting these phenomena, consistent with the Financial Action Task Force standards.

4. Progressing with reforms in other areas

We will emphasize that all EU Member States have fully ratified the 2010 IMF quota and governance reform. We will encourage IMF members which have not yet ratified the 2010 reforms to do so expeditiously, particularly the US. We will also strongly support the commitment of the IMFC and the G20 in April this year to maintain a strong and adequately resourced IMF. The EU also remains committed to continuing constructive discussions on the quota formula and the 15th Review of Quotas which should continue to be treated as an integrated package.

Finally, we will need to ensure that the good G20 work on development, anticorruption and energy matters continues. On development, we intend to push for the G20 to keep up its efforts to implement our food security commitments, work to reduce the cost of transferring remittances, strengthen infrastructure project preparation and ensure that developing countries reap the benefits from the G20 tax agenda. On energy matters, we will support a set of G20 principles for strengthening energy markets, and push for making further progress on incorporating energy efficiency actions into national growth strategies, improving the transparency of commodity markets and phasing out fossil fuel subsidies. In addition, we will argue for G20 Leaders to give a strong impulse for a robust and dynamic climate agreement at COP21 in 2015 in Paris.

We are determined to ensure that the Brisbane summit will be another step towards a sustainable recovery of the global economy. We are looking forward to constructive and cooperative discussions with our G20 partners in Brisbane.