Trade talks between the European Union and the U.S. won’t undermine essential protections for health and the environment, European Commission President Jose Barroso said an event today here in New York that was co-organised by the EACCNY and Bloomberg LP. The negotiations, which Barroso said will start before this summer, will target “unnecessary costs” created by differing regulations, as well as conventional trade barriers such as tariffs and quotas.

“We, on both sides, will not compromise on our high levels of health and safety standards, on consumer and environmental protection,” Barroso said in the text of a speech he gave today at Bloomberg headquarters in New York.

In February, President Barack Obama promised to pursue a trade agreement with the EU, and EU Trade Commissioner Karel De Gucht said the European bloc aims to complete the talks within two years.

Barroso, speaking later today in a Bloomberg TV interview with Sara Eisen, said faster progress is needed to create a banking union for the countries using the euro. The case of Cyprus, which was “over-dependent” on banking and is receiving a 10 billion-euro ($13 billion) rescue, is “unique and exceptional.”

Though transatlantic tariffs “are already fairly low,” 5.2 percent on average for the EU and 3.5 percent for the U.S., “even the slightest reduction has considerable impact,” Barroso said earlier in the speech.

The two sides will also seek a “living agreement” that prevents the creation of future regulatory barriers and puts in place a mechanism for further economic integration, the commission president said. The commission is the EU’s Brussels- based executive branch.

“If we manage to come to a comprehensive agreement, the overall gains could add up to a 0.5 percent increase in GDP for Europe and 0.4 percent for the U.S. by 2027,” Barroso said.

Trade and investment between the U.S. and the EU was valued at $4.5 trillion in 2011, the U.S. says. Still, the two sides have been at odds over issues including farm subsidies, health protections and regulatory standards. 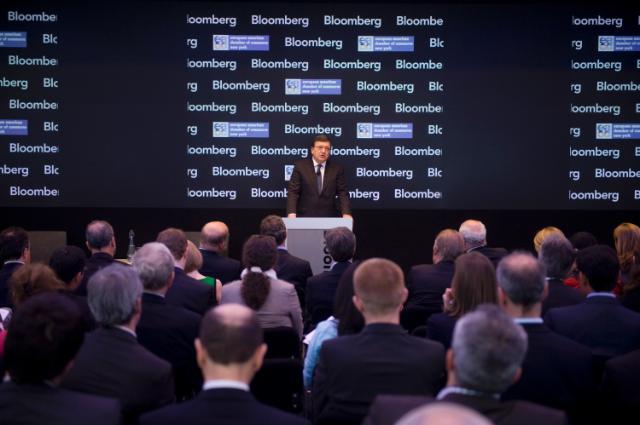 “We are expressly committed to using these negotiations to go beyond bilateral issues,” working together to strengthen intellectual property rights and jointly taking on other issues at the multilateral level, Barroso said.

The European debt crisis has forced the region to revise policies and public finances and strengthen the economic and monetary union “in a way that we were unable — in some cases unwilling — to do before,” Barroso said.

A write up & pictures of the event can be found here.

April 12 (Bloomberg) — European Commission President Jose Barroso talks about the outlook for trade talks between the European Union and the U.S. expected to start before this summer. Barroso speaks at an event at Bloomberg headquarters in New York that was co-organised by the European American Chamber of Commerce in Cooperation with Bloomberg LP.  (This report is an excerpt. Source: Bloomberg)

More about President Barroso and his agenda can be found here.