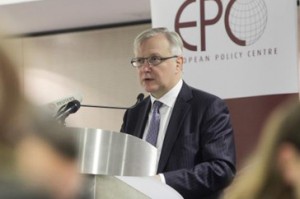 Speaking at the European Policy Center in Brussels today, European Commission Vice President Olli Rehn said that “2012 was a year of crisis, but it was also a year of progress. In 2013, we need to beat the crisis and take that progress to a new level.”

In particular, Vice President Rehn stressed the need to maintain the pace of economic reform to support the rebalancing of the eurozone, enhance competitiveness and boost investments in Europe, pursue growth-friendly fiscal consolidation, and build a deep and genuine Economic and Monetary Union.

“Our patient may be out of intensive care, but it will still take some time before she can be given a clean bill of health,” said Vice President Rehn. “That’s why any lapse into complacency would be unforgiveable. We need to stay the reform course to revitalize the European economy.”