The twelve 70ft yachts competing in the world’s longest ocean race gave a spectacular salute to New York today in a parade of sail in the Hudson along the iconic Lower Manhattan skyline and passed the Statue of Liberty. This is the final leg of the 11 month, 40,000-mile Clipper Round the World Yacht Race back to London where it started last September.

The Clipper Race is the only race of its kind in the world for amateur sailors, and many crew have no previous sailing experience before they sign up to the global race, known as one of the world’s toughest endurance challenges. Only the skippers are professionals. 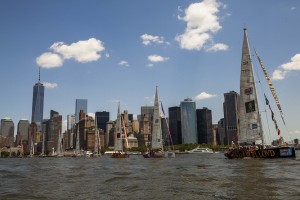 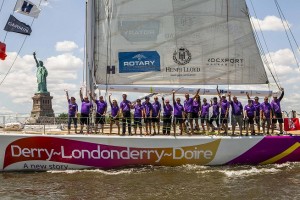 During their week long stopover in the city, more than 280 crew members from multiple nationalities soaked up the city and enjoyed a few days off their tough racing schedule to enjoy the sights and attractions, one of which included a special training session at the NYC FDNY Fire Academy.

On the classic race route across the Atlantic there is the potential for some very fast sailing. At the southern tip of Newfoundland are the Grand Banks, an area renowned for thick fog and light winds as the Labrador Current drags down cold water from the Arctic, this also brings with it the risk of icebergs. If the yachts can clear Newfoundland without going too far north, staying over the lower third of the Grand Banks and in the Gulf Stream, they will sail over the Flemish Cap made famous in the book and film The Perfect Storm.

Currently leading the overall race is North American crewed yacht Henri Lloyd which nominated New York as its home port. Its Canadian skipper Eric Holden said: “This has been a busy stopover in to our home port, I’m sure there are a few crew who are going to be sad to be leaving here so soon but it’s time to get going.

“Sailing up towards the Flemish Cap and Grand Banks for me is about sailing past my home waters of Halifax and not pulling in, it’s the closest we’ll get to Canada in this race and unfortunately I won’t be stopping.”

Following the Manhattan parade the teams motored out of the Hudson River to clear the very busy New York Harbour area to start Race 14 to Derry Londonderry offshore.

Speaking just before leaving North Cove Marina, skipper of fourth place team and home boat for the next stopover, Derry~Londonderry~Doire, Sean McCarter said: “I can’t wait to sail down the Foyle at the end of the race. I grew up in Derry-Londonderry it’s my home town but I’ve only sailed down the Foyle five or six times which is spectacular to do anyway, with beautiful views and sailing under the new bridge. It’s a great place to sail in to but to do it as the skipper of the home team on the race is something I will remember for the rest of my life and I know the crew will too.”
The Clipper Race fleet is expected to arrive in Derry-Londonderry from 21 June.

The final Clipper Race leg which is number, 8 of 8, is made up of three individual races. Crew will now race 2,850 miles across the Atlantic to Derry Londonderry, Northern Ireland to complete Race 14 of 16.

Race 15 then sees the fleet race to Den Helder, the Netherlands before the final, Race 16 sprint to London, where the Clipper Race will complete its epic journey at Tower Bridge on 12 July.

Clipper Ventures is a EACCNY Member