By Mathilde Defarges and Sally A. Painter, with Jeremiah J. Baronberg

“The miracle of the relationship between the United States and France is that we have never lost this special bond deeply rooted not only in our history, but also in our flesh. – President Macron in his speech to U.S. Congress, April 25, 2018 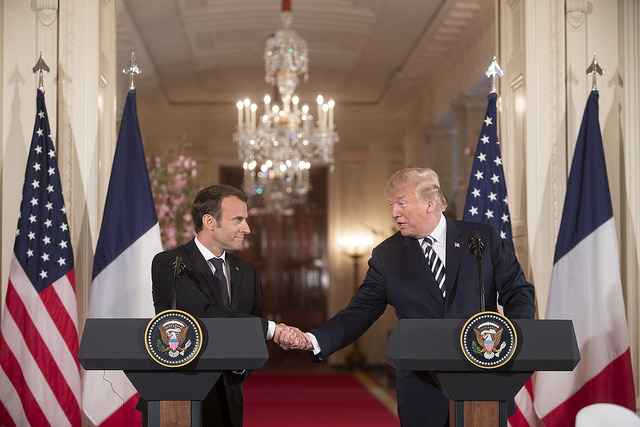 The French-American alliance was on theatrical display last week in Washington, DC, as President Emmanuel Macron and his wife Brigitte were fêted during an official U.S. state visit at the invitation of President Donald Trump, the first of his administration. The highly symbolic agenda contained numerous references to the historical relationship between the two nations—and featured a state dinner at the White House and private affair at Mount Vernon, a ceremonial tree-planting, a joint press conference with both presidents, and a meeting with Speaker of the House Paul Ryan, culminating in Macron’s impassioned speech (in perfect English, no less) before a joint session of U.S. Congress. Before jetting back to Paris, President Macron in rolled-up shirtsleeves—clearly basking in his element—held forth with university students in an informal town hall format before a packed basketball arena at The George Washington University.

What was the impact of Macron’s visit and what were its concrete outcomes?

In Washington, the enthusiasm for Macron—at times bordering on outright exuberance—was unmistakable. He was embraced and lauded by Trump, applauded by both political parties in Congress, and, with his cool, articulate, and youthful energy, enamored the next generation. At each venue, the French-American alliance was celebrated while the Transatlantic relationship seems to have received a much needed boost. Under his newly assertive leadership, economic reform proposals, and a bold vision for France’s expanded and unapologetic international role in global affairs, France is now very much back on the U.S. map, if not around the world. Moreover, Macron has clearly become the U.S. president’s favored leader and lynchpin for approaching Europe, having supplanted a weakened German Chancellor Angela Merkel and UK Prime Minister Theresa May. This fact should not be underestimated: the Trump-Macron personal affinity has the potential to play a stabilizing role and in addressing future challenges.

Yet for all its pomp and circumstance, the Macron visit also displayed palpable differences on matters of policy substance whose medium term milestones may be a more difficult measuring stick for the bilateral relationship. In his address to Congress, Macron highlighted the most salient ones: climate, multilateralism, the threat of trade wars and the corresponding May 1 deadline to exempt Europe from Trump’s steel tariffs (which has since been delayed by the U.S. to June 1), and the Iran nuclear deal, whose deadline of May 12 for certification by the U.S. is fast approaching. Macron appears to have tried to sway Trump on each. Whether he succeeds and how these specific issues play out could have significant impact and ramifications and should be watched closely.

In many respects, this can all be contrasted with Europe, where Macron was once again seen as positioning himself as the new, self-declared leader of the Member States of the European Union. Indeed, his speech before U.S. Congress was seen as being directed as much at European ears as American ones, echoing as it did his address to European Parliament the week prior. While a certain amount of pride was registered in his representing France (France is Back!) and speaking on behalf of the EU collectively, this sentiment clearly has another edge: that Macron assumed this leadership mantle without asking for it, posing as the bloc’s self-appointed leader, and has yet to convince the other 27 member states to agree with his vision on a range of policy matters. It seems that trying to lead the EU isn’t as simple as Macron may be publicly posturing. But that certainly hasn’t stopped him from trying.

Indeed, upon his arrival back in France, Macron was confronted with stark pushback on some of his signature proposals, including the so-called “GAFA” taxation (Google, Apple, Facebook, Amazon), which, following a meeting of the Eurozone Ministers, the EU’s Economic and Financial Affairs Council decided must be solved at a multilateral level through the OECD—a move that was supported by Germany and the UK, among others. Not to mention his proposal—referenced in his speech to Congress—to negotiate a new deal with Iran to contain its nuclear program, while also maintaining the existing framework. If his goal is to get Trump to stick with the Iran deal while effecting a compromise, President Macron is in fact not empowered to speak on behalf of the EU in this regard, let alone Turkey.

This has all been overshadowed by the threat of a trade war between Europe and the U.S., in part sparked by the Trump administration’s proposed steel and aluminum tariffs, which were set to take effect for the EU on May 1. At the last minute, President Trump postponed that decision by one month until June 1, granting the bloc a temporary exemption and more time to negotiate a deal that would fully exempt it from the tariffs. Previously, Germany has said that Ms. Merkel, Mr. Macron, and Ms. May had all agreed that if the steel tariffs were to enter into force, “The European Union should be ready to decisively defend its interests within the framework of multilateral trade rules” and had threatened to retaliate against more than $3 billion in U.S. exports. While the threat of retaliation seems to have been alleviated temporarily, the imperative now will be to arrive at a deal to avoid the U.S. tariffs entirely. The reaction from the European Commission to Monday’s temporary exemption was swift: “The EU should be fully and permanently exempted from these measures, as they cannot be justified on the grounds of national security,” it said in a statement.

Finally, it must be acknowledged that for all its reported fanfare, Macron’s close relationship with Trump has brought with it a not insignificant risk of backlash back home, where questions persist of “who is playing who” and how the two can be so close given their clear divide on matters of substance. This played out when President Trump congratulated Mr. Macron for his own immigration reform proposals, damaging him politically at a moment when his highly criticized domestic package had passed in a first reading at the National Assembly just the Sunday before. It seems a warm embrace by Mr. Trump is not always what the doctor ordered.

It is still too early to say if Macron’s U.S. visit—in which he publicly performed at his best—can be called a success. In the short term, the upcoming deadlines of May 12 (Iran deal) and June 1 (EU exemption on U.S. steel tariffs) will tell us more about President Macron’s influence on President Trump. Only time will tell how that special relationship between the two leaders will respond to challenges down the road. Regarding Macron’s leadership of Europe, there is a gap between his big picture vision and internal debates between EU member states. As the name of his political party “En Marche” underscores, President Macron’s vision is a work in progress.

By BlueStar Strategies, a member of the EACCNY