New York City was the host city for the latest event of the Pérez-Llorca/IE Chair on Commercial Law, which reflected on takeover bids, the best strategies for success and complications that arise with this type of transaction, all of which in the context of a comparison of the European and US legal frameworks.

Todd Crider, Partner at Simpson Thacher & Bartlett LLP, introduced the event and acted as moderator. The panel was also made up of four other speakers: Javier Carvajal, Partner of the Corporate practice at Pérez-Llorca; Kurt N. Simon, Global Chairman of Mergers and Acquisitions at JP Morgan; Alan M. Klein, Co-Head of the Mergers & Acquisitions practice at Simpson Thacher & Bartlett LLP; and Sara Sánchez, a lecturer at IE Law School.

Kurt N. Simon opened the Chair by presenting the situation in the US market in terms of M&A and Capital Market transactions. He discussed the lack of competitiveness of the previous US tax regulation and added that the new tax reform will hopefully result in an increase in competitiveness for the United States and an increase in the number of cross-border transactions. He also highlighted the significant growth in large transactions in the United States, in terms of both volume and quantity (63 % more than in 2017) and the cross-border transactions between the US and Europe (94 % more than in 2017). He noted the potential risk to the positive outlook derived from trade disputes. 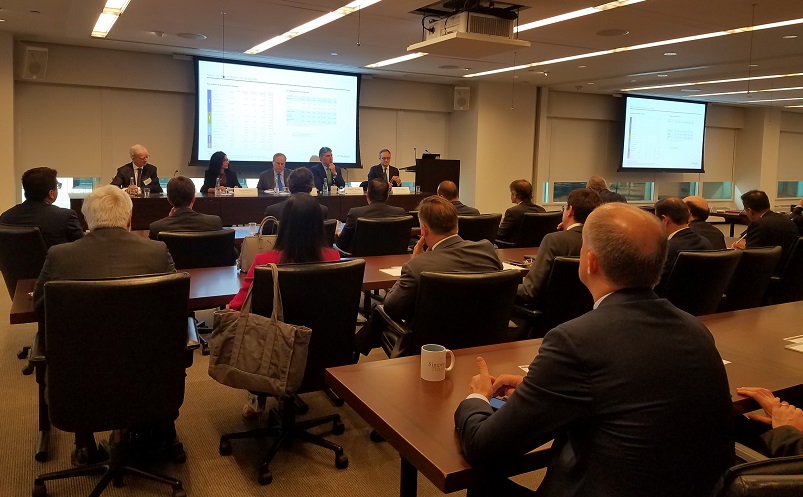 Sara Sánchez then explained the European legal framework that regulates takeover bids, focusing on three of the fundamental pillars of Directive 2004/25/EC of the European Parliament: the concept of control, the duty of passivity and defensive measures.  Todd Crider then led a discussion as to the differences between the regulation and practice of takeover bids in the North American and European markets.

Javier Carvajal provided a practitioners perspective and stressed that despite the different characteristics of each jurisdiction in the European Union, it is important for lawyers to speak the “same language” in relation to takeover bids. Alan Klein provided an overview of key differences between the EU and US approaches to takeover transactions, which yielded a useful exchange as to differences between the Spanish/European and US markets, covering issues such as dealing with the conflicts of interest that can arise in the administrative bodies of the company affected by a takeover bid, its fiduciary duties, minority protections, the implications of due diligence on acquisitions of control, as well as strategies for build-up processes in these types of transactions, and the implications in the US and Europe. They also discussed the implications of the expansion of activity of the Committee on Foreign Investment in the United States (CFIUS), and the difference in treatment of these subjects in the EU and especially in Spain.

This is the fourth Chair that Pérez-Llorca and IE have organised in the United States, following the opening of the firm’s New York office in October 2015.

The Pérez-Llorca/IE Chair on Commercial Law focuses on international legal practice. Its main objective is to produce top-tier applied research in the area of Commercial Law, as well as to share this research with law firms, businesses and law schools, through the work and joint activities carried out by IE Law School and Pérez-Llorca.