The twelve international crews competing in the Clipper 2013-14 Round the World Yacht Race will arrive in Manhattan on June 4, following a brief muster in New Jersey, after completing more than three quarters of its eleven month, 40,000 mile global ocean odyssey. 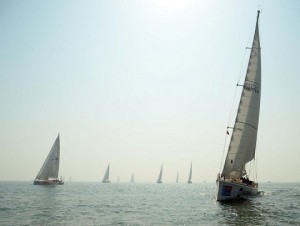 Established by legendary British sailor Sir Robin Knox-Johnston in 1995, the Clipper Race is uniquely designed for amateur sailors (only the skippers are professional), whose only required qualifications include a thirst for adventure and the desire to complete one of the world’s toughest endurance challenges. 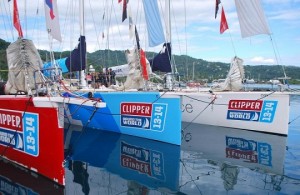 While crews may be amateur, the seas they face are anything but. Since the race departed London on September 1, 2013, teams have battled ferocious storms in some of the world’s most remote oceans and faced life challenging situations, including the dramatic yet gladly successful rescue mission of a crew member who went overboard in the middle of the Pacific.

New York is a particularly significant milestone in the race. After a brief stopover, the fleet’s departure from Manhattan’s North Cove Marina on June 7 will mark the highly anticipated start of the final, homecoming race Leg which will return crew members to London’s Tower Bridge on July 12 as triumphant circumnavigators.

May 30 – June 1: The Clipper Race fleet will first arrive and muster in Liberty Landing Marina, New Jersey from May 30 after completing Race 13 from Jamaica. (See June 4 for official arrival into Manhattan)

June 3, 6:00 pm – 8:00 pm: Free, open boat opportunity at Liberty Landing Marina, New Jersey.
>> Providing public with the chance to get a personal tour on board one of the 70-foot round the world yachts as crew members explain and demonstrate life on board these stripped out ocean racers.

June 4, AM (Time TBC): Official fleet arrival to New York City, North Cove Marina.
>> The world famous British sailor Sir Robin Knox-Johnston, the first man to sail solo, nonstop round the world in 1968/69 and the Clipper Race chairman and founder will be present at the occasion.

6:00 pm – 8:00 pm: Free, open boat opportunity at North Cove Marina, New Jersey.
>> Providing New York City public the chance to get a personal tour on board one of the 70-foot round the world yachts as crew members explain and demonstrate life on board these stripped out ocean racers.

11:00 am – First boat slips lines from North Cove Marina
12:15-12:45 pm – Fleet parade of sail past the iconic New York skyline and Statue of Liberty from North Cove to Governors Island

Designed to provide everyone, regardless of sailing history, the chance to experience the exhilaration of circumnavigation, the Clipper Race was founded by legendary British sailor Sir Robin Knox-Johnston and has turned almost 4,000 novices into ocean racers since its inception in 1995. This is where teachers, sports stars, bankers, lorry drivers, nurses, web designers and more, team together to take on the world’s toughest sailing conditions. The only professionals on board are the skippers.

Since leaving London, the teams have raced via Brest in France, Rio de Janeiro, Cape Town, Australia, including the classic Rolex Sydney Hobart Yacht Race, Singapore, Qingdao in China and San Francisco. The fleet is currently on its way down the Central American Coast, where it will transit the Panama Canal to continue via Jamaica, New York, Derry Londonderry in Northern Ireland and Den Helder in The Netherlands before returning home and completing its circumnavigation with a victory parade up the Thames to London’s Tower Bridge on July 12.

Points are accumulated in a Formula 1-style scoring system. The yacht with the highest total points at the finish wins the Clipper Race Trophy.

Clipper Ventures is a member of the EACC New York